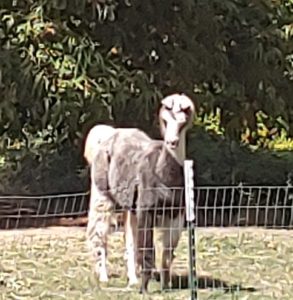 Today, the farm said an unexpected good-bye to Scout, the blind llama.

This truly took me by surprise. Scout, who arrived with his buddy Kali in mid-July, had been doing really well, or so I thought. He had been steadily getting stronger and was putting on weight, which was a blessing. I’d seen him both grazing and browsing (eating leaves off the trees). He’d even begun wandering out of the back pasture, following Kali to explore the center pasture. Although he was never friendly, he and I had found a comfortable routine. At feeding time, I’d start calling to him as I entered the pasture, to avoid startling him. Then, I’d drop his chunk of hay as loudly as I could and back away, clapping my hands, calling, “Come on, Scout. Here it is!” Nose to the ground, he’d follow the noise until he found his hay.

On Friday night after the llamas had eaten, I noticed that Scout had gone to sit in the dusty spot where the two of them took their dust baths. That was different. Saturday morning, he was still sitting there. I dropped his hay and called. He didn’t get up.

Radha, who adores Scout, ran to him and pressed her nose against his unexpectedly available muzzle. That would have usually caused Scout to stumble swiftly to his feet and try to escape her. Instead, he pointed his nose to the sky, his neck arched as if he meant to lay his head on his back.

That action was so reminiscent of what I’d seen while critters were dying that I dragged Radha away from Scout, then went to touch his nose. Now that should definitely have driven him instantly to his feet. He never allowed me to touch him. This time, all he did was turn his head to the side.

By then, Kali noticed what was going on and started toward us. Knowing just how violently protective he is of his blind buddy, I backed off and went to fetch Scout’s meal and a bucket of water. Much to my surprise, Scout nibbled at the hay I put in front of him. I left him, hoping this was nothing but certain it wasn’t. That evening I was determined to get Scout on his feet, to see if there was any obvious injury. It took a good amount of prodding, but he started to rise. Just as he reached his feet, his back legs began to wobble so badly that he instantly collapsed back onto the ground. It made me wonder if he’d broken a hip.

As Scout fell Radha, who had again come to spend time with her reluctant friend, immediately dropped into the livestock guardian dog’s “watch” position. Everything about the way she sat said that this animal– her friend– was in serious trouble and needed to be protected. Kali came rushing over and placed his feet on either side of Scout’s body. He looked from me to Radha, not quite threatening, but letting us know that we shouldn’t get any closer.

I sighed as I studied Scout. Unlike Kali, who looks like a normal llama, everything about Scout is misshapen. His hips are too high, his face is long and narrow.  His teeth had grown every which way and poked at odd angles out of his mouth, no doubt making eating and chewing difficult for him. Flies crawled up and down his nose, intruding into his unseeing but open eyes.

Again, I sighed. Injured or not, I know that ruminants like cows, sheep, and llamas must walk to digest. The longer they are down, the sicker they get until they eventually die. I’d give Scout one more day to find his feet, then it would be time.

Many thanks to Ernesto Castro from Tres Hermanas Ranch for bringing over his backhoe and helping to put Scout to rest. Farewell, Scout. May you enter your eternal green pastures walking easily, eating as much as you want, and seeing every last blade of grass in front of your nose.