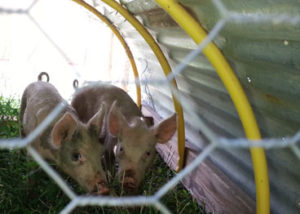 Years ago, I heard an NPR article about a hog rescue farm.  The farmer said (and I’m paraphrasing), “Dogs have masters, cats have servants but a pig thinks everyone’s a pig.”  That, and years of reading Mother Earth News, sparked my fascination with pigs.  Or rather hogs.  Only porcine babies are known as pigs.  Once they’re weaned they’re known as weaners or shoats.  Females that haven’t had babies are gilts and males that won’t be making babies are barrows or bars.  Sows are mamas and boars are daddies.

So, I just brought home two little weaner pigs, both gilts. And before you ask, yes, they will both be meat.  Okay, as silly as this sounds, I’m positively giddy about raising these little girls.

Or maybe it was the smell in the car on the way home from Chino Valley that had my head spinning.  Holy smokes or rather, stinky pig!  These little girls weigh in at about 30 pounds each, a little on the small size, but in their fright at suddenly finding themselves in a dog crate going around the hairpin curves between Jerome and Prescott Valley, they left quite the mess.  Let me say, it was better to be hot and breathe than close the windows, turn on the AC and gag. As we made our way back over the mountain one of the girls kept making a funny snorting sound.  At first I was afraid she had the sniffles, which, according to my book on pigs (yes, I am once again teaching myself about raising hogs via the written word), might indicate respiratory problems.  Not.  I think she was carsick.  Once we hit Cottonwood there wasn’t another sound from her.

Once I made it home, I drove down to the orchard, where I had already set up their new home–their own personal hog tractor.  What, you might ask, is a hog tractor?  It’s a home on wheels.  While they’re little, it will keep them contained and safe on a 12 foot by 5 foot patch of ground until they’ve grazed the grass down.  Once they’ve eaten up the grass, turned the soil while looking for worms and left the same stuff on the ground that they left in the dog crate, I’ll grab the rope handle of their home and move them forward 12 feet.

I don’t have much hope that the tractor will last all the way through this season.  It started life as a chicken tractor built by my friends Kai and Meghan.  It’s mostly corrugated and chicken wire.  Because these are pigs and not chickens, some alterations were necessary. 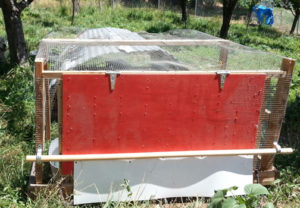 Gulp.  It was my first attempt at building anything, and let me say I have a far way to go before I master power tools.  That said, I’ve now got a working familiarity with drills, hands saws, a sawsall, and whatever the heck that saw in the middle of the work bench is called.  I really wanted to try out the table saw–I would have liked to have cut a long piece of wood in half. But I just couldn’t get up the courage to try it on my own.  The refrain, “You’ll shoot your eye out” from A Christmas Story became “You’ll cut your hand off”….  So I punted and kluged together this and that until I got what I wanted.

The original tractor now has hardware cloth in place of chicken wire on the uncovered front as well as an attractive red door that’s wide enough to let a good sized hog pass.  It’s not a sturdy piece of wood, so I went back to my roots and gave it the modern version of a Medieval door lock: a piece of wooden round closet rod held in place by braces.

But, the tractor isn’t really meant to keep them confined, day in day out.  They’ll only live in it until they’re big enough to protect themselves and/or win over Moosie.  (He was way too excited to see them in their little house. It took me a bit to realize he thought they were Javelina, which he chases.)  My intention is to use my electric tape fence to confine them on a good-sized area of the pasture while they sleep in their little camping trailer.  When they’re grazed out that piece of pasture, I’ll move them to the next area.

And what do the girls think of their new home?  Well, I manhandled the dog crate out of my trusty Ford Focus, dragged it to the opening of their tractor, opened the crate and tried to dump them out.  They clung like limpets, which is kind of strange.  How did they do that with hooves? Humph.

I dragged the crate back out of the tractor doorway, upended it and grabbed the black spotted one by her back feet.  She grunted in surprise, but before she knew what was happening, she found herself in the shady end of her new home.  Her wattled sister followed with a screeching “You’re killing me!” squeal. (That didn’t help much with Moosie.)  I sent her to the back of the tractor as well.

Silence followed.  I quickly fastened the door and beat back Moosie, then made my way around to the shady end of the tractor. Both girls had their snouts deep in the calf-high grass and were audibly snuffling.  Then I heard it.  Smack, smack smack, crunch.  My book suggested that moving them was likely to put them off their food for a while.  Apparently not when they go from eating alfalfa and pig chow to fresh grass.

It’s been an hour now and the last time I went down to check on them, they came up to the chicken wire barrier to press their snouts to the dogs’ noses.  Even I got a long once over, although I suspect it might be a while before they forgive me for that ride.  I tried throwing them a few apples, but they’re still examining the grass, tasting this and that, to inspect those little green balls might be. Once they do, I’ll have them eating out of my hand…literally.

← We’re all melting
Boinker and Oinker →