It’s official. Rupert is here to stay. Just as I expected, a full week plus a few days on the farm has made a world of difference for him. Between his new anti-inflammation diet and the Hyaluronic Acid, he’s s now able to hold his hips where they belong as he walks. Even better he no longer drags his front paws and I’ve watched the swelling in his ankle joints diminish day by day. Best of all, I swear he’s already grown at least two inches taller.

As for Rupert, he’s staying no matter what I might want. Nor would Radha ever let him go. She loves her new puppy! Because Rupert is still small enough to slip through the gates, he spends his nights on the porch (in a very well insulated and comfy crate). Radha waits eagerly for him to appear in the morning. It’s hard to believe, but she’s more excited to see him than she is her food, and that’s saying something for Radha. This morning she was so intent on Rupert that she entirely forgot to eat. To promote this puppy love, I’m allowing Radha (and Bear) in the house during the day. She and Rupert keep us on our toes, chasing cats, stealing shoes and racing after each other. When Rupert tires, the two puppies curl together in a chair and play bite at each other. Now that’s true joy!

Speaking of joy, Christina and I finished the third rabbit tractor last night and just had to move the rabbits into them. While Christina held the cat carrier, I snagged Bitsy. I grabbed her by the scruff of her neck and then–mistakenly–tried to put her into the carrier head first. You know, those rabbits have sat on their feet almost the whole time they’ve been here. I’d forgotten just how LARGE their feet are. As I got her head into the crate, she splayed those big back feet over the edge of the carrier’s opening, and there we were–stuck. Cursing mightily, I pulled her out, praying I didn’t lose my hold on her, and turned her to lower her butt first into the carrier. Since she couldn’t see the opening, she didn’t move her feet. Aha! Gotcha!

Unfortunately, Babs was now on alert. Even before I opened her cage, she was dashing this way and that. But it is a cage, and really, there wasn’t any escape for her. I had her by the scruff in a moment and put her in her crate. We decided –well, I decided, since I was sure Buddy was going to be the hard one– it was better to move the girls first, rather than try to juggle three carriers. It took the girls about 3 seconds before they realized what was up. They instantly began to explore, smelling the grass beneath their feet, and taking in their little private area. We locked their lids and left to them touching their noses to those of the dogs, who had come to “help,” and went back for Buddy.

Even more unfortunately, he’d not only seen what had happened to his girls, he’d had time to consider his escape plan. I steeled myself for battle, fully expecting to be scratched. Much to my surprise, I managed to get a good handful of his scruff on my first grab. Then just like that, he was traveling to his new home as the sun was going down. Unlike the girls, he immediately dashed into the back of his home and hid while we installed their feeders and waterers. 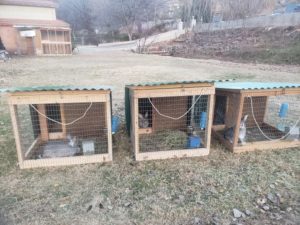 When I went out at dawn I was thrilled to see all three of them in the front to greet me at dawn, despite the cold. When I opened Buddy’s lid to add food to feeder, he gave me the stink eye and hurried back to hid. The girls both stood up to look up at the sky as I fed them. Because of Buddy, I left moving them until midday. By then, the sun was shining and it was almost warm. All three of them were sitting in their front area, sprawled in the sunlight, something that made me grin. I grabbed the rope on Buddy’s tractor and slowly wiggled his home forward. He again dashed back into his hideyhole, but the moment his home stopped moving, he was out again. Both Babs and Bitsy sat in their doorways and watched as their view of the world changed by three feet.  Bitsy went back to sunning herself while Babs explored her new bit of ground by tasting each and every one of the leaves that had appeared beneath her feet.

Yay! More than yay! My home-made, home-designed rabbit tractors are everything I wanted them to be, both for me and for them. So I guess the title of today’s post should have been “Happy puppies, happy bunnies, happy human.”

And now it’s time to clean the barn in preparation for the next project–a baby bunny rabbit tractor.