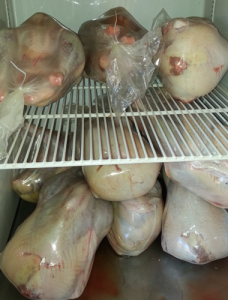 Harvest time.  Euphemistic, I know.  Over the last four days I’ve processed 49 birds, not all of them mine.  My personal best was 17 birds in one day.  That was the day I decided my limit is 16 birds a day.  I had to slather my hands with Traumeel to get my fingers to bend at that night.  Thank heavens the weather held.  The first two days were perfect.  Two mornings ago I had to drum my fingers in impatience waiting on frozen hoses to thaw until I remembered I have a hot water spigot outside. Yesterday, I started slaughtering wearing a shirt, sweatshirt, coat and down vest under my apron.  By the middle of the day I was thinking about changing into a tee-shirt.  Arizona!

These last days have been no easier on Tom than me.  As he did for last year’s “harvest”, Tom carefully kept his flock at the far end of the property, where they can’t see what’s happening.  If you think this is an accident or coincidence, let me assure you it’s not.  He’s not stupid and neither are they.  When I’m finished, he’ll bring his few remaining sons up to review the slaughtering area and say their good-byes.  Once they’ve done that, they’ll settle in for the winter.

Now that the work is done, it’s time to think about what went right and what went wrong.  Strongly In the “right” column is allowing the hens to raise their own broods.  Needless to say, free poults is a good thing.  In the wrong column was my inability to get the girls to nest where I want them.  Still, even with mountain lion attrition, I ended up with 140 birds in May.  That number descended through accidents, dogs and predators, to 80 birds by Autumn.  Given that I can apparently only do 50 birds within the window for supplying fresh (never frozen) birds for Thanksgiving, I actually think 80 birds is a good number.  Over the winter, I’m going to build nesting boxes in the permanent turkey coop.  I’ve never been successful moving the hens and eggs–the hens all abandoned “touched” eggs–but maybe locking them into the coop with their clutches will force the issue.

Another couple of ticks in the “right” column was feeding them at night and accidentally installing a gate in the middle of the not-so-permanent coop.  Not only did I have no turkeys roosting in trees, but I was able to lock the birds I meant to process inside that small interior coop.

A huge tick in the “wrong” column is the cost of the feed.  For my peace of mind and my health, I need all my birds (and other animals for that matter) to eat non-GMO feed.  I’d love to be all Organic, and the birds do love the Modesto Milling Organic food, but a grown bird will take 1/2 pound of food a day, especially after the grass and insects die off.  I found myself supplementing with local non-GMO feed when I realized just how much I was spending.  Frankly, raising your own birds isn’t cheap–and it shouldn’t be, despite what Big Ag would have the world think.  It’s the GIGO (garbage in, garbage out) principle. Every one of the birds I processed had a thick layer of fat, which is where the body stores all the vitamins and minerals. So I’m assured that eating their meat and making broth from their bones will supply me with what I need to stay healthy.  I guess I’m trading my profit for my health, but it’s a good trade and I believe it’s saving me money in the long run.  I haven’t had so much as a cold in three years, not since I started eating what I produce.

One thing I am considering for next year is selling a lot more poults.  That’s easy profit and no long term food costs.  But, I like the babies, even though I spend the first month of their lives turning over the ones that have been knocked onto their backs and can’t get up (that’s a serious turkey-design flaw; they can’t right themselves until their little wings develop), or leaping into the water to catch the ones who’ve fallen into the ditch.  Why, oh why, do the mothers nesting across the water always try to get their newly-hatched babies to fly over?

I guess it all comes down to me being a sucker for turkeys. No matter what it costs me, I can’t imagine not raising them. So no matter how the “right” and “wrong” columns balance out, my plan is to winnow the flock down to Tom and 20 hens including the two moms who are presently poults, but not including their 10 babies.   On New Year’s Day I’ll look at that turkey coop and once again spew a farmer’s mantra: “This year!”