For the last month I’ve been moaning and complaining about the cats.  No, not the eight house cats I’ve got, all of which were intended to be barn cats and all of which individually decided that living in the house and sleeping in my bed with me was a far better life.  The big cats.  The mountain lion and the bobcat.  I saw the bobcat last week on the opposite side of the fence at dawn.  It was carrying something that looked mammal-like but too small to be a pretend barn cat.  Whew.

I’ve never seen the lion, but over the course of the past three years my neighbors on either side have.  I know why she originally came down from the barren, rocky hill across the road from me every summer.  She was following the deer.  The deer come down to eat the lush grass that covers Oak Creek Island.  Never heard of Oak Creek Island?  That’s because there really isn’t a bit of land with that name, but there is an island in Oak Creek.  About two houses up from me along the creek (that’s three-quarters of a mile or so) Oak Creek splits, creating a long narrow island.  I own about a half an acre on it and I hope it stays that way.  I’d much rather have the creek running through my property than have that unreachable half an acre.

But back to the deer.  Before the farm came to be, when the house was empty for most of the time, the deer would come down to cavort beneath the massive cottonwood that stands at the back of the property.  I know this because the first summer I lived in the house, I was able to sit on the porch and watch said deer doing their deer dances beneath that cottonwood.  I also knew about the mountain lion because my neighbor across the road took a photo of the big cat as she skirted the edge of their property on her way down to admire the cavorting deer…for very different reasons than me, of course.

Then the fences came to be and the deer stopped their cavorting but the lion kept coming, or so say my neighbors.  After all there were chickens to eat, and a five foot tall fence is an easy leap for a lion.  The dogs help, but there’s a lot of land between their precious porch and that cottonwood.  Plenty of time for the lion to take her chicken–or turkey as she’s been doing consistently this month.  I figure I’ve lost twenty, most of them sitting hens, because turkeys stubbornly prefer to nest in the wild, squeezing themselves beneath blackberry tangles, or under fallen logs, or under the potting table in my now-overgrown garden.  I even had one try to nest in a discarded colander on the top of an unused workbench.  Every time she got out of the colander, her eggs would spill. It took a week of removing her from the workbench before she accepted that I really wasn’t going to let her sit there.

And then a miracle.  Every evening I do the same crossfit routine:  chase the turkeys into their coop.  This routine includes sprinting, squatting, twisting, waving my arms and generally looking ridiculous.  But it’s absolutely vital.  The minute the turkeys realize they can roost in the trees all is lost.  If I can’t catch them, they don’t turn into somebody’s Thanksgiving dinner.

Tonight’s routine was going better than last night’s, when the cows broke into the turkey coop to steal the turkey food, with half of my eighty or so birds already happily contained when I heard the sound.  Just like human mamas, turkey mamas speak to their babies in baby talk. They coo and make high-pitched “pripping” sounds.  And there she was, one of my younger hens proudly shepherding eight newly hatched turkeys toward the safety of the flock.  I snatched up the babies and carried them toward my presently empty back coop, which is perfect for them.  Mama followed, crying in distress until I opened the door to the coop.  Her eyes lit up and she led the babies inside the building and settled on top of them. 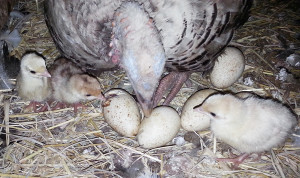 Because this is my third year with turkeys, I knew she’d left behind a few eggs.  They always do.  So I scouted the huge woodpile at the back of the property.  Sure enough, she’d wedged herself beneath a bunch of branches.  Among the rotten eggs was one chick breaking out of its shell and peeping away–most likely because it had stopped hearing its mother’s voice.  I carried it to the coop and opened the door.  Mama hissed until she heard the peeping, then she lifted up and let me tuck the half-open egg, and three more potentially viable eggs, beneath her. She was happily pushing them into place when I closed the door, while the peeper’s siblings were given the newcomer the eye.

A miracle indeed, both that the lion didn’t take her and that I have half my missing birds back again!