Dang it, I just finished editing the print version of the book and opened this page to start this post, only to remember that I have water running on my trees.  That is how the whole day has gone from 4 AM onward.  For some ridiculous reason, I had it in my head that actually writing the last words of my book meant I was finished. HA! But I couldn’t let another Monday come and go without a post. Last Monday I was turning six pages into twenty-five and breaking my concentration just wasn’t an option. So here I am at sunset, squeezing in this note.

It’s now been more than three weeks since Cinco last head-butted me.  Whoot!  Oh, wait!  That’s because I didn’t dare let him.

Right at the end of a book I begin to worry about silly things, like, maybe the house will burn down and I’ll lose my computer. Or the ram will headbutt me and break my arm.  A couple of years ago I had to refuse to help milk a cow with mastitis because she was kicking and I was terrified I’d end up in a cast.  Also,  the end of the book cuts into my walks down to the pastures. These last weeks all I’ve managed to do was morning and evening chores.  Tom has missed me.  He now refuses to enter the coop unless I carry him. Such a baby!

The piggy girls have also suffered from farmer-deprivation. This has caused some misbehavior around my refilling of the waterers I use for the turkey coop. The minute the piggies see me at the hose, and they come loaded for human.  One of them steals the base of the waterer, another drinks the water out of the reservoir right after I finish filling it and before I can get the base back on, while a third one runs off with the hose. But in the two weeks that I’ve had my attention elsewhere, I swear they’ve doubled in size! They’ve also almost finished turning my winter garden for me. 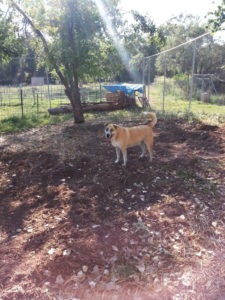 Over the summer, I’ve been dumping the straw from the chicken coop in that area. They thought this was great and turned it into bedding, which seemed to go a long way toward breaking it down. Then, when it was no longer fun to lay in, they’d start working it into the soil. In the process, they removed the quack grass that showed up again, noshed on the bermuda roots and eliminated most of the other annoying weeds, except the silver nightshade and the volunteer pumpkins. Oddly enough, the sheep have become fond of both. They’ve eaten all the pumpkins and nibble the leaves off the silver nightshade, even if there’s something more palatable right next to it.

Speaking of the sheep, Peanut brought his flock into the house a few days ago. The morning was beautiful and cool, so I had opened the doors that face the road. Apparently, I forgot to put the barrier in place that keeps them in the middle pasture and they came up the stairs. I kept hearing this tap-tap-tap, tap-taptapapapta-tap around the corner from my desk. I thought one of the cats had a toy, so I ignored it for a few minutes until it got so loud that I finally went to look. There was Peanut, right around the corner from my desk, on his way to say “hi”. Cinco was hanging back, having never seen a house before. Mari and her mother Tiny were in the doorway to the commercial kitchen, both of them with their heads cocked as if to say “What the heck is this place?” All it took to send them on their way was a clap of my hands. Well, except Peanut, who wanted some head scratches before he agreed to leave. (And I forgot to take a picture, double dang it!)

Two days later, they found their way around that barrier again. Peanut! I watch him studying that bit of fencing, gauging just how contorted he has to be to work his way around it. The others aren’t as smart, but if he figures it out, they follow. This time, I’d left the small barn door open. Half a bale of alfalfa later, there were sheep turds everywhere. They’d tried every open bag of feed I had, but couldn’t get to the good stuff–the chicken food and the pig food–thank heavens.  Smart sheep, stupid shepherd.

First thing on the list of “must get done before I start another book” is figuring out a sheep-proof barrier. No sweat.  I’ve got two weeks.