Did you know a dog can be a hypochondriac? I didn’t. At least, I didn’t until last week. Okay, in all fairness to Rupert, he is a vaccine-injured dog. (He actually has an exemption from having vaccines until he’s 18 months old.) It’s entirely possible that the vaccine that temporarily paralyzed him also left his nerves more sensitive to pain.

It happened Friday evening after the dogs had eaten their dinner, which was raw chicken as it so often is. After eating, Rupert climbed into his favorite chair (which is also my new guy’s favorite chair), which is next to my desk, and went to sleep. An hour or so later he whined and looked up at me without moving his chin off the chair arm. I thought he was begging for a pat, so I gave him some love. A little while later, he whined more persistently and got more love for his effort. That’s when my new guy came in and commanded Rupert to get out of the chair. When there was no response from Rupert, my guy took him by the collar and began to slide him off the seat.

Rupert didn’t yelp, he screamed as he slid bonelessly onto the floor, then laid on the floor without moving. He was shivering.

Both of us dropped down next to him to see if we could figure out was wrong. After a thorough investigation, I came up with two possibilities. The first was that he hadn’t properly chewed up his chicken and a bone was caught somewhere in his digestive system. Although possible, I couldn’t believe it. I’ve fed my dogs raw meat and bones for ten years now and never once had anything near to that happen. The other possibility was that Rupie had pulled a “Moosie,” and tried to climb a tree. And, just like Moosie, he’d injured his right shoulder.

Rupert and Radha have only recently discovered squirrels. More importantly, they’ve discovered that squirrels climb trees to escape them. Over the last two weeks I’ve seen both them standing on their hind legs, their front paws braced as high on a tree trunk as possible, as they stare up into the branches watching the escaping critter.

With no emergency vet nearby, I did what I could for the little guy. I found a mild anti-inflammatory in my vet supplies and some dog CBD, then settled Rupie on a blanket for the night. The CBD calmed him and before long, the shivering stopped. At midnight I went to check on him. He was sound asleep. I stroked him and his eyes opened. A moment later he again began to shiver. I gave him another dose of CBD and went back to bed. A few hours later when I checked on him again, I found him curled in a tight ball. I  breathed in relief. If he could do that, it wasn’t his gut.

Sure enough, this time when I stroked him, he looked at me pleadingly and held up his right front leg. My relief grew. He was going to be fine and more importantly, so I was.

As annoyingly yappy and terrier-like as Rupie is, he’s perfect for Radha and they are forever bonded. If Radha lost her little chew toy, I doubt my overly energetic and dominant Anatolian Shepherd would easily accept another dog on the property. Even though Rupert is so much smaller, he’s tough as nails. They match each other in jaw strength and Rupert is perfectly willing to let Radha hit him like a Steeler linebacker and send him rolling.

The next morning, Rupert limped away from his blanket into the living room and jumped–mind you, jumped– into his favorite chair. When I went to see how he was doing, he gave me those eyes and shivered as he held up his right front paw. Let me say I wasn’t entirely buying the act at that point.

Radha, who had dearly missed her buddy the previous night, came rushing over to him, ready initiate their usual bout of early morning chasing. Rupert growled at her and showed her that same paw. Confused, she retreated up into the chair next to him, rested her head on its overstuffed arm, then stared longingly at him. He curled up and ignored her.

After a moment, Radha went to Bear. Bear, having lived so long with the injured Moosie, had figured out that Rupie was hurt. So when Radha suggested that the two of them play, he agreed. Their bout lasted for about a minute and a half before the old man had had enough and laid down. Back she went to her best bud. She put her head on the seat of his chair. He refused to look at her. 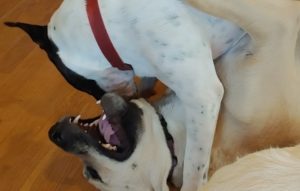 A few minutes later I had to make a trip down to the garden to collect some breakfast greens. Radha and Bear joined me. It wasn’t until I neared the garden gate that I realized Rupert had also joined us. There was no limp or sign of pain as he walked. Radha noticed him a moment later and made that fearsome noise of hers that suggests chasing and running would be more fun than eating chicken poop.  Apparently, it was a very convincing invitation because Rupert took off like a shot. Radha caught him an instant later and sent him rollling. He came up, his mouth wide, showing off his awesome set of very white teeth. And that was the end of his injury. They were off, joyfully chasing, biting, rolling, and growling.

What a con dog! Only then did it occur to me that while he was paralyzed as a puppy he’d probably gotten more attention by shivering and raising that helpless paw than waiting for someone to pet him. Good to know for the future, and very good that it’s true: all’s well that ends well.