And with this title I add to the renown of Princess Bride, the most quoted movie of all time.  (“My name is Inego Montoya…”).  Why am I quoting from a movie released in 1987, you might wonder.

Well, first because it’s a great movie with amazingly quotable lines in it.  The other reason is because my niece Hannah came to visit over her birthday weekend and I discovered a serious flaw in her upbringing.  Despite the fact that her mother’s favorite movie is Princess Bride, Hannah had never seen it.  Neither had the son of my commercial kitchen renter, who also had a birthday this month. For the record, other birthdays this month include my sister-in-law, my renter, two friends and Hannah’s father.  March is the month!

To celebrate the fact that we were all a year older (they happily, me not so much) I bought the movie on Amazon (Amazon has been berry, berry good to me!) and we sat down to watch it on my tiny little iPad. For the record, it’s not often that I miss having a television, but I’m not buying one just to use it once a year. The movie continues to stand the test of time.  I once again lost myself in the doings of Fezzig, Inego, Westley and Buttercup.  The ten-year-old boy loved it.  The fourteen-year-old girl waited until the boy went home and watched it for a second time. When her mother came to reclaim her daughter, I chastised my sister roundly for being remiss in her child’s education.

After my sister and nieces were gone, I started building the new garden.  My neighbors got into the act, too, bringing up an old water tank to use as a planter.  I promised to water it when I water mine.  Al then took his Ranger over to my pullout across the road (yes, that pullout belongs to me and it is not available for school buses or other cars to park in, geez!) and brought back a load of gravel to create drainage in the bottoms of the tanks and my plastic tubs.  The drains and holes were already in place to let the water seep out.  Dirt from my parking area followed.  That sounds sort of iffy except that the area had been a giant compost heap until the ex got frisky and had some scam artist throw down a load of gravel without putting any landscape cloth between the ground and the stones.  Needless to say, it’s nothing but a weed field now.

The roses went in.  On my side there are three pink roses and a Thompson grape, which I hope will crawl across that chain link fence.  Elana also went with roses, a fragrant purple one that is already blooming and a red.  I mulched from the pile of leaves that was created as I cleaned the spring all winter long.  Worms love those leaves, so I know I’ve already inoculated my new planters with plenty of the little earth eaters. 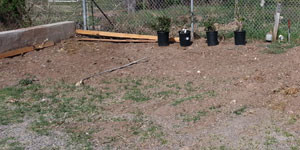 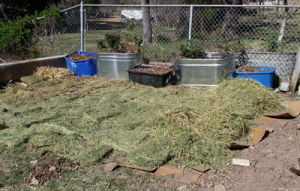 roses in, alfalfa down 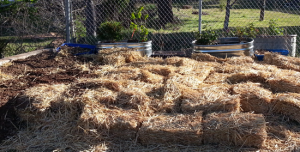 I thought I’d wait until the wind died before laying cardboard only to realize I’d be waiting until June.  Instead, I spread the layer, watering it as I went to make it heavy enough to stay where I put it. The next day I ran to Cottonwood, looking for the guys at Verde Hay. Since the fire, they’ve been hiding out behind Bedrock.  No luck!  I should have called.  I have better results when I pick up the phone and simply schedule a delivery.  But this time I only needed two bales of alfalfa, not worth delivering  And, because I only needed two bales, I decided to stop at the Cornville Mercantile, which is conveniently on my way home from Cottonwood.  Although I don’t know if their alfalfa is GMO–and I suspect they don’t either, since the truckers who haul it don’t usually ask–I don’t like using that alfalfa in a garden.  But this one is intended for flowers, not edibles.  By the way, the fact that I’m building a garden just for flowers had another of my sisters scoffing.  “You?!  Growing something that’s only pretty and not useful?” I believe is what she said.  Okay, so I’ve got a “rep”. Function over form.

It’s not the Frankenfood effect that keeps me away from GMOs, it’s the amount of Roundup that gets sprayed on these crops.  I mean, the whole purpose of creating these man-made seeds is to make chemical companies richer, so it’s no surprise that farmers now spray up to seven times as much Roundup than they used years ago, doing so for all sorts of reasons, the most common being “because they can”.  Adding Roundup to a garden is risky business for the plants just as is adding sewer sludge compost, which even proponents and water-reclamation experts agree may still have chemicals and pharmaceuticals in high enough levels to affect us.  Whaddya gonna do?  Life, it’s a terminal illness.  None of us gets out of it alive.

Anyway, since I’ll only be putting flowers in this garden, I don’t really care about the Roundup levels.  The seeds will sprout if they do, the transplants will make it if they can.  Meanwhile, the garden will be decomposing, the microbes and soil bacteria, protozoa and worms eating their way through the crap, converting it into something safer.  Or, possibly Fungi Perfecti will have finally brought their chemical-consuming mushrooms to market.  I’m on the notification list for that.  They have a mushroom/fungus that is capable of consuming crude oil, turning it into safe compost in one year.  Mushrooms are going to save the world. Or rather, they’ll save humans from the single-minded specialization that’s been going on in Western Science since the end of WWII (to the exclusion of doing good science, I say).  Hello! Holistic is more than a word in the dictionary. It’s the way nature works.

Back at the Cornville Mercantile, the owner had just finished loading a pickup truck with at least a dozen bales of hay.  She looked at my little Focus and asked where she was going to put the bales.  “In the back,” I replied with a grin.  I know I can get exactly two bales into the back of my car. Nothing else along with them, mind you, just two bales.  Home I went with my bales to spread them out over the cardboard.  Then yesterday I borrowed the neighbor’s Ranger and brought up 8 bales of straw from my last delivery.  I was going to add more cubbies to the nesting coop, but it turns out that having the bales lined up along the side of the coop, blocking the view, has brought even more girls into the area to consider the available spots.

By the end of the day yesterday, I’d added my first loads of dirt, only to realize just how long it’s going to take before that large space is ready for planting.  Was I complaining the other day about a lack of exercise?  I’ll be shoveling for at least a week.

But not today.  Today, I’m off to Prescott to take my granddaughter out to lunch for her birthday.  Another March birthday!  Inconthievable!