First, a Bear update.  His toe has healed up very nicely. It never even got infected and he’s feeling great–eyes bright, nose cold. Most importantly, he’s running much more easily.  Well, he runs easily when he wants to, but if I call him to come, he slows to that “You can’t make me move faster” saunter that he saves just for me. He sends his thanks to everyone who wrote with suggestions and good wishes!

Now, onto the event I’ve been expecting since the birth of the first lambs. That’s right. Milly, Mari’s little girl, went for a swim in the ditch. By chance, I just happened to be outside when it happened…strike that. I’ve been on hand for so many of this odd, potentially deadly occurrences that I’ve stopped believing in chance. I’m outside because I needed to be outside at that moment.

So, I was outside by design when it happened.  My little flock of six was up by the front barn. There’s not much grass by the barn, but they use the cement walkway on the bridge to cross to the elderberry/mulberry hillside. There’s good stuff on that hillside. The Johnson grass is sprouting and the mulberries are leafing out. I’m happy to have the sheep graze there as they’ve been doing a good job pruning both the mulberries and the apple trees. They don’t generally bother the elderberries, which look fantastic this year. For a while they thought the artichokes were pretty tasty but have recently begun to ignore them. I figure that the artichoke sap has risen, making the leaves sour, artichokes being a thistle and all. 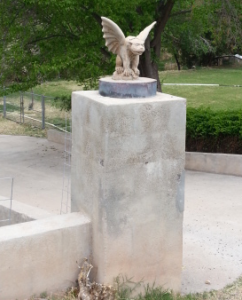 As for me, I was by the house, doing some weed removal from the parking area. Yes, my house has a parking area instead of a garage or a carport. It’s a big gravel expanse that yearly produces the world’s supply of silverleaf nightshade, goathead burrs, and malva (that weed with round leaves and a root that goes straight through the earth to China). Standing between me and the hillside is a short cement wall, which I believe Sam–the previous owner of the house–installed to keep himself from accidentally driving over the edge and into the ditch. This wall curves down along the twisting driveway for the same reason–because of the curves it would be easy to misjudge and there’s a ten foot drop into the water.  Then, because he was Sam, he framed the entrance to the driveway (making it even harder to back down) with a pair of pillars topped with cement gargoyles. “Tremble, all ye who enter here!”

At any rate, from the parking area I watched Tiny and Mari trot over the walkway and onto the hillside. The lambs, who have become very much a mob of four, weren’t paying attention. This has become the norm rather than an aberration. And, as always happens, a few moments later they looked up from their play and panicked. Tiny legs flew as they skittered around the corner of the driveway wall. In their panic they missed the walkway and ended up on the waterwheel platform. 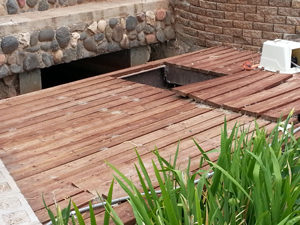 As you can see from the picture, there are no waterwheels as of yet–just a hole where they’ll be installed. And now they can go there! Thank you, Mason Ditch owners for allowing them!  The current is so strong under that bridge that two small undershot wheels, which is what that hole was created for, should produce 40 kilowatts of power daily. I use less than 30 per day (my pump house gobbles up electricity), so I could theoretically be off grid for all but one week out of the year.

Rose and Petunia, younger but bigger lambs, led the way. They easily leapt over the spring cleanout pipe and onto the hillside. Milly  and her brother followed. Where her brother managed the leap, she slid off the pipe and back onto the wooden platform.

From where I stood I could see she intended to try again, and I was just as certain that this wasn’t going to end the way she expected. I dropped my hoe and started down. Sure enough, this time she hit the top of the pipe and slid down directly into the opening beneath it. Bleating in panic, she managed to keep her front legs on the platform, trying to hoist herself back up. She held herself there for a terrified instant or two, which was long enough for me to get beyond the huge patch of water irises, throw off my shoes and slide down the ditch bank toward the water.

Meanwhile, up on the hillside, Mari is grazing calmly while Tiny, Milly’s grandmother, turns and begins to call for Milly to try harder. Huh? I guess Mari is willing to defer to her mother in all things.

Milly and I hit the water at almost the same time. I hear, “Blabublbb-BAA!” as she goes under, then manages to rise above the surface. I realize that she’s holding herself under the platform by treading like crazy. In her panic, she’s fixated on getting back up through that hole.

As I call, “Baby, baby, baby!” to let Milly know I’m coming for her, Mari finally notices that her daughter’s in trouble. She and Tiny start for the walkway, while the hooligans that got Milly into this situation come bounding and bouncing after them.

I hear that watery bleat as Milly again goes under the surface. She’s still holding herself under the platform despite that current. This seriously worries me. The last thing I want is to duck under that thing to get her. I have seen wolf spiders as big as my hand on that platform and I’m not really keen on finding myself eye to eye with one of those big girls. Just then, Milly catches a glimpse of her kin on their way, and makes a 180. Still sheep-paddling, she lets the current carry her out from under the platform.

Now, Milly is the shyest of my four lambikins, and she doesn’t much like me getting close to her. But as I call “Baby, baby, baby,” again, her eyes lock on mine and she’s swimming as fast for me as I’m shoving through the water to get to her. She had no trouble letting me scoop her up to bring her back up the ditch bank.

An hour later she was dry and very clean, the whole event seemingly long forgotten. And with that, peace again descended onto the farm. Whew.

One Response to Into the Drink