I know this will be hard to believe, but the impossible has happened. I have run out of baling twine to use for my building projects.

Oh, the horror! What can I say? Every animal I own is grazing on pasture at the moment, so I’m not buying any hay. That may change in the near future as I’m expecting two new animals who have only been fed alfalfa and aren’t used to grazing. Of course, I’m hoping to wean them off the bales and onto grass, but only once my baling twine supply has been replenished.

I wouldn’t have noticed this crucial dearth if not for my truant teen-aged chickens. By Wednesday of last week I knew I couldn’t keep them in the orchard any longer. Every chance they got they were escaping from their tractor to return to the Garden of Eatin’. That meant moving them down to the turkey barn, and moving them down there meant I needed to build them an isolation coop.

I know I’ve said this before, but chickens are little Tyrannosaurs. They have no compunction regarding murder. If they don’t like another chicken, they attack first and worry about whatever consequences might follow later. Once, long ago before I was wise to the way of Gallus gallus domesticus, I brought home twenty-odd chickens of all different breeds. Although there were supposed to be two of each breed, I ended up with only one Turken. The Turken is an especially ugly breed, meant to look like a turkey while still being a chicken. She had a naked neck and what seemed to be a bowl cut to the feathers on her head. Needless to say none of the other chickens tolerated her because of her strange looks. One day, they ganged up on her and tore out all her feathers, resulting in me having to end her life. Her death took with it any remaining delusions I may have had about gentle chickens.

The point of all that is that I know how important it is to separate chickens until they’re used to each other, which generally takes a week. Of course, this time I’m combining Barred Rocks with more Barred Rocks, and with Partridge Rocks that are accustomed to Barred Rocks. It should be easier. Or maybe not.

Either way, doing that in the turkey barn required erecting a wall of some sort, and here I was, without so much as a strand of baling twine to my name.

Down at the barn, I found a chain link panel that had once been a part of a dog kennel. It even had a doorway…but where was the door? I found it tied to a post in the coop, holding up one end of a length of well piping. Scratching my head in confusion, I walked to the opposite end of the well pipe, which was outside the coop wall. It was tied to the metal door frame of my birthing stall. That meant it was doing exactly nothing except taking up space. For the life of me, I couldn’t remember why that pipe was there or what had convinced me to use a chain link door to support it. No matter. It had to come down. However, when I started to remove it, Christina, who had volunteered to help erect this simple wall, argued against it. It was 108 degrees and humid, and this wall was supposed to be a “ten minute job.”

For the record, there’s no such thing as a ten minute job.

Addled by the heat, I conceded. So we tied the interior end of the pipe–that will come down one day soon–to a convenient post and confiscated the door. The ten-foot-long panel came in through the barn doors, through the broken interior door that once kept roosting birds separate from standing cows, and up onto the metal platform built to hold tractor implements. We aligned it against the posts. It was about four feet short of the opposite wall, the wall that holds up the hay loft. One handy panel later, we had what we needed. The door sort of worked, although it was too close to the post and the compost heap to really swing open. Still, it was good enough.

Now all we had to do was make sure it stayed where we wanted it. I brought out the bucket that contains my fencing tools. I’ve learned a lot about fencing over these last five years. You can cut anything with bolt cutters, but you need tiny electrical wire cutters if you really want your fence wired tight to your posts. My bucket also contains a socket wrench with the right head for installing the butterfly clamps used on chain link and post fences. But what was that? Why, it was a massive bag of zip ties! I forgot I’d bought those for the PVC rabbit tractor. They might not be baling twine, but they’d do.

Armed with the right tools, I climbed up into the very hot hay loft with a roll of plastic chicken wire to prevent aerial invasions while Christina took another length of the same stuff and began to line the handy panel to prevent walk-throughs. After a few minutes of quiet work, I heard her say, “What are you looking at?” I looked down from my perch some nine feet over her head. 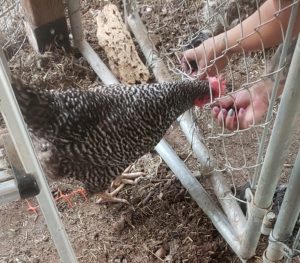 I looked down from my perch some nine feet over her head. One of the Barred Rock hens was watching intently from the other side of the wall as Christina pushed a zip tie through the chicken wire. The hen cocked her head one way, then the other, then back again. Her beak was only inches from Christina’s fingers. When that zip tie was in place, the chicken moved with Christina to the next spot, still studying the movements of Christina’s hands. Then the chicken brought her beak through the fence and tapped at Christina’s glitter-speckled painted fingernails and we both laughed.

About two hours into our ten minute job, we had what we thought was enough chicken wire, zip ties, handy panels and chain link to keep the teenagers locked into their new area, one complete with its own compost heap. Off we went to fetch a couple of cat carriers and bring them back to their new home.

That should have been our first clue–the fact that we could get twenty-odd birds into two cat carriers. Sure enough, as we opened the carriers to let them run, they scattered around the space, two of them exiting through the chain link and into the back pasture. Where one of the Partridge Rocks immediately raced after them and pecked them both on the head.

I was too hot to face another fifty zip ties. There’s a reason I like baling twine; it’s so much easier on the fingers. Instead, I fetched the bird netting. I hate that stuff, but so do birds, javelinas, dogs, cats, deer, cows, sheep, snakes, and any other animal that has the misfortune to get tangled in it. Get one square caught on your button, and you’ll spend an hour cursing as you try to remove it while it tangles in your fingers, your hair, your shoes.

As I put the netting in place, the chicks began exploring their new home. In about three minutes most of them were scratching in the compost heap, chirping happily. The others had gone to the rafter wall where there is a deep layer of leaves and dirt. Yep, this was going to work.

Then, at dawn the next day I discovered that they could also still get through the chain link on the opposite side of their space. No big deal. All I needed was another roll of plastic chicken wire, a hundred or so zip ties and ten minutes.