You know how some people are shoe fanatics, or have shelves full of bobble-heads, or collect those theme plates? Well, I’ve decided I’m an animal-aholic. It’s for this reason that I stay away from the “Farm and Garden” section of Craigslist.

I made a little slip last week. I was remembering the taste of homemade cheese and bemoaning the fact that I have to buy butter these days. I thought, why not? I’ll just look. Right. 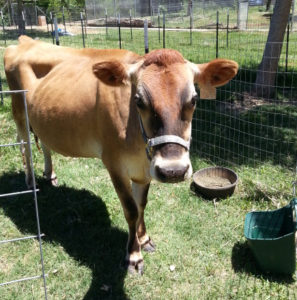 The ad promised a four-year-old Jersey girl exposed to a Holstein-Jersey bull. (Or maybe an Angus, but I’m hoping for spots.) Sweet-natured, good with kids, dry at the moment. I stared at her picture. Everything about her was right, her size, that Jersey face complete with the carefully drawn black eyebrows. Even her name was right. How could I ever forget that I’d bought June in June? As for the price, well it was better than right. It was PERFECT!

I couldn’t stop myself. I had to have that cow. So Friday June came home. Many thanks to Jim and Sharon for their help!

With June due in September I have three months to get used to the idea of milking daily again. I figured this would also give her time to get used to being pastured and eating grass rather than standing in a corral with only alfalfa. This is the third cow I’ve purchased who has spent no time on grass. It’s always interesting to watch them work out that the weird stuff under their feet is edible. June has made a point of trying everything, including spearmint and the water grass in the pond. She seems drawn to Silverleaf Nightshade. Luckily, it’s not in its poisonous stage just now and I recall that my cow Brighty also enjoyed it at about this time in her pregnancy. Hmm, I wonder what it has in it that they want?

Most importantly, I figured she and I would use the summer months getting acquainted. Silly me.

Boy, is she! I’m betting June was someone’s bottle-fed baby, or perhaps a 4H project. She’s very, very bonded to humans. Well, human women. Not so much human men.

This is good and bad. It means she’s easy for me to handle because she wants to please me. It also gives her the freedom to be interested in everything, because she utterly trusts that she’s safe because she has a human. The downside? Every time I walk away from her, I have a 1000 pound dog on my heels. And every time I close the gate on her, I see it in her eyes. She tells me she’d be just fine living on the porch with the dogs. When I don’t agree, she bellows for me. She bellowed from the moment I put her in the pasture Friday until well into Sunday afternoon. Just as an aside, the Foley guy for Jurassic Park used a cow bellow for the sound of the Tyrannosaur. I’m sure my neighbors were thrilled.

Okay, part of her noise was loneliness. She had a half-grown Angus bull as a buddy on her previous farm. All she has here are two dogs, one of whom made certain June knew he was her new favorite babysitter, and six snobby sheep, who don’t mingle with animals that aren’t their kind. June was completely unimpressed with the dogs, but, having been with goats, did her best to introduce herself to the sheep. They weren’t receptive. Instead, each time she got close enough to offer her nose the way we offer each other our hands, my little flock would scatter. I stepped in and have been penning the sheep into the pasture alley next to June at night, hoping that familiarity didn’t breed contempt. It may be working. Today, Mari  and her little ones ran right next to June as they made their escape rather than hopping frantically in a wide arc around her.

Oddly, or maybe not, Tom has made a point of welcoming her, walking circles around his newest and largest hen with his tail fanned and his chest puffed out, informing her she’s now part of his extended flock. Unfortunately for Tom, June isn’t keyed into birds. Worse, my new chickens have never seen cow pie. I might have to teach them how to scratch through it. I need my little rototillers!

Listening to June all weekend almost sent me back to Craigslist to see if there’s another perfect Jersey girl meant to be June’s friend. I resisted with all my might. I’ve got piglets coming in three weeks and in only three months June will produce her own new best friend. As of today I’m not only hoping for a spotty little heifer but that June doesn’t teach her baby to talk.