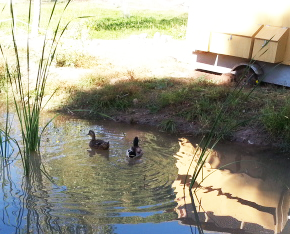 It finally happened.  I got the ducks I’ve been wanting forever.  I was ready for them.  Last winter, my neighbor was moving dirt and needed to find a place for the excess.  I had his guys half-fill my dry pond.  It was dry because although it was lined with bentonite clay, which should have dried into a waterproof layer, it leaked like a sieve. Moreover, I had no way to aerate the water, at least not without buying new pumps, putting in electric and figuring out how to hide a gigantic filter box.  So the pond went from round to kidney bean-shaped, which buried most of the cattails, mint, horsetail ferns and the other water-happy plants I’d originally planted at its edge.

When the guy driving the skidsteer came back with his last load I had him move the little yellow chicken coop onto the mini-pennisula that he’d created.  Oops.  No good deed goes unpunished.  His skidsteer (man, I want one of those to play with!) sank deep into the soft, dry clay that he’d just moved into the pond.  He had to go get the backhoe and dig out the smaller machine.

All through the spring and summer the pond waited.  I started filling it from the spring overflow so the oxygen-depleted water was replaced every so often.  Much to my surprise, the plants began to come back and three little Cottonwood seedlings appeared.  And it no longer emptied within hours of taking on water.  Instead, it now leaks more like a cracked pipe, the water slipping away very slowly, seeming to be soaking in rather than spreading out over the pasture.  Even better, it no longer empties completely, stopping instead at about mid-human-calf level.  That’s enough water that critters began to show up.  Toads, crayfish from the Mason ditch, dragonflies and darning needles.  There was a bullfrog for a while early this summer, its deep bass bellow filling the night air.

Moosie really enjoys raw frog. ‘Nuf said.  If only that dog would learn to differentiate between toads and frogs. All I can say is that the toads now come out of his mouth almost as fast as they go in.

Last spring a pair of wood ducks stopped by to survey the area.  I was thrilled and begged them to stay, but the dogs were too much for them.  Then, about four weeks ago my friend Su called.  She also has a pond (much bigger and less leaky) and had populated it with a flock of ducks descended from a beloved pet drake.  But then her dog (a Great Pyr with a penchant for skunks and waterfowl), a few owls, a few raccoons and a few skunks happened.  She brought me her last three, a mated pair and a young drake. She told me they were meat ducks.  I looked them up and think they might be Welsh Harlequin ducks.  They sort of look like Mallards, which are also meat ducks when it comes right down to it.

So I raised bird netting around the pond and we put the ducks inside their new duck house for 24 hours.  I was hoping they’d imprint on it as home, especially since the fast-moving Mason Ditch is just on the other side of the levy from my pond.  It went well for two days.  The three ducks swam as if unperturbed by the watching pigs, sheep, turkeys and chickens, all of whom were fascinated by this new addition to our little farm.  Then on the third night when I went to put them away I found the lone drake had disappeared.  Just in case he’d flown over the netting, I clipped the wings of the other two.

Meanwhile, as the ducks were getting settled in, the turkeys and sheep were doing their best to bring down the knitted fencing between them and the pond they enjoyed. While the turkeys flew over and only needed to be chased out, the sheep kept trying to go through the netting.  How in the world can one ewe get her head through three different sets of squares in that netting, especially since Tiny’s noggin is bigger than the squares?  I mean, she really has to work at it.  The third time I freed her from the potentially deadly netting, I took it down. So far this has resulted in no turkeys or sheep in the pond and no ducks in the ditch.

That doesn’t mean that something new didn’t move into the ducks’ area.  Bear’s favorite cat, the orange tabby, has made himself at home in the duck house.  And why not?  It’s the perfect cat retreat, the interior cozy and warm during the day, nesting boxes filled with fresh straw.  What could be more perfect for a cat’s midday snooze?

I can tell when Goldilocks is in there.  The ducks stand outside the ramp to their door, their heads raising and lowering as they peer inside to watch the strange and potentially dangerous creature who is sleeping in their bed.

If only they knew.  That cat is bird-proof.  The turkey hens have made it their mission to train all my felines.  One step too close and they spread their wings and race at the cats, screeching as they come. One flap from either duck and that cat would be fleeing for his life, even if he had to swim across the pond to make his escape.