I was very concerned about what might happen to my llama Kali after he lost Scout. After all, the two llamas had been together their whole lives, or so I was told by my friend Su, who owned Scout and Kali before me. Their original owners got them as little llamas, which are called crias (I had to look that up), and raised them to be pack animals for camping trips. Let me say that, having grown up spending most summer weekends camping with my family in the wilds of Colorado, I can see the attraction of having a critter to carry all that stuff.

What concerned me most is that Kali had not seen Scout die or be buried. How would he handle Scout simply disappearing? I’ve seen all sorts of animal grief. Elsie stood on the grave of her herdmates and called for them for 3 days. The pig Lonely Girl squealed and cried for a full day after realizing she was all alone. Mari, my second oldest ewe, watched as her son was shot, then returned to grazing. It wasn’t much, but hey, she’s a sheep. I’m surprised she even recognized he was her son. Even turkeys grieve. Tom knows exactly what’s happening as I take his flock up to the barn in the week before Thanksgiving. When I’m done, he’ll lead the remaining members of the flock up to what remains for a last glimpse.

So, with no idea what to expect from a llama, I kept an eye on Kali that first morning. He spent most of it wandering the back of the property. I sent the sheep back there, in case he was lonely. By mid-afternoon, Kali had left the back pasture and walked directly into the middle pasture. It was the first time he’d crossed that boundary. He explored the fence line, nibbled a few leaves from a cottonwood, checked out the chicken tractor where the Red Rangers are living now, then began to walk along the fence that separated him from the next pasture, where the rabbits are.

I went down to check on him. Much to my surprise, he made his way toward me. While Scout lived, Kali kept his distance, sidling away if I got close. This time, as he drew nearer he met my gaze. He stopped a few feet from me. I reached out. He backed away, but not as far as he had done in the past. I walked passed him to open the gate to the front pasture, and left it open behind me, just to see what he’d do. 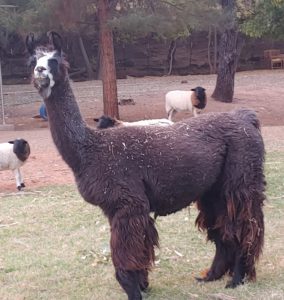 He was through the gate in a flash, then headed straight toward the gate that leads to orchard and garden. Yikes! I trotted after him, wondering how I was going to get him back inside the pastures. I do have a lead and a halter, but I was going to have to catch him to put those on him. Those long legs of his meant I was talking two steps to every one of his.

He was out of the pasture and into the orchard in no time, then headed for the barn. I’d almost caught up when he reached the steep concrete driveway that leads up to the house. Just when I thought all was lost, he stopped. I realized he’d just caught sight of the men working on the deck. Apparently, that was more people than he wanted to confront, because he turned around and loped past me in that strange camel-like stride of his as he returned to the safety of the more familiar pastures.

Since then, he continues to become more friendly. He’ll take food from my palm now. He loves rabbit food, which is mostly alfalfa, and chicken food, which is very tasty but really bad for him. He has also discovered that he loves pole beans. I let him stay in the front pasture without thinking about how tall he is. Before I realized it, he’d s eaten all the scarlet runners and Aztec long beans down to the top of the stretch of 8 foot fence that separates my pasture from the orchard. And then had the same reaction that most people have when they eat too many beans. I’m keeping him out of that pasture now, at least until all the beans are down.

But the strangest change has been how he now leaves his droppings. Llamas choose one spot to leave their pellets. But in his new freedom, Kali seems to have decided that he doesn’t want to be confined to just one spot. Instead, he’s created a potty space in each pasture. And bless him, if he didn’t choose the exact right spot for each one–the place where the ground most needed some fertilization.

So, much to my joy, Kali is doing just fine without Scout. If this is llama grief, then I approve.