The turkey came home to roost for Radha today and she most definitely earned it.

As you may recall, I’ve been battling for months to get my hard-headed, dominant and determined, 1.5 year old Anatolian Shepherd to show me she can become some sort of livestock guardian dog (otherwise referred to as an LGD). Over the last six weeks, I’ve watched in relief as, little by little, Radha finally seems to be getting an inkling. It’s just so hard for her because everything that an LGD does is nothing that Radha likes doing. LGDs sit and watch. Radha wants to run and play. Actually, she wants something else to run so she can chase them.

I blame Mr. Headbutts for Radha’s behavior. He confused her. But who knew a ram lamb would make a best friend out of a dog that he should instinctively view as a potential predator? It’s important to note that their play was anything but gentle. It included both biting and some serious head butting. But because of him, Radha thinks of all the creatures on the farm as potential playmates. For good reason, none of the other critters living here are willing to step up to be her friend. The problem is that when she approaches any of the other critters, they all run from her in fear and Radha reacts like the predator she is.

It’s taken months of work on my part to get her to agree that only bad dogs kill birds. That’s when she launched her “catch and release” program. Rather than kill the bird, she caught the poor thing by the back end, held it for a moment–sometimes doing damage and other times doing no more than dampening feathers– then let it go. I girded my loins and once again started training. It was after I saw her catch and release Tom, my old and incredibly gentle tom turkey, that I found the answer. From then on every time I caught her chasing a bird, she found herself collared to a very heavy chain that was fastened around a post in the back barn. There she stayed, right in the middle of all the chickens, chained in place for an hour, far from her house, her people and Rupert.

At first, she resisted. She’s an escape artist, that one. Like Moosie, if she doesn’t want to be someplace, there’s no way to keep her there. But this time, nothing she tried worked, not even tearing up the fence that hangs on that post. It took six “time-outs” before she gave in and agreed to ignore all birds except those big ones that fly over the property. For the last four weeks, she had controlled herself very well, sometimes even looking at me as if to say, “See! I’m not chasing!”

Okay, it may not have been just my “training” that changed her. Something happened to Radha the day the llamas arrived. While she was fascinated with Kali, the brown llama, she was instantly drawn to Scout, the blind, gray-and-white llama. She immediately understood just how fragile he was and began guarding him within minutes of meeting him. Every dawn, she follows me to the back of the property to greet her friend Scout, her tail wagging happily. Let me say here that Scout is a whole lot less impressed with Radha. More than anything, he wishes she’d leave him alone and does everything, including kicking her, to try to drive her away. But Radha remains undaunted and always settles down into LGD watch mode whenever she’s near him.

Four weeks of good behavior on her part has not been long enough for those creatures she once tormented to have either forgiven or forgotten. Especially Tom. And since Tom attacked that Golden Eagle a few months ago, the old man has his mojo back. He’s done taking any you-know-what from a snot-nosed puppy who’s only lived here on the farm for the blink of an eye.

It can’t have been easy for gentle Tom to have gotten to this stage. After all, to the best of my knowledge that bird has never attacked any human, pig, cow, dog, cat, or sheep on the farm. He ignores the chickens and could care less about the ducks. Not even the new turkey hens have caught his eye, although he does police the four young toms, whom he seems to consider hooligans.  But while they are already beating themselves bloody (I have another 2 months of this before Thanksgiving!), he hasn’t laid a talon or beak on them. 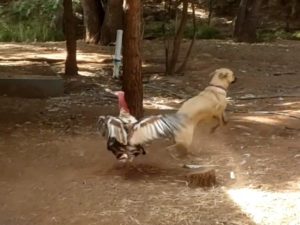 A few weeks back Tom started following Radha whenever she came to the back pasture, making that odd, high-pitched sound that Toms make when they’re threatening each other. At first Radha didn’t notice him, but when he persisted, she started to get a little creeped out. Every time he’d come at her, she slink away, glancing back over her shoulder in worry. Last week Tom was relentless as he chased her and she finally understood he meant to hurt her. That had her dodging him and hurrying to exit from the pasture.

Today, he got her. She ran like a coward. Yes, payback, like karma, is a female dog and her name is Radha.