Before I throw myself into this week’s post, I have to kvetch over the recent full moon. I know everyone was going on about it being this blue-blood-full-eclipse moon, but why didn’t someone warn me what that meant? Here I was, figuring this was a full moon like all the other full moons I suffer through, what with the coyotes showing up and Bear barking all night.

This was not that sort of moon. The insomnia started the night before the official full moon. That night I woke up about every hour to listen to Bear as he commented on everything. I figured that was no big deal. I’d be exhausted for the next night and sleep through.

Not. Somewhere around mid-afternoon, a switch flicked inside me and the electricity started to flow. I didn’t bother getting into bed until after 10:00 PM. Sleep wasn’t just elusive, it simply didn’t exist. I lay there, listening to Bear barking. Somewhere around 4 AM I started having weirdly funny psychedelic hallucinations. The amusement made up for the sleeplessness. Dawn came, I got up and did a full day’s work, still waiting for that switch to shift from “on” to “off,” which it finally did around 7 PM.

Whew. Thank heavens, I’ll be dead and buried before another of those moons shows up again.

Because I don’t have pigs these days, nothing funny happens around here unless Peanut falls off a bridge. Since he didn’t do that this week, I thought I’d share my newly-honed recipe for Lamb Soup/Stew. The difference between the two is if I want stew, I dredge the lamb chunks in flour and brown them before throwing them into the crock pot. Today I made soup because I was lazy.

I grew up in a family where our meals had little variation. Part of that was my father’s ulcer, which, it now turns out, had nothing to do with the food he was eating or the stress he was under. The rest of it is that my mother was an uninspired cook. Lamb never once appeared on our table, turkey showed up only for Thanksgiving, fish came in the guise of fish sticks, my mother’s sardine-and-peanut butter sandwiches, and my father’s pickled herring. We ate chicken (baked, never fried), ground beef as hamburgers or the dreaded hot dish–a dish that combines ground beef, tomatoes and a bag of frozen mixed vegetables. There was an occasional roast.

My first experience with lamb was at a restaurant, where I tried lamb chops with mint jelly. Tasty, but then I discovered Gyros and Shawarma, which I liked even better. Then, probably fifteen years ago, I bought a lamb from a local rancher who raised sheep and fell in love. How had I lived so long without eating leg of lamb, or lamb shoulder chops? 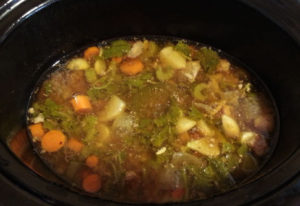 That’s what spurred me into raising sheep–I wanted my own lamb meat–and when I got it, the roof blew off my expectations of what lamb was supposed to taste like. I was about halfway through packaging that first carcass when I realized I’d forgotten to take something out for dinner. I grabbed a good-sized handful of meat scraps and threw them into my trusty crock pot with nothing but water and salt. I figured I’d finish up the soup on the stove after I was done.

By the time I was cleaning up the kitchen the amazing rich smell of grass-fed lamb had filled the whole house. I fished out a chunk of meat from the crock pot, stuck it in my mouth (and burned my tongue), and nearly collapsed, the taste was so amazing. That night, I ate lamb cooked in nothing but water directly from the crock pot and thought I was in heaven.

With each successive batch I’ve gotten a little more creative and the taste just gets better. I finally have a recipe worth sharing.

Just before bedtime, put the lamb in the crock pot. (If you want stew, dredge the lamb in a flour mix–flour, salt, pepper, powdered onion, powdered garlic–and saute in lamb fat or lard or olive oil before putting it in the crock pot.) Add broth, water, onion, bay leaf, sea salt, and peppercorns, set the pot on “low” and go to bed. Add more water in the morning if necessary, then add the remaining ingredients. Cook on low until it smells so good you can’t resist and have to have a bowl (usually around 4 hours.) Eat it all before anyone else has a chance at it.