That’s what happened on the farm yesterday morning.  Creatures were moving at the speed of “lickety-split”. Let me step back and set the scene for you. 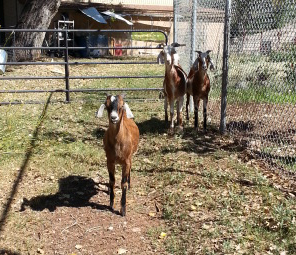 For the past months I’ve been urging my friend Su, the goat whisperer, to bring a few goats over here.  Or maybe some of her alpacas. My pastures are way overgrown because I don’t have enough animals grazing and what’s growing out there just needs to be eaten down.  She finally agreed and brought over three of her goats, two wethers (castrated males) and a young buck.

I have never wanted goats. They’re voracious eaters and they’ll eat everything, and are even more destructive than sheep.  But with my alleyways and their new handy panel gates (see last week’s post) I knew I could keep her boys contained if need be.

Much to my surprise, her goats are very well behaved, being imprinted on humans rather than goats. They’re also a little overwhelmed by the size of the area they’ve now got to graze. And they’re quiet.  They make these tiny little “maa’s”, almost too low to hear, especially for someone accustomed to listening to Cinco’s deep bass “blaaat” and Tiny’s annoying and never ending contralto “baa”.

Things got off to a rocky start.  As we led them down to their alley way, Moosie followed.  Everything about his demeanor suggested he was thinking they might be prey animals.  I very carefully pointed to each goat and told Moosie that it was “mine”.  Twenty-four hours later, after the newness wore off, he recognized that they were four-leggeds.  To Moosie anything with four legs and about his size is a potential dog, and a dog is a potential playmate. Let me just say that the goats were, and still are, very leery about this change of designation.  They’ve added Bear to their leery list, just in case he decides to act like Moosie.

The piggy girls were equally as fascinated by these newcomers and they swiftly discovered that the goats were terrified of them.  This resulted in each big girl–they’ve reached about 250 pounds now–racing along the alley fence to make the goats inside run.  I swear I could see them all giggle as they did it. The goats are still giving the pigs a really wide berth.

My hope was that the goats would become comfortable with Cinco and Peanut. I’d like to create a flock of boys so I can keep my two rams away from my ewes without them feeling isolated. I’m afraid that will make Cinco even more aggressive than he already is. For that reason I put the goats in the alleyway between the rams and the ewes. This was acceptable to the goats, because those sheep almost look like goats, don’t they? There has been a lot of nose-to-nose communication through the fence.

The first day I allowed the goats out of their alley to graze I kept the rams in my neighbors’ pasture, just in case.  These slender, graceful creatures with their legs covered in multi-colored stockings quickly gravitated to Tiny, Mari and the lambs, following the girls as they explored their new space. I kept their alley gate open just in case and, indeed, they high-tailed (literally) it back inside the minute they saw the pigs coming their way.

Still uncertain what might happen if I put two rams and a buck together, I waited until Sunday morning before orchestrating their meeting. As always, Peanut treated them the way he does every other animal on the farm–as if they were his best friends. Or rather he tried to.  He couldn’t catch them to introduce himself because Cinco was intent on running down those caprine boys and licking their fur.  Not their faces or the other end, but right in the middle of their bodies. The wool flew as he ran from one to the other, his tongue moving.  None of the goats acted frightened, only like this behavior was just too weird to be allowed. They outdanced him each time he got close until he finally gave up.

I have to say I agree with the goats.  That was just plain odd. Then again, odd is what happens around here.

A final note.  It appears that little Mari is healing. This morning when she came to her feet she extended her injured leg out behind her, pointed her hoof, and stretched.  Yay!