A couple of weeks ago I was having lunch with my friend Su. Su and I have known each other about nine years now, having met while exhibiting at a local craft fair. She was selling Norwex. I was subtly introducing raw milk to my community by selling lemon curd and my jalapeno jelly. The organizer of the fair mistook me for Su because as I introduced myself to her, I mentioned something about being allergic to perfumes. Apparently, Su had reserved a spot far from another merchant who was selling scented soaps. Su arrived as I was being led to my “reserved” spot, which was actually hers. When I realized we had similar allergies, I decided we ought to at least get to know each other.  As it turned out, we had a lot more than allergies in common–things like hand milking, cheese making, a love for rural life, and a similar upbringing. So over the past years, we’ve bounced in and out of each other’s lives just when we most needed the other. A few weeks ago it was my turn to be the one doing the helping. Years ago, Su and her husband purchased a flock of Alpacas, which came with a pair of livestock guardian llamas. Or rather, one guardian and the guardian’s friend, a blind llama. The other day at lunch Su mentioned that she wanted to re-home the llamas and had offered them free on Craig’s List.

I instantly sat straight up in my chair. “Really? You’d give them away for free?”

Remember, I know there’s a hunting lion in our neighborhood. And Su keeps her flock and llamas about a mile and a half from my home. And I’ve got these deficit dogs–one elderly, one a useless pet, and one so hard-headed I can’t be sure what she’s going to do from minute to minute. The idea of having a REAL guardian that might actually protect my sheep from a lion was, well, incredibly alluring despite that these llamas are working their way toward elderly. 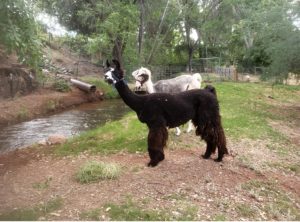 A moment later, we’d agreed that her old boys would come live with me. It took a bit to get them here. There was a thick layer of gravel on a driveway to be negotiated, as well as getting Scout, the blind boy, into the trailer, and convincing Kali (yes, the working llama has the same name as my former dog; that, in itself, was pretty weird) to follow Scout into the trailer.

The stars aligned a little more than a week ago. Scout allowed us to halter him, and we got him into the horse trailer with next to no trouble. Kali followed without incident, and Su’s friend’s truck made it up the driveway without floundering in the thick gravel. Once here on the farm, we walked the two camelids across the orchard and into the front pasture, then into the alleyways I’d set aside for them. I wanted to give them a week in a confined space, apart from the sheep and the dogs, to get accustomed to their new home.

It was a good idea, but I didn’t quite get how completely disabled Scout is. The poor thing. He kept running into the fencing. Although I put up a shelter for them, where I kept their food and water, it seemed to me that Scout wasn’t spending enough time in that area. I hated seeing him sitting in the hot sun at midday. Unlike Kali, each time I led Scout back to the shelter, he refused to stay there for long and would go back to again bouncing off the fences.

In the meantime, the dogs were doing their best to figure out who these strange creatures were. Su had warned me that neither llama liked dogs and that both were likely to kick if approached. Bear was the first to introduce himself. Scout sniffed at him, then went back to rebounding along the alleyway. Kali and my big boy communed, nose-to-nose, for a long moment, then Bear laid down next to Kali and Kali ignored him.

So much for disliking that dog.

Rupert introduced himself next and very quickly decided that he had no business anywhere near those two creatures. The llamas have been here for a couple of weeks and he continues to maintain a very wide distance.

Then there’s Radha. First, she tried  chasing the llamas. Neither one ran. Then she tried to encourage them to play with her. She succeeded in getting Scout to kick at her while Kali figured out that she was all bluff and ignored her.

Meanwhile, Scout continued to bounce off the fences. A couple of days ago I couldn’t take it any more. Ready or not, he needed a larger space, one where he would always be able to find to water and there was enough grass for him to try grazing. He needed to be in the back pasture. All I had to do was get him there without upsetting Kali.

At first, it looked as if this task was going to be as easy as getting them here. With a lead fastened to Scout’s halter, Christina and I dragged, pulled, coaxed and encouraged him across the middle pasture. By the time we reached the grassy swath in front of the turkey barn we were a procession of humans, llamas, chickens, turkeys and dogs. When I finally had Scout in the back pasture, I led him toward the ditch so he could smell the water. That’s when he caught his back foot on something and fell. He landed with one back leg splayed to the side while the other was beneath him.

I had no idea that llamas cried like babies when they’re hurt. It was horrible to hear, and frightening to watch. What if he’d broken a leg? How was I ever going to explain this to Su?

Christina instinctively raced forward, wanting to help. At the same time, I shouted at her to get away. That’s because I could see what she hadn’t, that Kali is racing full tilt at us. She barely managed to flee before Kali reached Scout, kicking and spitting.  He then stood over Scout, his front feet straddling his friend. My jaw dropped. So this is what a livestock guardian looks like. In that instant I had no doubt that Kali would do the same for the sheep or any other critter that was threatened in his vicinity.

Bristling, Kali looked from me to Christina to the three, or rather two watching dogs. By then, Bear had gone to lay down. He was paying no attention to the dramatics going on a few yards behind him. 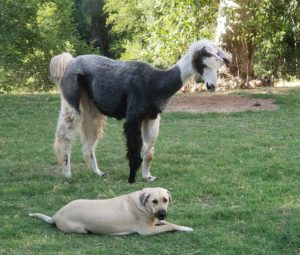 Rupert cowered. Not Radha. She came slowly toward Scout, paying no attention to Kali’s warbled threats, and put her nose against his. At this point I was sure that my replacement livestock guardian dog was about to be attacked and possibly killed. The only thing Radha had going for her is that she’s wicked fast. More importantly, I doubted that Kali would leave Scout to catch her.

But even as Radha, still sniffing at Scout, came closer to where Kali stood, Kali didn’t move. When Radha was finished sniffing, she strolled past Kali, then went to lay down in front of Scout. Every line of her body said she understood he was hurt and meant to protect him.

Apparently Kali reads body language as well as I do. A moment later he backed off and Scout came trembling to his feet. That’s when I made my decision. I won’t be leading Scout anywhere again. He’s where I want him and he’ll have to find his own way from now on.

Radha stayed close to Scout until I finally called her away. That evening she went down to the pasture and once again approached Scout. He again allowed her sniff at him and, as she’d done earlier in the day, she laid down near him.

And thus is the livestock guardian dog gene triggered. Scout is hers. Even Kali accepts that.

As for the sheep that I intended Kali to guard? Christina’s mother did some research and reports that llamas seem to think of sheep as their intellectually challenged cousins. So far, that seems to be Kali’s attitude toward them. What does my little flock think of the newcomers? That it’s swell of these guys to share their leftover hay.

I’m happy to report that today I not only saw Scout make his way across the pasture to water, which relieved me to no end, but I watched him graze. As for Kali, this evening he once again turned to face the road in the direction of his former home and hummed. I can see him longing to return to the alpacas he once guarded. I wish I could tell him that it’s okay, that his former flock is fine, and, more importantly, how much I appreciate what he’s already done for me and the farm.