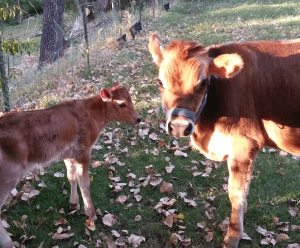 So here’s little Georgie, our mother-less calf, reluctantly adopted by Elsie when she realized that all the other cows were dead.  I watched him today as Hannah was coming into the world, wondering if Elsie would drive him away or ignore him once she had her own “child”.  Silly me.

Yes, Elsie did gently nudge him aside at first while she worked diligently on cleaning her baby, then getting Hannah up and walking.  George did what he usually does when he’s one his own–pillage the barn because he’s figured out how to open the barn door, chase the cat up the tree and consider if it’s possible for him to climb as well.  Annoy the chickens because he can.  Then he drifted back to Elsie in Al’s and Elana’s field.  By now, Elsie had delivered her afterbirth–this was about the most “textbook” a delivery as I could have imagined–and Hannah had started bounded on her stiff little legs.

As she saw George, she got up and tottered over to him.  George carefully lowered his nose to touch hers.  Then, as I watched, he gently pressed his forehead to hers and rubbed it against hers.  It was the most amazing thing I’d ever seen, full of love and acceptance and genuine caring.  Without a word he said, “Hey little sister, welcome to the world and I’m glad you’re part of my herd.”