As usual you need to catch up before I can move forward. I swear, it’s no longer life in the slow lane out here on the farm. Nowadays, the days whip by so fast my head spins. 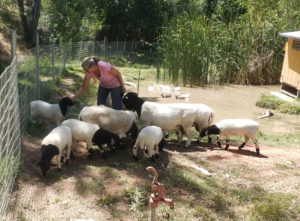 Mr. Headbutts– because he’s no longer the only headbutt buddy, he’s become “Mister Headbutts”, signifying that’s he’s the premier headbutt buddy –has been recruiting buddies. Mr. H has become so fond of his pats and rubs that he shows up on command. That caught the attention of the other lambs who have started gathering close around him to watch as he gets his ears, head and chin scratched.  As you can see from this picture my ewes also like the attention and are beginning to feel slighted, thinking I’ve turned Mr. H, the lamb I’m petting, into an official pet.

As of today Tiny’s albino ram lamb now also “presents head” as a request for ear rubs, which he loves. Rosie’s little girl is very interested but too shy to step forward. Tiny’s second largest lamb is beginning to get in line. So, yes the day will come when I’m being pummeled from all sides by lambs that I’ve taught to head butt. I know I’m an idiot but they are so gosh-dang cute!

As for Mr. Headbutts, he’s become good friends with the puppies. Why? Because they love licking his ears and he loves that they lick his ears. The other day when I brought Kali and Radha their breakfast, he was standing with them at the gate. The girls get very exuberant about their food, leaping, bouncing, spinning and generally bounding. I’m working on “down.” Mr. H watched their antics in fascination, looking from puppy to puppy, then then lowered his head and bounced three times.  I nearly dropped the dog food I laughed so hard.

Now onto my miracle dog, who is once again moving like a normal Moosie after five laser treatments. I’m hoping we get at least a few painless months for him.

The other day I was discussing chicken-killing Radha with a contractor whose been doing a lot of work for us. He shook his head and said what most everyone does when I mention that one of my dogs has killed a chicken. “Once they taste blood, you can never stop them. They’ll just keep killing chickens.”

“No sir,” I replied, then pointed at Moosie. “It took me over 25 chickens and a whole bunch of turkeys, but he doesn’t kill my birds any more. Instead, he kills coons, skunks, gophers, otters, beaver, and other rodents. Radha’s only taken ten chickens so far. I’ve got a few more birds before I give up on her. If she doesn’t kill the ducks, then she can learn not to kill the chickens.”

Later that day I decided I couldn’t blame Radha for all ten deaths. I’ve found carcasses all over the property since the beginning of the chicken-killing spree. The chickens are, or were, free-rangers and went wherever they wanted, so I assumed the pups had killed them where they found them. Yesterday, I caught that young bald eagle hanging out on the bare sycamore branch near the coop. Not far from there along the creek was a chicken carcass. So Radha has killed SOME number of chickens, but that eagle as killed some as well. Perhaps some of those beautifully gutted carcasses had been picked clean by a hungry eagle and left for Radha to find.

The very next evening that new guy of mine called me out to the porch. “Come quick. Moosie’s killed a chicken,” he yelled.

I dashed out to the porch and looked down toward the front pasture in dismay. There’s Moosie, who had been playing (if digging for gophers alongside them can be called playing) with the puppies, carrying one of the black-and-white Barred Rocks by the butt, her feet straight up in the air.

“Oh, Moosie!” I cried as he dropped that bird in front of the pasture gate.

Down I went. As I entered the pasture, Moosie was sitting about five feet from the bird he’d dropped. He looked completely calm and cool, which is very unusual for him when he’s in killing mode. Radha and Kali are pacing about five yards from him and the chicken, not coming a step closer. That was really strange. They’re eating machines. If Moosie didn’t want that bird, why weren’t they battling each other to rip it to shreds?

Already sighing over the thought of having to skin yet another of my laying hens, I went to grab the dead bird. Much to my astonishment, she’s no longer laying on her back, feet up, the way Moosie dropped her. Instead, she’s sitting upright in the grass. I lean down to pick her up. Her eyes are bright, if unusually wide. She panting, her beak open and her tongue out. Well damn. Now I’m going to have to kill the injured bird before I skin her.

I picked her up, lifted her wings looking for blood and feeling her belly for puncture wounds. There’s plenty of spit on her feathers, but no punctures and no blood. She tucked her head under my arm. It’s true, chickens, like ostriches, will hide their heads when they’re frightened or shocked, and being carried upside down across three pastures by a killer dog can be pretty shocking.

I looked at the puppies. They’re glancing between me holding the bird and Moosie. Neither one of them has made any attempt to approach me. That’s when I looked at Moosie.

I could see it in his eyes. “Hey, if I’m not allowed to kill these birds then these stupid little dogs can’t do it either. I’ve told them to lay off, now take care of your damn birds already.”

Having said his piece, he smiled at me and turned, tail wagging, ready to leave the bird, the puppies and the pasture.

Yes, a dog who has killed chickens can be trained not to kill them. For the record, if Radha becomes half the dog Moosie is, she’ll be a spectacular livestock guardian.

← My Headbutt Buddy
A Paralyzed Chicken →