I’ve been enjoying a series of tiny miracles lately.  Let’s start with the ducks. Who knew they’d be so easy to manage (so far, knock wood)? The past three evenings the not-so-little-anymore Tractor Supply ducks have appeared at dinner time and followed me to the brooder coop, which they clearly think of as home. We reach the coop, they walk in, I close the door and little ducks are done for the day.

The older ducks consider the pond home and while they would like to be as well-behaved as their little cousins, getting back to the pond means running the gauntlet of puppies and sheep. I’ve twice made the mistake of using food to encourage them to be both bold and FAST. Both times, either the pups or Tiny drove them back out of the pasture. Apparently Modesto Chicken Layer Pellets is the food of the gods as far as dogs and sheep are concerned to the point of encouraging a war between the species. The other night Tiny drove off Miss I-will-surely-starve-to-death-if-I-don’t-eat-every-morsel-I-find Kali. That says something about how scary a determined ewe can be if she chooses to hold her ground.

With that lesson in mind, last night I locked the puppies into an alleyway with their dinner, locked the lambs in their nightly alleyway with hay, closed the gates on the ewes, and opened the front pasture gate. In walked the older ducks, talking at the top of their voices about how easy their commute was that night.

Then there are my back pasture miracles, starting with my laying hens. At about 3:30 PM every afternoon, my hens begin to gather at the back pasture gate, waiting for me. Well, not me exactly, but the compost bowl. This all started during those two weeks when I had to lock up the hens due to puppy and eagle predation. Trapped in their bleak little grass-less prison, the birds would eagerly watch me coming at feeding time, carrying the big aluminum bowl I use for compostables and an armload of comfrey flowers and leaves.

When I finally released the hens to again free range, I discovered that like Pavlov’s dogs, they salivated at the sight of that bowl. I feel like the pied piper with all my hens following me to their coop. The minute the last girl is in, I close the door and, et voila, chicken duty is finished for the night.

In what may be the biggest miracle of all, I’ve got my five turkeys once again living in the back pasture. As much as I miss having Tom up here–he truly misses being available to serve as the official farm greeter–I haven’t yet forgiven his hens for breaking into my garden. They stripped the leaves from every darn one of the kale plants I was counting on to supply me through the winter. It made it worth my while to hire someone to retrofit the small coop at the back of the property.

Of course, getting the turkey hens to identify that coop as “home” took a few nights doing my least favorite crossfit routine, that of herding turkeys. Tom, of course, is easy. He sleeps where I put him because I carry him where I want him. After three nights of rounding up fast-moving turkey hens, the girls knew where they were supposed to roost.

There are two reasons that they now go in easily at evening feeding time. One, I installed a handy panel barrier (how I love handy panels!) in the chicken coop doorway to prevent sheep and puppies from entering. It turns out that even the smallest turkey girls are too big to slide through any of the openings. The second is that, with that barrier in place and the turkey coop door closed during the day, the turkeys no longer have access to their commercial feed until I say so. Last night all five of them were waiting at the door to their coop. I walked in, put down their bowl, tossed a bunch of Black Oil Sunflower seeds for Tom, and by the time I was backing out, everyone was inside and eating. Hoky Smokes, Bullwinkle! For anyone who’s done that awful crossfit routine with me, you know exactly how huge this miracle is.

Today’s little miracle was very satisfying, if not earth-shattering. You may remember that a couple of weeks ago I separated the lambs from their mothers to wean them.  I knew then that I’d have to also separate the ewe lambs from their brothers and cousins. This morning, I was on the porch enjoying breakfast with that new guy in my life, when I heard Rosie’s little girl once again crying for her mother.

The words just popped from my mouth. “I think it’s time to put the little girls back with their mothers.”

“Okay,” he says, somewhat startled by my strange pronouncement. I think he’s getting used to my non sequiturs.

Rosie’s little girl called again. I stood up and there she was, standing right in front of the gate I would need to open to send her to her mother. Still wearing my morning attire (I like doing my chores in my PJs as it suggests that I’m not really awake–like chores are just a dream), I went down to the field, opened the gate, herded her a little and there they were, Rosie and her girl touching noses then going off to graze together.

Because that had been so easy, I turned around and looked for Mari’s little girl, the shyest of all my lambs. Unbelievably, she was standing near another gate that would take her right where I wanted her!

Certain I was asking too much of what had already been a pretty satisfying miracle, I went up to the gate. She watched warily but didn’t move. I opened the gate a little, and one of Tiny’s boys was on the move toward the lamb-sized gap. His big brother, The Albino, and Mr. Headbutts–who is Mari’s son– came running, in case something interesting was about to happen.

I spread my arms and urged the boys to one side. I expected the little girl to dart away. Instead, she held her ground, watching me. Grabbing a nearby handy panel (see above about me loving those things), I put it between the boys and Mari’s girl, opened the gate and the little girl walked right out behind me. She called. Mari came running.

Two small gates later and Mari’s daughter was aiming for her mother’s teats. For a moment I worried I’d made a mistake. Then Mari headbutted her daughter. The message was clear. No more milk for you! And off they went to graze. Unbelievable! 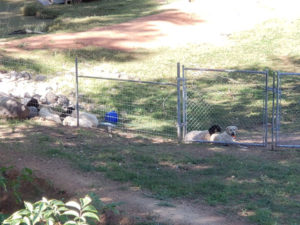 You may note in this photo that Kali is wearing her training collar. That’s Mr. Headbutts’ fault. That sheepish little imp just loves to whop the puppies with his head, then race away, daring them to chase him, which they cannot resist doing. Unfortunately, none of the other lambs are as excited about this game. I warned Mr. Headbutts that he has to stop that or I’ll be putting that collar on him.