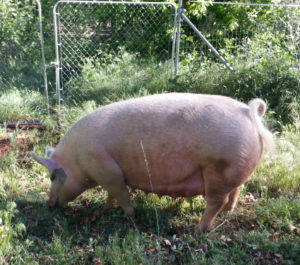 My goodness, is Miss Piggy HUGE! Her belly is so big between her legs that she waddles even worse than she usually does.  She’s also overdue…sort of.  From what my go-to source (Google) tell me, date of insemination isn’t exactly the start date for calculation.  Instead, I can add two to three days to that start date, then give her another three days or so, because she’s a gilt having her first litter.  Apparently, she knows this, because she’s taking her own sweet time.

Before I looked all this up, I was worried that I’d been mistaken and she wasn’t pregnant.  I’ll admit, I eyed those massive hams of hers and considered how many pounds there might be on them.  It’s not to be.  Yesterday, she turned on both the dogs and told them in no uncertain terms they were not allowed near her any more. Dogs, wolves, coyotes.  It seems all four-legged farm moms find canines completely untrustworthy when their babies are due.  My cows did it just before they calved and so did Tiny.  Miss Piggy also let Cinco know he wasn’t welcome near her, but I think that more to do with how he head-butted her when she wasn’t looking six months ago.

Just to reassure myself she was truly pregnant, I went to my back to my go-to source and read up on sows just before they deliver.  Nipples enlarging, check.  Belly drooping, check.  Solid bumps in said belly, check.

Then I scared myself by reading that it’s possible for piglets to get stuck in the birth canal just like calves and lambs.  No matter how much she likes me, there’s something terrifying about the thought of putting my hand inside a 500 pound, laboring hog, one with the capability to crush pecans in a single bite.  With my fingers still safe for the moment, I’ve got them crossed that she’ll do fine. That’s because I read on to discover that pastured sows and gilts have a lot less trouble birthing than sows kept in confinement.  Just like human mothers, walking makes the difference and pastured pigs walk.  Walking cures everything…except my heel.  It’s still better than it was, though.

This morning, she walked the whole back of the property, then once again made her way into the turkey brooder coop.  She laying there now, half-covered in straw and blissfully all alone because she drove out the sheep, who also like that coop.  There was no need to move turkeys, because only one turkey–well, one and half, since a sister-hen decided to join her on those eggs for a while–chose to nest in there this year.  More about that in a moment.  I’m thinking the brooder coop is where Miss Piggy wants to give birth.  Unfortunately, she’s gotten herself stuck in there a couple of times when the wind blew the door shut and any piece of chain link that would give way to that powerful snout of hers has.  There’s no way to keep quick little piglets from leaving mom to go on walkabout whenever they want.

As I was looking at the damage this morning, I realized that I can fix it with those six-foot-long “handy panels” I’ve been using to create temporary enclosures.  She can’t break those.  I know, because she’s tried.  I’ve got a line of those panels separating the orchard into “pig/sheep space” and my garden.  The panels are too tall for the sheep to jump and the pig can’t bend them.  The chickens, however, have figured out how to twist/climb/finagle their bodies into the larger holes two lines above the small ones meant to stop chickens. They’ve been working over the garden area some, but so far their interest has been in bugs and grubs rather than my plants.   I keep telling myself that all I need to do is add a line of chicken wire.  Right.  See last week’s post about “spare time.” 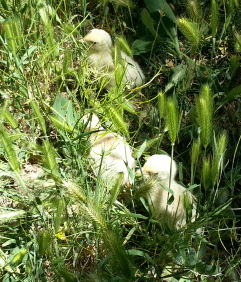 So, about that one turkey in the brooder coop.  She gave me my first poults for the year, a whopping five before she decided she had enough.  She abandoned the other thirty eggs and walked off this morning, then abandoned one of her five, bringing her down to four.

This does not bode well for this year’s hatchlings. And me without a single broody hen to under whom to push those other eggs!  I’ll never forget the little white cochin who hatched out eight poults while going through a broody spell.  I just kept sliding eggs under her and she was pleased as punch to sit on them.  It didn’t even seem to bother her when I absconded with her “baby” after it exited the egg.  She was just enjoying sitting.

Worse, Gabby Gray had a bad year, too.  She’s my original Narrangansett hen and she’s always produced at least twelve hatchlings.  As she has for the past three years, she chose to lay outside the perimeter fence in the wilds of the blackberries, which, for some God-forsaken reason, she believes are safe.  This year, I was proved right.  A week or so ago I noticed she had reappeared on my side of the fence. She looked depressed.  Her wings were hunched up to her neck and her head was bowed.  She walked as if it took all her energy to lift her feet.  And she let me pick her up. That was it.  I was certain she was egg-bound and dying.

Two days later, she perked up and, all of a sudden, she was squatting for the toms again.  Okay, you’ll laugh when I say this, but I think she was mourning her first lost brood.  Once she was past the grief, she figured she’d try it again.  Where did she go?  Back outside the fence into the wilds of the blackberries.

Sigh.  Mothers!  What are you going to do with them?