As of January 31st, my youngest ewes reached ten months of age, and that’s the right number if you want your ewes to give you little lambikins. But in order to have lambs, I need a ram. Ugh. Just ugh.

For those of you who don’t remember my previous experience with rams, here are a few reminders. There was the time that Cinco, my first ram and the father of Mari, butted me in the back and sent me sliding down the hillside. Then there was the time that Cinco butted me in the thighs and knocked me out of the little pink Crocs, which are long gone, mostly because of that incident. I ended up sitting on the ground with Cinco backing up as he aimed for my head.

Then there was the time that Butt-head Cinco hit my 800 pound sow, Miss Piggy, in the hams. Miss Piggy levitated a full foot off the ground— I swear this is true! I was standing next to her when Cinco hit her.— and did a 180 in midair. She returned to earth, teeth bared, then headed full steam toward Cinco. If you haven’t seen hogs running, they are extremely fast considering their weight and short legs. Then again, they’re supposedly related to bears.

Butt-head Cinco might have been, but he wasn’t stupid. He ran for his life and hid for the rest of the day. I was on scene the next day to witness his apology. As Miss Piggy watched him, mouth already half-open and braced to attack, Cinco very gently touched his head to her snout, then backed up. I had no trouble translating. It was clearly, “I screwed up and I promise I will never do that to you again.” And he never did. However, he did hit me one more time. Despite what you might have read about the meat of intact rams being gamy or rank, for the record, Cinco was delicious. Then again, it might just have been sheer satisfaction that made him so tasty.

So here I am with girls ready to be mamas and what happens? I go to my local Home Depot and in the plant section meet this guy who out of the blue mentions his son has a ram. I jumped on the opportunity and, miracle of miracles, the ram just happens to be a Dorper, the same breed as my ewes! (Not that I care about breed–turn your eyes, vegetarians–since these lambs will all find their way into my freezer. ) So I have borrowed his ram for forty-five days, which should be long enough to get the girls in the family way. Thank heavens for serendipity!

I’ll admit I spent the first day watching him like a hawk, waiting for the first attempt at head-butting me. But now that we’re two days into his forty-five day stay, I’m beginning to relax. This is because he’s fat, and Fat Boy is what I’ve been calling him since he arrived.

In his defense his obesity is not his fault. My girls spend their days dancing back and forth across more than two acres of pasture while Fat Boy has been living in a small pen. This poor ram! Try as he might, he can’t keep up with the girls he’s intent on seducing. Yesterday evening, I opened the orchard gate to bring them their evening rations. My girls listen for that sound because they know exactly what it means at that time of night. The gate had barely screeched before they were high-tailing it toward me from the far end of the property. Fat Boy followed, but the gap between male and female just kept widening. When he finally reached the orchard, he took a little sit-down before he started eating.

Not that my girls care that their lover boy is a little on the tubby side. All five ewes were watching intently as he got out of the trailer. Fat Boy turned one panicked circle before he noticed them. Noses were pressed to noses through the fence. After recognizing another of their species, Mari, Milly and Petunia turned their backs on him. Not Tiny or Rosie. Especially Rosie. 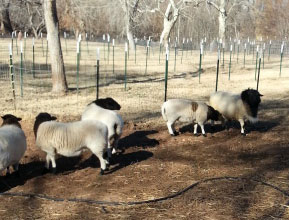 As if it had a life of its own, her tail began to wag. You know that saying, “I’ll be there in two shakes of a lamb’s tail?” Let me say that’s a really quick period of time, like nano-seconds. Rosie’s tail was writhing as she walked around this big boy again and again, pressing herself to his side, crooning “Why, hello there, sailor.” I knew her dance of the seven sultry woolen shawls was working when the mock headbutting began. Yep, Rosie will be the first to give birth.

Now, if Fat Boy can just catch up to the other girls, I should have ten babies in five months. As for the ram’s owners, they’re getting the benefit of The Farm’s new Ovine Exercise Camp.