It’s been four years since I last plugged a log with mushroom spawn. The oyster mushrooms that resulted were prolific and delicious, but after two years the log was spent and they disappeared. That’s when my friend Laurie requested that I do it again. So I ordered mushroom spawn from my favorite mushroom spawn company–run by mycologist Paul Stamets.

Why him? Because I loved his Ted talk which I saw a million years ago, and I loved his book, which I bought after I saw the Ted talk. Back then I never thought I’d have the chance to grow my own mushrooms. I mean, where was I going to find a freshly cut hardwood log? 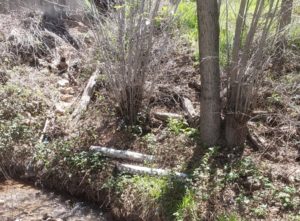 You can see where this is going. After the creekside clean up I have hardwood logs coming out of my ears. It also just so happened that I had a two-year-old unopened box of oyster spawn under my desk. Last week, figuring I didn’t have anything to lose but a log, I opened it up. Armed with a drill bit, rubber mallet, white-fungus sodden wooden dowels and food-grade wax, Christina and I filled an alder log with what will hopefully be mushrooms.  Once finished, we carried it to the place where the ditch bends, creating a sort of flat peninsula just the right length for the log.  When the surrounding trees have leafed out, the log should be shaded even on a hot summer afternoon while the flowing water keeps it moist. If I can’t grow mushrooms there,  they won’t grow anywhere on the property.

I thought that was it for mushrooms, but the fungi bug bit Christina and she decided we needed to try shiitakes. She ordered her own package, which, due to the world we live in today and our need to be perpetually busy, did not gather any dust before being opened. Once again, we chose an alder log from the piles that still sit along the creek, waiting for us to turn them into firewood.

We used the same drill bit and rubber mallet that came with the first package, and all went well until it was time to cover the plugs with wax. That’s when I discovered that her package didn’t include a little paint brush for applying the wax. Of course, I hadn’t saved the brush from the previous package nor did I have any spare paintbrushes. Unwilling to be stymied so close to success, I tried paper towels, then a metal spoon. That’s when Christina went to the work bench, found a length of cotton rope. She cut a couple of hanks, then unraveled them. Presto! Tiny little brushes! Huh. Even better, they worked!

With that, we carried the log to the same general area as the first one. It’ll be three to six months before we know anything, but hey, it’s just wood and time.

Speaking of time, it seems that my ducks have developed an acute sense of time. Over the past several months, they’ve displayed a certain rigidity in their daily routine. The door to their coop must be opened at dawn’s first light (or they complain). At ten in the morning, they float up next to the ditch wall and tuck their heads into their backs for a quick nap. At noon, they leave the water for the front pasture where they graze on grass and hoover up whatever spilled chicken and rabbit food the dogs have missed. After that, they return to the water until three, when they come quacking and waddling toward their coop.

Woe be it to me if I haven’t filled their food dish and refreshed their water tub by 3:03 PM. One minute late leaves them pacing back and forth in front of their coop, discussing how unfortunate they are to have such an uncaring keeper and what a good idea it is that they never get too friendly with me. Their criticism usually has me appearing right quickly.

But the other day I lost track of time while working in the garden. Oh the joy of having my hands in the dirt! I spent the whole afternoon I thinning and weeding, then turning the soil as I prepared it for more seeds and transplants.

It seems I haven’t yet recalibrated my own inner time clock since the equinox. It was past four before I realized it. I shook free of my gardening and made my way back to the barn, still completely engrossed in the seed packets that I would have to return unopened to the planting table. 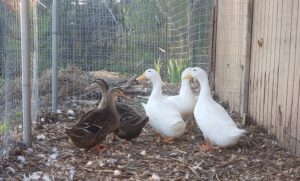 As I set aside the seeds, I caught a glimpse of movement from the corner of the barn. As I watched, one of the dark Rouen ducks peered around the corner. She watched me for a moment, then took one cautious step, hesitated, then took another careful step. Then tilting her head to the side, she said “QUACK, quack, quack.” Hidden from my view around the corner, her sister ducks offered a chorus of “quackity, quackity, quack,” which meant they were all turning their heads to the side in that strange way they do.

My mouth dropped open for an instant, then I laughed out loud. Apparently, this poor girl had drawn the short straw. She’d been sent as the reluctant messenger to remind me that I was AN HOUR LATE!

What else could I do? I hurried to see them fed and watered, apologizing all the while.

← Ready for Poults
Ducks are Weird →