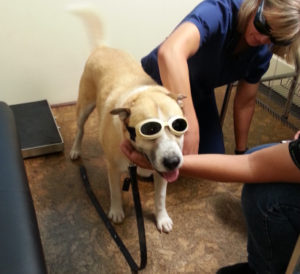 Once again, I’m going to offer a couple of updates before I start talking ram lambs. That’s because in my last post I mentioned that Moosie was hurting again. Well, after I posted that his hurt clearly became unbearable, and he turned back into a three-legged dog. So we went to the vet for another round of laser therapy. This time I just had to take a picture of him in his protective goggles. These goggles were made for Moosie, with his big bulbous freckled nose and floppy ears. I swear, he’s almost as cute as Snoopy! So, for your viewing enjoyment, here is my World War I ace pilot being prepped for take-off.

Many thanks to Dr. Cinda and Chris at Golden Bone Wellness Center for making such a difference. Two more treatments and he’s clearly feeling himself again.  He’s even decided it’s okay to play with the puppies and tried to steal one of my new meat chicks.

There’s been some change on the chicken-killing front but no solution. After losing another four chickens to Radha, I’ve locked what remains of my flock into the back barn. It’s roomy, airy, and cool, but there’s no grass. Instead, I’ve been bringing them bucketfuls of weeds and great, huge armloads of comfrey, which they seem to enjoy. One managed to find a small escape hatch in my fencing. Fortunately for me she was one of the friendly Barred Rocks and (stupidly) squatted for me when I started chasing her. I snatched her up before Radha caught her. It actually became a pretty good teaching moment, especially since Moosie was there as well and I was giving him the same commands Radha was getting. Moosie probably thinks it’s unfair that this new puppy is allowed to kill and eat chickens when he’s not. After that, I found the (itty bitty–how in the world did she get through that?) hole the chicken used to escape and plugged it.

I have to say it’s been very nice not to have to worry about what’s dying while I’m up in the house writing. I swear, that puppy can kill and eviscerate a chicken faster than I will ever be able to do. With no chicken distraction, I’ve been able to concentrate on Radha’s behavior around the lambs. All the ewes are clear about which dog is trouble. Not one of them reacts to Kali’s presence. All of them welcome both Moosie and Bear. And all of them will charge Radha even before she does anything, which she takes are a double dog dare. She dances away with a great big grin on her face, spins and races back at all the sheep, scattering them.

She now wears her electric collar full time and we sit together in the flock every night for an hour. I’m a little worried this will backfire on me. That’s because all the lambs have become very curious about the two of us. Every one has come to put their noses against Radha’s while my finger sits on the zap button. I can see her struggle to control her urge to either treat them like another  puppy or like a meal. I don’t think she knows which way that will actually play out, and frankly there isn’t much difference. Listening to Radha growl in play is pretty darn scary. I expect her to sound like Cujo when something really dangerous appears.

The friendliest of the lambs has proved to be Mari’s little ram lamb, now officially known as the “Headbutt Buddy.” First, I cannot believe those lambs are now more than a month old! Where did July go? After all the death and pain that accompanied their births, I’m thrilled that all of them are doing so well. Tiny, being the mom she is, is already beginning to wean her three boys. This may be because they’re all big enough now that when they hit her udder to prompt the flow of milk it literally lifts her back feet off the ground.

Rosie, as I’ve mentioned before, is that teen mom everyone worries about. Time and again, I’ve seen her off by herself, grazing away while her little girl goes to hang with her uncles and her grandmother. All of a sudden Rosie’s head will snap up and turn frantically from side to side as she looks for her only child, the one she didn’t notice was missing for more than an hour. She’ll bleat out a call and, from a distance, I’ll hear her little girl respond. And that’s all she’ll do, call back to her mom. No way is that neglected child expending any energy to look for her disappearing mother. Mama has to come to her.

As for Milly, after the trauma of giving birth to her “Blackleg”– this isn’t a name, just what I call him because the black color from his Dorper head spreads down his front left leg to his hoof as if he were wearing one black stocking– has turned into a wonderful mother. Like Mari, who is Milly’s mother, Milly keeps her child close and safe. Although he was the last born, he’s now second biggest, next to Tiny’s albino boy.

Mari has proved to be the best mom of the flock. She keeps herself and her babies to the side, so her lambs mingle less with the others. That’s why it surprised me when the Headbutt Buddy came up to me on his own. Maybe it’s that Mari’s close attention gave him more confidence than the others.

Okay, that’s anthropomorphizing. Mari is a ewe. Surely, ewes couldn’t give a fig about good self-esteem. They’re much more into eating windfall apples, especially when those apples are halfway to hard cider. But that’s another story. Drunken sheep are pretty funny.

At any rate, Mr. HB is the smallest of the ram lambs and the friendliest, by whatever means that occurred. And he loves it when I put out my fist. He leans his forehead against it and pushes with all his might, then lets me scratch his head, ears and neck. So the other day while I was sitting with the leashed Radha at my side, both of us watching the flock, Mr. HB comes right up to me. He lowered his head in invitation. I put out my fist and he pressed his head to it. Radha watched in fascination, then got up, her full attention on him. He turned toward her, meeting her nose-to-nose, then let Radha examine his ears, his legs, his tail. Then much to my horror, she sort of sunk her teeth juts a little way into his wool, as if testing him to see if he tasted as good as a chicken. A quick zap put an end to that. Why is it that Kali gets this and she doesn’t?

But that didn’t put Mr. HB off me. Now, every time I come down to the flock, he’s right in front of me, offering his head. This is catching the attention of the other ram lambs. Hoo-boy. I’m an idiot to encourage but I tell myself it won’t be for long. And right now they’re all so stinking cute. Besides, I have the alleyways and wonderful new fences. I can keep them safely locked up until the moment arrives.

What is it they say about the illusion of control? What if I end up with five Cincos on my hands? Then again, Cinco was very delicious, very delicious indeed.

One Response to My Headbutt Buddy