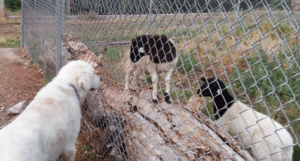 Wow!  Having sheep has changed Bear.  He’s become Mr. Protective.  Well, when he’s not being his usual sweet doofus.  This includes a big step up in his  barking.  As I mentioned, those first few nights after the lambs arrived were so bad I had to put on his bark collar.  Now, mind you, the collar wasn’t turned on, but he didn’t know that.  The action of putting on the collar is enough to let him know to tone it down.  Over the last weeks, as having sheep has become more routine, his barking has receded to his normal half-hearted commentary, usually delivered from the corner of the porch closest to my open window.

Then last night around midnight, Bear went crazy.  His barking was frantic and punctuated with high-pitched huffs.  My eyes flew open.  As I always do when the big dog barks, I listen for the little guy.  When Moosie barks, there’s something to worry about.  Sure enough, Moosie took up the chorus.

That’s when I heard the coyote.  Judging from its voice, this was a big critter–close to, if not Moosie-sized.  It was yipping from the front fence right where the *&%@ pyracantha that the previous owner planted probably three decades ago had torn a good-sized hole in the chain link.

I hate pyracantha.  It’s common name, Fire Thorn, says it all.  A tiny prick from one of those inch-long nasties burns for hours.  Okay, so the birds love it, especially after the berries have fermented a little.  Nothing so cute as a LLB (little brown bird) smiling and nodding as it stumbles around the pyracantha in a drunken stupor. And, it can be an attractive plant, if well cared for.  That is not the case for the dozens of bushes that had been planted every few feet outside my fence line.  These plants had been left untended and unwatered for years.  Branches had twisted through the chain link while small, then grown until the metal fencing and wooden limb melded permanently, never to be removed…ever.  If you drive down Page Springs Road, you’ll recognize my fence–it’s the one with the interesting wooden fence art. I’ve removed all the dead bushes and have started on those that not only didn’t die from neglect, but actually thrived.  After six years, I’m about a third of the way to success.  As you can imagine, the plants left gaping holes as they departed as well as tearing the base of the chain link loose.  I’ve blocked and staked these gaps as best I can.  I don’t want to replace this fence with more chain link, I want block, mostly because that will prevent any further car intrusion from the road.  But Yavapai County will only approve said replacement if I close the lane closest to my property and hire a flagman to stop/redirect traffic.  That’s a $30K bite, so I’m still waiting.

Okay, diatribe over.  Back to the yipping coyote standing about ten feet away from my house, trying to use one of those gaps to get to my dogs, cats, sheep and birds.

That yipping sound brought me straight up to sitting.  It was so loud I thought the coyote was already inside the fence.  That’s certainly possible, and they don’t have to come through the fence to do it.  As long as they’re willing to swim, they can enter through the Mason Ditch at either end of the property.  I worry about that a lot.  Moosie wouldn’t be able to stop himself.  He’d throw himself at the pack, entering the fray and fighting to the death.

As I was wrestling myself out of the sheets and fumbling on the nightstand looking for my glasses, the big coyote howled and that’s when I heard the rest of the pack.  OMG!  They all sounded like they were climbing the fence or already inside it!  By the time I had my robe on and was headed for the door, the big coyote made that aggressive challenging sound that all canines make when they’re ready to attack.

My dogs!  And me without my trusty Rogue Hoe!   (Would I swing an 8 pound hoe–blade sharpened to a nice edge to better cut through sun-hardened clay–at a coyote with the intent to kill or break bones?  You bet I would.)

Just as I threw open the door I heard something I’ve never before heard.  Bear snarled.  The sounds that came out of his throat would have been enough to make my blood run cold if I didn’t know what a marshmallow he is.  Or, that I thought he was.  It was Gandalf challenging the demon: “You shall not pass!”

All of a sudden, the coyote was crying and retreating.  From the sound of it, blood had been shed.  Both dogs met me a moment later.  It wasn’t their blood.  I breathed in relief and hugged the Bear. Apparently, lambs bring out the best in him.

One Response to New and Improved Bear