New and improved…that’s the title not only of this post but for my life, and it’s all thanks to my “Brother of Another Mother” Gene Lindow.  My ex-brother-in-law came to visit last week with the promise to help me retrofit the turkey coop so it’s otter-proof.  But he did so much more.

Gene and I are kindred spirits in so many ways.  Both of us are unrepentant workaholics who truly love our work and the challenges of what we do.  In his case he runs Glo-Bowl Fun Center in his home town Marengo, Illinois–and let me say that running a bowling alley is not an easy task in today’s economy.  Despite the stress to which we subject ourselves, we also both love to laugh and find the funny in whatever plagues us.  Doggedly loyal, emotional and opinionated.  Sometimes in need of a 2 x 4 upside the head to catch our attention.  We both use physical work as a stress-reliever.  Yeah, we’re kin.  And, as Gene so casually said without realizing he changed my life when he did it, we’ve known each other for half my life.

Simple words, big effect.  I don’t know why I hadn’t realized that I’d spent half my life married to his brother.  Maybe the years slipped by so quickly and were so full of activity that it never occurred to me so much time had gone by.  For some reason, that realization makes it possible to let go of a lot of the agonizing.  And it opened the door to the word “Forgiveness”.

I’ve been struggling with that word for a good while now.  When you grow up in a dysfunctional and abusive family, words and their meanings can become really powerful control tools. “Our family is no different than anyone else’s” is a great example.  So is “Tomorrow will be a better day”. Forgiveness was definitely a word in that arsenal.  In my family it meant excusing or ignoring the harm someone did to me while never expecting (or receiving) a reciprocating promise from that same someone to change their abusive behaviors. The other description for that is “Doormat”.

No matter what else I can say about the last sixty years, I’m absolutely certain I no longer have “Welcome” stenciled on my back.  But neither do I want to carry my past into the suddenly wide open future of my next thirty years.  But to be able to step into my future I knew I needed a new definition for forgiveness, and I discovered it this week. It now means I acknowledge that the person who hurt me (that includes me hurting me) is human and that humans sometimes make catastrophic and stupid mistakes (or have long-term issues of their own that cause them to do terrible harm to others), even those they love most.  What forgiveness no longer means to me is that the act of forgiving means I then “welcome” that same person back in my life.  I don’t have to give anyone the chance to do me further harm, no matter our past history.  My future just got more spacious and easier to enter. 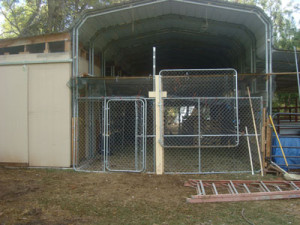 As for the turkey coop, Gene created a miracle with just $150.  The coop has a wonderful new roof (corrugated metal sheets found in the hayloft) that rests on sturdy rafters (metal well piping long ago extracted from one of the two wells on the property, neither of which worked).  These “rafters” rest on braces screwed to the sides of the barn (the braces are pieces of the 2 x 4’s from an old chicken coop I dismantled).  More well piping tied onto old pallets, which are tied to the chain link panel coop sides, with baling twine serve as roosts. 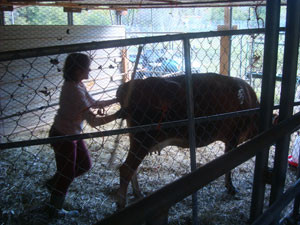 nk you Gail and Bob Haugland) that prevents cow intrusion–as long as I keep the door closed.  I had it open for an instant when I went inside to retrieve food pans and Elsie dashed through the opening.  That’s me shoving her back out of the door.  After that, you should have seen the cows studying that door.  I think Georgie even considered getting on his knees but swiftly realized that cows can’t crawl.

As for the turkeys, they absolutely love their new space.  I think it’s having a solid roof overhead that does it, especially since I suspect they’ve seen a number of their natural predators crossing the previous chicken wire ceiling.  They go in easily and settle nicely on their roosts, making that sweet little peeping sound that happy turkeys make…just in time for Thanksgiving…