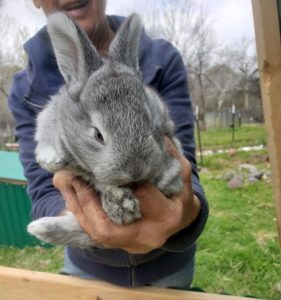 It happened this week. The baby bunnies went from infants to tiny rabbits. They’re two and half weeks old now and have quadrupled in size. Their eyes are open and they’ve stopped squirming on their bellies to hop like rabbits.

And they despise Christina and me because we cannot help ourselves. We absolutely must pick them up.

That they’ve gotten so big was a reminder that they’ll need somewhere to live soon. I started pondering, which means I returned to Youtube and once again searched for videos about building mobile rabbit coops or tractors. Everything I saw made from wood was built for six or twelve rabbits and looked both heavy and awkward to move. Only one recommended a base that allowed the rabbits to graze easily. He did it by installing 2 x 4’s every few inches–just far enough apart for the rabbits to put their faces into the grass but not far enough that they could dig their way out in one twenty-four hour period. I paused the video and studied it for a long moment. That looked really heavy when I really don’t want to try to drag a really heavy coop over my rolling, rock- and stick-strewn pastures.

That had me doing another search, this time for PVC rabbit tractors, just to see. The video that caught my eye was done by Lequse Jones of Nigeria. Oh my goodness, but his little coops and tractors built all of PVC and plastic chicken wire are clever! He has even built feeders and waterers out of three inch PVC pipe with holes the right size for rabbit noses. He uses caps and corner couplings to keep the water and feed from escaping. Best of all, he tells me on one video, I can use a toilet brush to clean the feeders.

I thought they were perfect. Okay, I thought they had potential, because I have a lot of leftover PVC in the barn and fittings of all sizes. I was just getting ready to start on it when the shelter in place thing happened, and all of a sudden Christina was here full time.

Together, we laid out pieces of half inch pipe–that’s what I have the most of–to check the tractor footprint. We swiftly discarded six feet by four feet for four by four,  with sides that slant down two and a half feet to two feet. Then, using corner pieces we raised the walls and stood back to consider the lid. 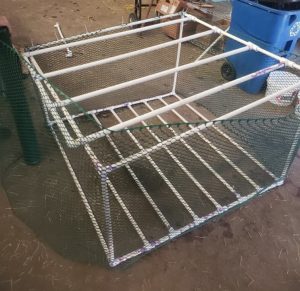 That’s when Christina had her brilliant idea. She ran to one of my many bins of PVC fittings and found a three-quart inch “T” and slid it onto the upper pipe of the back wall. Turning it this way and that, she announced, “Hinges!”  A few pieces of three-quarter inch pipe later we had a working lid.

It was time for the floor. I still wanted that same grazing gap that I’d seen on the wooden tractor, so we went with more half inch pipes and “T’s” and lots of carefully sizing. I figure if it really doesn’t work, I can still put fencing on the bottom, attaching it to the pipes.

By the end of that afternoon we were purple with primer and sticky with PVC glue, but the basic box was built. It took a whole package of zip ties to attach the plastic chicken wire to the frame. I have plastic corrugated roofing cut and ready to be screwed onto the three-quarter inch pipes that make up the lid.

The reason it isn’t finished yet is that as much as I like it, I’m still worried about the coop blowing over or being knocked over by a dog or other predator.  Moreover, I think the rabbits need some sort of hidey-hole where they can escape being seen. I’m working out how to add a narrow wooden frame to the back, which would add some weight and can be enclosed with something simple like shade cloth.

Maybe I should have filled the pipes with sand. But then I’d be right back to dragging around a heavy tractor.  Better to try this out and see how it works.  After all, it’s only cost me is a few fittings and some corrugated roofing, making it the cheapest thing I’ve built. If it fails, I’ll chalk it up to experience and return to the back of the barn where I store my tools and leftover 2 x 4’s.

If that happens, I’ll have to hurry. Those babies won’t be babies for much longer and it’s already time for Bitsy and Babs to visit Buddy so we can do it all over again.