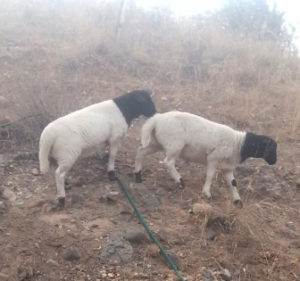 It’s time for a lamb update. I can hardly believe that the two little guys (who don’t have official names for a reason) have been around for almost 3 months now. Not only that but in three months time they’ve gotten huge! They’re almost as big as Peanut and Mari, their biological if not chronological siblings. Another three months and they’ll be–gulp–rams!

That’s the result of Mekko’s unfortunate death. I’ve decided to stop castrating. If I’m not keeping them on the farm for pets, there’s no reason to do it. The sheep, like my pigs, are meant to feed me and the dogs, who, I might note, eat 60 pounds of meat a month between them.

My dogs are on the BARF (bones and raw food) diet. This has turned out to be an expensive but good choice.  Both dogs have no gum disease and sparkling sharp, white teeth. Ask me how I know about how sharp their teeth are and I’ll tell you that Bear has a breed-specific arthritis. Although Moosie at almost 5 is in perfect form, at 4 years old, my sweet, rescued purebred Bear is halfway through his life. I noticed this summer he’s starting to move like he hurts, so I thought I’d try giving him Glucosamine and Turmeric, hoping he’d regain some mobility. It has worked for him. It would work better if he’d give in and just agree to take the pills.

The effort of getting two pills down Bear’s throat once a day has stepped up my dog-herding game. Before that, I tried putting them in his food. He avoided them. I tried coating them in yogurt. Ptui. I tried offering them in yogurt plus a couple of dog treats, a routine that Moosie fully endorses because he gets dog treats at the same time. Bear remained unmoved by my pleas.

Of course, by this time Bear had figured out that I intended to give him pills every day FOREVER and he began to avoid me. I kid you not, I have followed him for more than two acres–me holding goop-wrapped pills in my fingers–as he walks slowly and steadily away from me, his head so low that its almost tucked between his front legs. He’s a 135 pound stealth dog. If he doesn’t want to be caught or seen, he isn’t. One day he actually jammed his head between the magnolia trunk and the cement wall to avoid me.

When I finally do catch him, I have to one-handedly bring up his head, pry open his massive jaws, stick my fingers between sparkling sharp white teeth until the pills are on the back of his tongue, then hold his mouth shut until he swallows. This week I started coating the pills in maple syrup. I may have hit on the magic pill as it were, but even the syrup only works if I can herd him up to the house, which he now avoids during that “pill-giving time of day.”

Anyway, back to my not-so-little lambs. Today, I put the goats (my friend’s goats are visiting again) and sheep up on the hillside.

While the grownup critters made their staid way up the path, the two little guys immediately started hopping.  Up the steep rock wall they went, then down they came at full speed. Around the oldsters they ran, then up, down, bounce right, bounce left, up iddlyup, up and down diddly down down.

That rock-studded, sheer-as-a-cliff hillside is the best playground ever! They’ve knocked over all my sprinklers finding their way to the tasty mesquite trees, fallen alder leaves, and blackberries–lots and lots of blackberries. You can almost see them giggling as they tumble down a sheer drop in a shower of dirt and rock. They love this game so much more than the two other games they know: Headbutts and Mount-you. Sheep aren’t big on variety.

A month ago the boys were too small to be annoying while they played. Now, everyone from turkeys to goats is tired of them. They bound toward Tom and get the turkey threat sound (which means nothing to them).  Peanut, who is usually tolerant, has taken to scratching his hoof in the dirt like a bull (which means nothing to them). Mari lays down, so they bounce over her on their way to annoy their mother, who, like any mother, ignores them as she continues grazing. The goats don’t know quite what to think. They’re so much taller that a lamb running at their legs just isn’t something they expect.

I tell you, everyone, absolutely everyone, is grateful when I get those boys up on the hillside. I know every one of them is thinking, “Thank heavens! We’re safe for a little while.” Whew.

2 Responses to Not-Beavis and Butthead