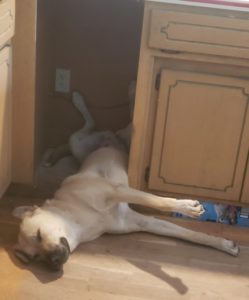 The title of this post was supposed to be “An Ode to Cukes.” I actually considered writing an ode, but after some research on the format, which I vaguely remembered from high school English class, I decided I would only embarrass myself if I tried. Instead, I’m inserting a picture of Radha here, because…well, because I cannot believe that dog sleeps like that. This is a ninety-pound Anatolian Shepherd who has a penchant for tight corners and small spaces. She looks dead, or at least uncomfortably stiff.

As for the cukes, yes, I’m still writing about cucumbers but none of the lines will rhyme. This will, however, be short, much like an ode. Seriously, how much can anyone say about a cucumber?

Let me clear. I’m not going to regale you about how much I love the taste of cucumbers, or how well they grow here. Actually, they usually don’t do well for me at all. A few years back I believe I wrote about how I was fighting off farmer ants that planted their aphid crops on the stems and leaves of my vines. No, what I’ve fallen in love with is the amazing colors of overripe cucumbers. 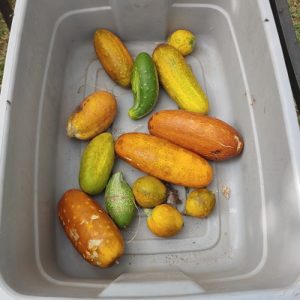 Like everything else I planted this year, my vines were set too close to each other. I did this mostly because I figured most of them would die. Nothing did and my garden is now a jungle. The cucumbers became a tangled thicket. I had no idea no idea how many I’d missed until a couple of weeks ago when I began discovering vibrant orange cukes the size of a small butternut squashes tucked into odd spaces. One gopher had the clever idea of burying the cucumber in dirt and eating the part that was underground.

Having never before seen a fully ripe cucumber, until that moment I hadn’t realized that orange is their ripe color, that we eat them when they’re underripe the way we eat green peppers. I’ll admit here and now that I haven’t tasted one of these orange beauties. I’m pretty sure they’re going to be bitter. But the chickens have no such hesitation and they’ve been feasting.

It was as I was cutting these up for the chickens that I began to gain an appreciation for the amazing colors and patterns on their skins. As you can see in the picture, some of the big orange dudes have ridges that look like scars. The cucumbers that are just barely past green are streaked with yellow and have pockets of blue that’s almost turquoise. It’s like they’re unraveling the green, separating it into the original colors. Who knew such a humble vegetable could be so beautiful?

Hence, my embarrassing and swiftly squelched desire to pen an ode. Instead, I’ll save seeds from a few of the orange ones to plant next year. That’s paean enough, I think.

Oh, and by the way, all of my knives and most of my tools have made at least one pass through the sharpening machine. Most of the knives need more work, but that thing really sharpens tools. I nearly fell over the first time I used a newly-sharpened billhook. I wasn’t prepared for the blade to slide through the branch like it was butter. Oh, for an Ode to Sharp Tools! (Far more useful than Grecian urns.)

← Getting Edgy
Karma is a Female Dog →