On the first day of May a rancher called to me…please come out and help me milk Cissy.

So if you’re creative with “The 12 Days of Christmas” that line works pretty darn well.  Yes, this Crone is milking a cow again, a cow that used to live here but now lives down around the corner at Tres Hermanas Ranch.  Cissy, or Sissy as they now spell her name, spends her time there grazing with 80 or so head of 100% grass-fed Angus.  Cissy was a dairy reject from Glendale.  I got her as an 18 month old heifer just after her first fresh (her first calf).  The dairy was willing to sell her because she kept kicking off her teat cups.  That resulted in dedicating an employee to stand behind her and hold the teat cups in place as he dodged her hooves.  I’m sure they were happy to get rid of a problem cow when they sold her to me.

As for me, I didn’t know what I was in for, taking on a cow who’d been born on a factory farm.  First, she was unaccustomed to being touched by humans.  At the big dairies there are just too many animals for them to be treated as anything other than “cogs in a wheel”.  Moreover, twisting a cow’s tail is how you “encourage” a cow to behave. As you can imagine, she was very shy that first day.  But I had the advantage of being female.  Only men worked at the dairy.  By day two, she’d discovered pats and scratches were really nice.  Also, because she missed her big herd, she stayed close to Brighty.  That meant I had no trouble getting her to come up to the trough when it was time for milking. And once it was her turn, she had no trouble with standing in front of it to eat the hay she was given.  But milking?  Not with that vacuum milker!  To Cissy, the miracle of escaping the dairy meant never having a teat cup on her again.

With a sigh, I gave way.  I put my hands on her teats, expecting to battle for every drop.  It was Cissy’s turn to sigh.  Hand milking was just fine with her.  That had me grumbling.  I’d just bought that vacuum milker so I wouldn’t have to hand milk any more.  I promised myself I’d hand milk her until she got accustomed to the farm.

It took her three days to learn how to graze.  Seriously.  Until she got here, she’d never seen grass growing from the ground.  She had no idea what to do with the stuff.  Then on that third day, I caught her biting tiny mouthfuls, moving the blades around her mouth with her tongue as if testing the texture, then chewing.  Once she figured out how to make that work, she was dancing across the pasture, tasting this leaf, trying that blade.

Equally astonishing to her was the Mason Ditch.  Obviously, she’d never before seen a stream.  Her water came in a trough.  I was working in my garden when she first tiptoed her way down the bank and stuck her nose into the water.  Her head came up with a start as she snorted water out of her nostrils.  In her head went, out it came, dripping.  She did it again, then again, playing with the water.  I looked away for a moment.  When I looked back she was in the ditch, kicking with one front leg, then the next, like a kid in a bathtub.  Laughing, I went back to working on the row I was planting.  The next time I looked back, all I could see were four hooves in the air, flailing.  Although there was nothing I could do to help right a cow ten times my weight, I took off for her at a run.  By the time I was halfway there, she’d come back upright and was shaking the water off as she climbed out.  Apparently, no harm was done, because she was back in the ditch a few minutes later, splashing and playing.

After that, she became a 1000 pound puppy, following me around the farm, calling for me if she couldn’t see me and trying to follow me up the porch stairs so she could come inside with me. Hoo-boy.  Cute, but not exactly what I had in mind, cow-wise. And she kept refusing to take that vacuum milker when I had a book to finish. Back then, before I had researched everything I could find about keeping a family cow, I was milking twice a day.  That’s a good chunk of time when you’re trying to finish a book, which I am once again doing.  Nine thousand words to go!

That’s when I sold her to Ernesto at Tres Hermanas Ranch.  They already had cows for beef, but he and his wife wanted milk as well.  They had a ranch hand at the time who liked to hand milk.  As for me, I knew she’d be going to a place where she could dance in streams and graze all the grass she wanted.  And, they were just down the way from me, so if I wanted to visit my pet, I could.

Well, the guy doing the milking left and their Sissy dried up.  She was with calf by then, so that was fine.  When she dropped her calf, somehow the milking never started up again.  Another pregnancy occurred (that happens when you keep bulls) and this time Ernesto was determined to keep the milk.  By then, as happens when dairy cows aren’t regularly milked, her udder had lost its regular shape and her quarters were inconsistent about the amount of milk they produced.  Then again, she really wasn’t there to be milked.  She’d become their pet, and the producer of “wedding gift” calves.

With the next calf, Ernesto called again.  They were milking her with a little hand pump and it was taking too long for his ranch hand to do the job.  Plus, it seemed she had a bit of mastitis.  Could I help?  I could, but only if she agreed to take the vacuum milker.

Let’s just say Miss Ciss wasn’t a fan, but the ranch has a squeeze shoot.  Try as she might, once she was in that shoot she couldn’t kick off those cups.  I’d like to think she remembered me.  If she didn’t, she got to know me again over the next few months.  Once she was in the shoot, I’d talk to her as I brushed her and fed her Chaffhaye, which is her most favorite thing in the whole world.  Then, it was time to dry her up again, mainly because we were all tired of milking her.  So off she went to cavort with the bull, graze as she wanted and keep her eye on the flowing water.

Last week, Cissy again dropped a little bull calf.  By this time, I’d sold Ernesto the milker for Cissy.  Well, her little guy struggled for those first few days, a little lethargic and weak, and unable to latch on the way he should have.  That left Cissy with mastitis again.  Ernesto put the milker together, but couldn’t get vacuum.  When I arrived, I found the rip in the tubing, reassembled the pulser with the base turned the right direction (in Ernesto’s defense, these are both hard flaws to spot when you first start assembling milkers) and we went to put it on Cissy. 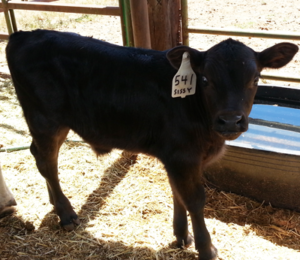 Again, I’d like to think she remembered me.  Maybe she did, because we tied her to the fence and revved up the vacuum pump.  She didn’t so much as move a hoof.  I put the milker on her.  She kicked once at the right rear teat cup, telling me which quarter was hurting, then stood perfectly still as the milker emptied her.  I stayed on my knees next to her, talking and patting, as I watched the milk to see if any of her other quarters were affected.  About halfway through, the little guy, who had by then had found his bounces, made his escape, climbing through the pole fencing to visit the horses.  Calm dairy cow became worried mama cow, and that was the end of that.  I left yesterday, promising to come at noon every day from now on to milk her out.

Today, we put Cissy into the hospital headlock.  I don’t think she needed it. Once I got the milker on her, her shoulders relaxed.  To my surprise, it wasn’t just the right rear quarter that was hurting.  It took forever to milk out that back left quarter.  When I removed that last teat cup, she was visibly relieved and ready to leave the headlock.  Only I couldn’t figure it out.  I pressed this lever, moved that handle.  The doors wouldn’t open.  As I bent over in front of her to try yet another lever, she pressed her nose to my hair and gave me a quick lick. I stood up and scratched her nose.  I guess she’s still my 1000 pound pup.