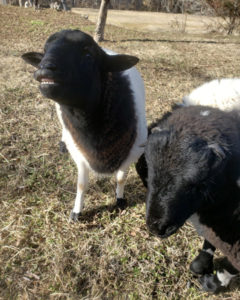 So the ram lambs are getting close to grown up now that they are almost 6 months old. How do I know that? Because they’re playing their two lamb games–“headbutts” and “mount you”–in earnest these days. These days the two lambs do more than simply touch their foreheads. Instead, they back up a considerable distance and launch themselves at each other. You’ve seen this in nature films. It’s as bad as it looks on TV.

Why them? Because they’re the friendliest of the five. Rams. They only hit the ones they love.

This is Headbutts, standing next to the unfortunate Blackleg, showing off his friendliest expression. Look at those pretty little white teeth. By the way, they only have bottom teeth. That’s not really a smile. Instead, what he’s doing is sucking in air and tasting it with his Jacobson’s Organ. If you don’t know what a Jacobson Organ is, here’s Wikipedia’s definition:

“The vomeronasal organ (VNO), or Jacobson’s organ, is the paired auxiliary olfactory (smell) sense organ located in the soft tissue of the nasal septum, in the nasal cavity just above the roof of the mouth (the hard palate). The name is derived from the fact that it lies adjacent to the unpaired vomer bone (from Latin vomer, plowshare, for its shape) in the nasal septum. It is present and functional in all snakes and lizards, and in many mammals, including cats, dogs, horses, cattle, pigs, and some primates; in humans it is present, but is vestigial and non-functional.

“The VNO contains the cell bodies of sensory neurons which have receptors that detect specific non-volatile (liquid) organic compounds which are conveyed to them from the environment. These compounds emanate from prey, predators, and the compounds called sex pheromones from potential mates. Activation of the VNO triggers an appropriate behavioral response to the presence of one of these three.”

I emphasized that thing about sex pheromones. That’s right. Headbutts is breathing in the smell of estrogen, which is increasing his need to hit something with his head. As I discovered to Blackleg’s misfortune, this apparently works both ways with sheep, that ewes breathe in the smell of testosterone and react with equal violence.

You see, there was this “oops” moment, or rather day, back in late October or early November. Of course, I didn’t write down the date! On that fateful day, whenever it was, a gate that should have remained closed was instead left open, and boys and girls mingled. I didn’t realize what had happened until sunset, when separated them, praying that the boys were too young to have done the deed.

As the days and weeks passed, I went back to idly thinking about bringing in a ram to make more lambs. But every time I’d get close to serious about making the call, I’d catch myself and remember that one day. More to the point, as the weeks passed, my girls continued to expand in that tell-tale way. 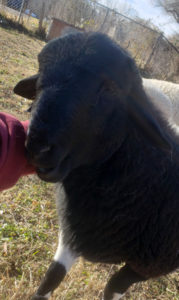 Perhaps it was the need to tie up all of 2019 into a neat little bow, but this past week I found myself determined to get to the bottom of this pregnant/not-pregnant situation. But how to know for sure without calling in a vet and doing a pregnancy test? I decided the best way to test this hypothesis was to put one of the ram lambs in with the girls and see what happened. Given that I wouldn’t have a chance to separate them if one of the girls was in heat, I chose the prettiest and largest of my little guys, Blackleg.

Blackleg is Milly’s son and was born almost two weeks after Rosie’s little girl made her appearance. Despite being the youngest, he’s the largest of the ram lambs, and he’s gorgeous. His head is perfectly proportioned, his chest is broad, he has killer eyelashes and is just a general, all-around pretty guy. He’s also recently become more friendly with me, wanting head pats and chin scratches along with Headbutts and the Albino.

What I thought would happen was that the girls would ignore him–and he them– if they were pregnant. If the girls were open (ready to be pregnant), he’d go for them and they’d be happy to see him. I herded him into the fenced alley ways where the girls spend the night. For an instant, he was startled to find himself separated from his buddies. But there, ahead of them were the six more sheep. At first, he trotted slowly toward them. Then he paused, lifted his head and curled back that upper lip, tasting the air. And he was on the move…going for Rosie’s little girl and Mari’s little girl, who are almost 6 months old and capable, if not ready, of being pregnant.

I cursed myself for an idiot. Why hadn’t I separated the ewe lambs from their mothers?  I rushed forward to see if I could grab Blackleg and prevent a catastrophe.

Tiny beat me to him. Her head lowered to its most damaging angle, she hit him in the side. He fell off Rosie’s girl without satisfying his genetic imperative. As the ewe lambs beat a hasty retreat, guarded by Mari, Blackleg foolishly circled around Tiny, taking in her female aroma, then tried to mount her. She was off like a shot. Blackleg followed with his mother Milly and Rosie on his heels.

The four of them stopped in the farthest alley way. The three ewes surrounded him, their heads down, and began to batter at him. It only took a few hits before Blackleg had lost all of the rosy glaze caused by female pheromones and understood these ewes meant to hurt him. Meanwhile, I’m working my way around three angry sheep, each probably weighing close to 200 pounds, trying to find an opening to rescue the poor guy.

It took what felt like forever but was probably only five minutes before I had Rosie and Milly in their own alley, locked away from Blackleg. Tiny took more convincing. She was set on doing damage to the pretty boy. But with only one ewe after him and now fairly panicked, Blackleg let me push him into another alley. I slammed the handy panel door behind me as Tiny tried to follow.

His chest was heaving. His mouth was open as he panted.  I apologized, then he followed docilely as I led back to his buddies. He was still panting ten minutes later, after the flock of ewes had been reunited.

Well, I think I have my answer. At least three of those girls are pregnant, and I’m really glad I didn’t rent a full-grown, dangerous ram. I’m not sure I would have gotten into the middle of that level of kerfluffle. More to the point, it would have been downright embarrassing to have to return the poor bruised and battered ram with the explanation of “Oops, they were already pregnant.”

Ah, the importance of farm and ranch gates. The rule is always to leave a gate just as you found it. Open should stay open and closed should most definitely stay closed.

I may have lambs in March. Or maybe April. We’ll see.