So, I lost a fortune on YouTube today because I cannot keep my phone/camera on my person.  I blame this phone-avoidance on the fact that my first “real” job was in 1973 as an AT&T LongLines telephone operator. This was back in the day when there were corded plugs and manual switchboards.  (I’ve already admitted that I’m old, but in case you missed it–I’m old :-D)  At any rate, after spending many hours placing calls–some of these calls could take my full work day to complete, say if someone wasn’t home or if, in the case of US military bases, someone had to be located to take the call–to Southeast Asia and Australia, the last thing I wanted to do was spend any more time on the phone.  I often say that email was invented just for me.  I’d much rather type than talk.

So what is this amazing piece of video that you and I missed?  It was Peanut out in the field spending time with his siblings.  Peanut remains about half the size of the other two lambs, but that didn’t stop him from initiating a game of “head butts”.  He lowered his head, backed up with his rear end wiggling in preparation, then launched himself at Mekko’s side–and promptly flew under the larger lamb’s stomach, missing the target completely. Undaunted, he did the same thing to Mari, this time connecting with his startled sister.  But she quickly caught on and the head butting began in earnest.  There was some bouncing and a few sideways leaps before Mama Tiny called to her bigger babies and put the kibosh on the whole game.

This game came about because I’m committed to reintroducing Peanut to his family.  So, since I returned from vacation, I’ve been taking Peanut outside at least three times a day.  There’s more to this than saving myself from cleaning up puddles and other things from my floor.  (More pee outside is always better–I may be investing in disposable diapers even though I’m philosophically opposed to them.)  I want Peanut to be accepted by his rightful flock.  Being new to raising sheep, I figured the best way to make this happen was to take him out and watch the interactions.

The first thing I noticed was that Tiny keeps her new babies on the move.  She grazes for a few minutes and walks, grazes and walks.  If they don’t follow, she calls to them, keeping them with her even if they’ve settled down for a nap.  The only time she lets them rest is while she chewing her cud, or whatever it’s called when sheep rework the contents of their stomachs.  That’s twice a day at about 10 AM and 2 PM.  So, Peanut is now walking out with me as I do my morning chores, then we go out again to work in the garden at the same time his parents and siblings are rotating toward the orchard to clean up after Miss Piggy.  Today, we also walked to my neighbor’s house, then spent time with the workmen who came to do a few things.

The next thing was that Tiny doesn’t allow her twins to suckle for long before she’s pushing them off and moving away.  This caused me to stop allowing Peanut to drink a full 4 ounces at one go.  Instead, I’m limiting him to two ounces a pop, although it means feeding him more often during the day.  Much to my surprise, he doesn’t call or beg to eat at night.  I’m not certain if this is the way it should be or just the way it is because he doesn’t vocalize much. Just in case he’s starving at night, I’m making sure he takes more before bed and gets more first thing in the morning. I noticed today that he’s starting to self-regulate, stopping on his own after a few ounces. I’m guessing his tummy is happier with the smaller amount.

The last thing–probably the most important thing–is that, as I joined the flock with him, Tiny’s and Cinco’s reactions to him changed.  The first day both his parents rudely head butted him away from their bigger children, clearly saying that he wasn’t wanted.  However, in walking with them while Peanut follows me, I seem to have established myself as another ewe in the flock, one with a small but cheerful lamb. Today, Tiny’s head butts were gentle nudges, as if to say “I’m not your mother, it’s that weird looking sheep over there.” Cinco sniffs, then ignores him…UNLESS he thinks Peanut is getting more attention from me than he is.  I’m not quite sure how I got to be Cinco’s favorite–most likely this had to do with food–but I’m sort of glad I am.  It’s uncomfortable walking in front of a ram you can’t trust not to slam into the back of your knees, especially one with horns.  For the record, Dorpers are supposed to be hornless but there are occasional throwbacks to the Hampshire side of their gene pool and Cinco is one of these.  Speaking of which, I need to trim his horns again; they keep trying to grow into his head, something that can happen to sheep. Yuck. 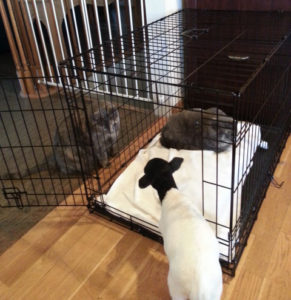 All of this is to say that instead of a post that includes a charming video of lambs at play, you’re getting a photo of Shy Girl glaring at Peanut.  She hasn’t yet forgiven him for yesterday.  I bought a good-sized dog crate to keep him in at night.  To make it comfortable I added a well-worn pillow used by the dogs, both of whom he considers to be his real flockmates, and topped it with his favorite sleeping surface, an equally worn terrycloth towel. Before he even had a chance to try out his new bed, Shy Girl made herself at home, curling up on the far end of the pillow.  For some reason, that enticed Peanut to step into this new, airy room of his.  He curled up on the front of the pillow.  Shy Girl didn’t move a muscle as she glared bullets at this alien intruder into what was obviously a cat space.  Oblivious to the silent feline death threats being hurled his way, Peanut had the audacity to go to sleep.  Foiled,

Shy Girl had to resort to–oh, the horror!–actual physical activity.  She leapt over him and through the crate opening in one bound and beat an embarrassed retreat to my desk chair.  There, she licked herself, her every movement transmitting that it had always been her intention to stay in that crate for just a few moments.

So there you have it.  Life on my farm in a nutshell.  I love it.