First, I want to thank Joel Salatin for (1) being Joel Salatin and driving the cutting edge of the sustainable ag movement.  He’s the one who coined the term “pigerator” and from whom I learned that you could use pigs to do one of the most important farm chores around–rototilling. He’s used his porcine pals for turning the soil in both forest and meadow.  He’s even used them to make compost out of the crusty, layers of mashed wet hay, straw and you-know-what  that’s left in the barn after the cows spent all winter in it. His solution?  Bury kernels of corn between the layers of detritus.  Over the course of the winter the kernels begin to ferment and we all know what fermented corn makes, right?  Well, that’s a pig’s favorite treat.

I may be new to pigs, but I’m already asking myself how I survived 20 years of growing veggies and fruits without gilts/sows as my right-hand girls?  And it just got better.

Last week, I had electric tape trouble.  For some reason, the charge on the tape I’ve run to enclose my upper pasture area disappears about halfway around the pasture.  I’ve cut, tied, re-run, re-checked and run it one more time with the same result.  While I was busy trying to figure out where the tape is shorting, Oinker and Boinker were figuring out that the fence was…OFF!  Whoo-pee!

They were shooting out under the lower tape and racing back to the rear of the turkey barn, which used to be the cow barn.  My irrigation valve back there leaks.  That’s left layers of soggy, decomposing straw, hay, cow poop, turkey poop, chicken poop and who knows what other poop rife with lots of missed oat and barley kernels.  And worms.  Lots and lots of worms.

The girls were in pig heaven.  So were the chickens and turkeys.  All the best bugs with none of the usual work!

By the girls’ third escape, I gave up and ran tape around a good section of the back pasture, which is really just waste because it’s almost completely shaded by cottonwoods, sycamores and four walnuts.  Guess what? I had no trouble getting the charge to make a complete circuit on this new circle of tape.  Ask Oinker.  She tried the fence in three different places, and was sorry she did.  What the heck is going on with that front fence? 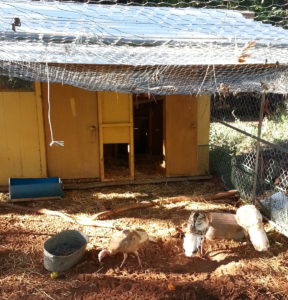 Included in the new pig enclosure is the little yellow turkey coop (the one built to handle my initial 20 turkeys). They love their new home.  I opened the turkey-sized hatch for them their first night and found them snoozing in the dry straw the next, rainy morning.  They came out to check on the food situation, then went back into their little home to laze until the rain quit.  And they are in love with the dirt down there.  Slowly but surely, they’re plowing through the lambs quarters and brittle bush while ignoring the Datura (Loco weed).  They even eat the Goat Head plants!

Heartened by what the girls were doing in the back field, I went to take a look at what they’d left me in the orchard.  I’d noticed last week that the best section of the orchard was cleared.  Three years ago I’d built another of my lasagna gardens on that side of the orchard.  My hope was to smother out the Bermuda and Quack grass that had previously owned the area. It worked for that years, but then I lost control of it by not planting over “The Great Disruption”.  That gave the Quack grass and Bermuda a chance to creep in again. But once the pigs were finished all that was still standing was the Silver Nightshade.

So, armed with my trust Rogue hoe, I started tilling the area that the pigs had been using as their favorite napping spot.  OMG! There is not so much as an inch of Quack Grass rhizome to be found.  Gone are all those prickly, deep rooted weeds and most of the Bermuda. The nut sedge has all been torn loose, if not completely torn free, of beautiful, rich black soil.  The only thing they didn’t eat was the nightshade.  The hoe took care of those in no time.

I’m definitely in love with pigerators!

← Greedy as a pig
Unexpected “Vacation” →