She did it. On Tuesday night at 10:41 PM, Miss Piggy delivered the first of her eight babies. The firstborn piglet was small, black with a vivid white stripe around her middle and hit the straw, broke her enclosing sac then gave a massive squeaky gasp. She immediately wriggled her way around her mother’s back feet, past her teats to Miss Piggy’s snout where she crawled over her mother’s nose and worked her way down to the teats. #1 wasn’t as clever as the others because it took her an hour and a half and the birth of #2 before she figured out teats and sucking.

#2 was pink and white with faded black spots, a color arrangement that a friend tells me is called “blue butt”. Like the other piglets–two more Hampshire-looking black and white girls and four more blue butts, 2 boys, 2 girls–this little girl also hit the ground running. My goodness but they’re active little guys for newborns!

But I’m getting ahead of myself. On Tuesday morning, Miss Piggy was waiting for me at her pen gate–very unusual for a critter who doesn’t like to get up before 10 AM. The instant she saw me, she slammed the gate with her head. The message was clear: “Let me out!”

She immediately went to the turkey brooder coop and I sighed. I knew that’s where she wanted to have her piglets and her insistence on getting there at that very moment pretty much told me Tuesday was the day. Of course it was.  Tuesday was the day I’d scheduled to repair/prepare the coop, knowing she wanted to use it. The repairs were vital. Over the course of the past four months the wind has shut that coop door on Miss Piggy at least four times, locking her inside. Not that a closed door was any barrier to her.  No, she simply pulled up whatever chain link panel she chose to use as a door and departed. Two of the walls were completely ravaged.

There was no way I could let her have her babies in an unsecured coop. So, while she made herself at home inside the coop, creating a great big nest of straw, I dragged over those six-foot handy panels and a couple gate choices, then went to the barn for my new go-to building supply: u-bolts. Those things are good for whatever fencing wire doesn’t hold!

In a few hours the broken chain link was no more and the walls were far less vulnerable to snouts. Not that I didn’t see right away that the lower rows of squares on the handy panels, the two rows that are supposedly chicken-proof (ha!), were big enough to let out a piglet. There’s work still to be done, and it needs to be done soon.

As I was rebuilding the pen, Miss Piggy began to pace in agitation. She tossed her food bin, not once but twice. Then she tried to toss her water trough. That one confounded her, mostly because the food-grade plastic trough twisted as she tried to lift one end. I couldn’t help but laugh at that. Even at my age I can remember labor. Sure wished I’d thought to toss a few things way back when. By dusk I was tired and went in for dinner. I figured I had until the next morning before the babies made their appearance and was looking forward to a good night’s sleep. Then I googled that throwing thing. I found an extension publication that told me sows start tossing stuff three to four hours before delivering the first piglet. Another page informed me that sows deliver every 15 minutes after the first piglet appears. Then, an email from a friend suggested there’d be little ones by 5 AM.

After that, I was resigned to me fate.  Since it was now six hours after she’d tossed her troughs, I knew I was going to be up all night. Dressing warmly, I packed my pillow and blankets, a battery-powered light and a stack of towels and drove down to the newly reinforced pen. I wasn’t inside those airy walls for more than ten minutes before the first piglet appeared.

And then the real work began. She grunted, I stroked and reassured. She quivered, shivered and shifted. I stroked, encouraged and reassured. Her eyes were shut as she worked. Out the little ones came, but not at that easy 15 minute interval that would have had me in bed by 2. No, the intervals stretched to an hour and a half.

Then, at around 1:30 AM, she went still on me, barely breathing. Her first three piglets had gotten a hold on that teat situation with those sharp little teeth of theirs and were now happily suckling. Memories of Dixie and Brighty as they dropped to the sudden calcium deficiency of Milk Fever raced through me. Instantly, I reached up and felt the tips of her ears. Cold! Her snout was cold as well.

Certain I was seeing Milk Fever again, I rushed to the truck, drove back to the house and brought down the bolus syringe and the Apple Cider Vinegar. For the next half an hour I bolused (okay, that’s probably not a verb) a water/apple cider vinegar solution into her. She was grunting and shifting again by 2 AM. In the next hour she pushed out two more little guys, bringing the total to five.

By then, we were both exhausted. I told her that she’d gotten the hang of it, that she didn’t need me any more and I was going to bed. She looked up at me. I swear, the expression in her eyes said “Bed! Good idea. I’m going to sleep too.” I left, slept for a few hours and did my usual chores at 5 and checked in on her. I found a sleeping Miss Piggy with the same five babies I’d left her with snuggled against her.

That made me worry. If five was all she was going to have, then she should have dropped her placentae. Sows have two, one for each side of her body, each placenta filled with a number of little piglets. But, being so tired at 5 that I felt ill, I returned to bed and woke up at 10 AM. I fixed myself a cup of tea then went down to check on the new mom. Five minutes later, as I sat on a bale of straw watching, she gave up #6. By noon, all eight had made their way into the world and she dropped one placenta. She waited until after 4 PM and the arrival of Diana, the woman who’d helped me with the AI, to drop her second placenta.

Except for that Milk Fever scare and Miss Piggy’s determination to keep to her own delivery schedule, this animal midwifing experience was as easy as when Elsie gave birth to Hannah. All eight of the piglets came out healthy, vigorous and determined to claim a teat. Momma Piggy didn’t once come close to squashing one of them, not even when shifting positions as her labor demanded. 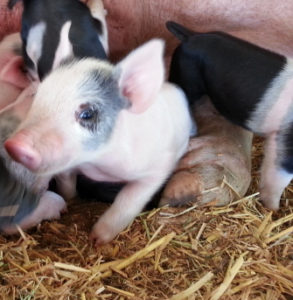 Best of all, sucking up to her for the previous 3 months, 3 weeks, 3 days worked. She has no trouble with me being close to or handling her piglets. She definitely reacts to their frightened squeals, but I can see by the way she watches, that she’s assessing what I’m doing, and not giving way to panic or the urge to attack.

Yep, all is right on the farm today! And OMG are they cute!