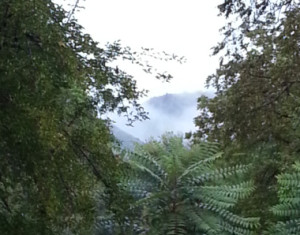 Pluviophile: noun, someone who loves the rain, who finds joy and peace of mind on rainy days.

Many thanks to my friend and fellow author Christine Eaton Jones for posting this definition today on Facebook.  I am definitely a Pluviophile.  When I woke up this morning and discovered it was raining–not an Arizona downpour but more of a steady Dutch sprinkle (goedje weer voor een eend or good weather for a duck), I was thrilled.  Outside, the clouds have lowered until they’re cloaking the hills that surround me in wispy mist.Of course, the turkeys and cows are less enthusiastic about the wet than I am, but that’s their problem.  I’m hoping it rains all day so I can have hot chocolate while I see what Sir Faucon and Brother Edmund are up to in the new mystery I’m writing.  Best of all, there’ll be soup for dinner.  Frankly, if I could move this farm (and Oak Creek) to Seattle, I’d do it.  Since I can’t I’ll take my pluvial joy when I can get it.

Unlike folks who suffer from SAD (Seasonal Affective Disorder), especially if those people have the misfortune to live in Holland or Illinois where the sun stays hidden for more than 200 days a year, I love gray days.  Then again, I live in Arizona where the sun beats relentlessly down at least 340 days a year.

As with everything, there are consequences to encouraging the rain out here on the farm, and it mostly has to do with the creek.  A good rain in Flagstaff or Sedona can significantly raise the water level.  Last spring when the “great flood” hit, the water came well up onto what the county calls “the flood fringe”, almost pulling down my perimeter fence.  That was water ten feet deep and moving at an incredible speed.  In fact, it was moving so fast and was so high it hardly looked like it was moving at all.  It was only as I watched it carry off a 20 foot length of a 3 foot diameter cottonwood trunk (bye-bye oyster mushrooms!) that had been laying next to my fence when I moved in that I realized just how powerful the creek had become.  Needless to say, I was suddenly wondering if I would have to bring the cows to the upper terrace where the house is–6 feet out of the flood fringe or so I’m told–but how the heck was I going to herd the turkeys up here? 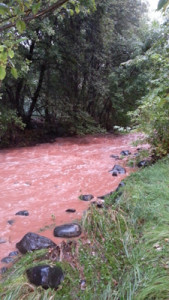 rning after releasing the animals from their corrals and coops, I went down to check on the creek.  Yep, it’s Willy Wonka brown and moving fast.  But it hasn’t risen much yet, and it may not.  That previous flood shifted the creek’s path, moving it to the other side of the “island” that stands between me and my neighbors on Willow Point Road.

Good and bad, I suppose.The good is that I don’t have to worry about moving animals in the muck.  The bad has to do with the tons and tons of wood that previous floods have deposited at at the far end of the property.  I’ve started moving the branches and trunks down to the creek-side terrace where there’s nothing but rock.  Eventually I ‘ll set it on fire and be rid of it at last.  Yes, I have burn permit and, in case you’re concerned, burning wood on your own property is considered carbon-neutral.  It’ll be quite the bonfire.  But you know what would have been easier?  If I’d gotten all that wood moved down there last year, and this year’s flood had carried it away. Nt going to happen now that the creek is diverted.

But that’s a concern for another day.  Today, I’m grinning in the rain.