When I moved up here from Scottsdale (where else does a farmer come from?) I left behind a gorgeous backyard that included a recirculating pond with a bio-filter. Every morning, I’d get up, make tea, then go sit on my porch swing and listen to the trickle of water through an artificial stream. Here, I take my tea out onto my porch and listen to the tumble of much more water through the Mason Ditch. Not so much Oak Creek. The water in the creek is really low this year.

Although the Mason Ditch was once an equally artificial channel, after almost a hundred and fifty years of flowing water it qualifies as a bona fide stream. Mussels, crayfish, minnows, and trout and make homes in the water, while on my property alders, ash, cottonwoods, mulberries, hackberries and blackberries line the banks. I’ve even found a riparian orchid living with its feet almost in the water.

Even with all that water chuckling its way past me, I missed having a pond, especially during the ten day period when Page Springs goes down for maintenance. That’s my “dry season”. Because I haven’t gotten around to drilling a well, when the spring is dry, the only water I can use for my livestock is what’s stored in my irrigation pipes. Thinking a stock pond was the answer, a hole in the earth was created. Because I wanted a natural pond and not a swimming pool, it was lined with bentonite clay, which is supposed to create a waterproof coating. Not so much. Without a frequent recharge from the hose, the pond dries up pretty quickly, which is kind of strange in a place where the water level is likely at about ten feet. 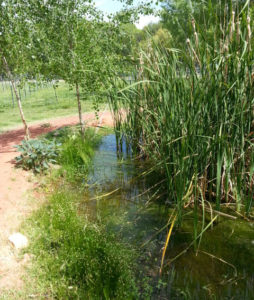 Of course I couldn’t leave it a simple hole in the earth surrounded by dusty red gravel. I had to give nature a boost. Because the sides were so steep, I dragged in some old logs to give it more of an edge. It turns out this was vital. The bentonite may not stop the leaking, but it’s eats shoes like nobody’s business. On those occasions when I’ve allowed the water level to get too low, I’ve had everything from turkey babies to lambs get stuck in the goo, and I’ve lost footwear going in to save them.

Once my makeshift bank was in place, I made a foray down to Oak Creek where I borrowed some cattails, horsetails, Oak Creek peppermint (someone along the creek planted peppermint too close to the water and it’s done what peppermint always does–gone crazy), some frondy thing, pennywort and watercress. I also added a couple of tiny cottonwood volunteers. I put them right into that dry gravel edge without so much as a drink. They’re now taller than me. From the much more civilized pond at Quiet Valley Ranch down the road, I harvested some sort of water grass and water lilies. The lilies bloomed once, then I got pigs and discovered that pigs love ponds and they think water lilies are delicious. Dang.

For a long while all I saw in the pond was dragonflies and their bigger cousin, the darners. There weren’t even any crayfish. This might be because the Great Blue Herons were eating them, but I don’t think so. Even herons get stuck in the gooey bottom.

It may have been the pig action that changed things. Perhaps they churned up the bottom, sending seeds and starts moving here and there. This year I have plantain, strawberry clover, white clover and nutsedge crowding along the water’s edge. The water grass has gone crazy and now nearly covers the bottom of the pond. Last year, the cattails bloomed for the first time and this year I had red-winged blackbirds with their flinty, metallic call appear to eat them.

What surprised me most was the appearance of bullfrogs. The moment it warmed up this year, there were tadpoles galore. Now, a bullfrog might be considered a nuisance elsewhere. Not here. Here, they’re a delicacy. I’ll catch that deep bass croak for a night or two, then its gone. I’m not sure if it’s a heron or Moosie, but something’s eating them.

But again today, there were more tadpoles. Here on the farm, when froggie goes a-courtin’, he’s the only one making noise. Mama frog has figured out she needs to keep her mouth shut.