It’s a lame title but that’s because I can’t use “Still No Lambs” twice.

I don’t know what to do with that ovine girl!  She isn’t in any distress so I’m still willing to wait (im)patiently for the big event.  My worry now is that the longer she goes, the bigger those lambs get and the more dangerous the birthing experience is.  Ah well, I’m on the ride and there’s no getting off now, so I’m willing to let things run their course and move on to other successes.

I have thirty new babies!  The Brahma chicks arrived last Friday.  The picture showed them as sort of golden speckled birds but these babies are mostly black with hints of yellow.  I’m hoping they mellow out to something less dark.  Then again, I won’t have too much trouble telling them apart from my remaining eight girls.  Brahmas are called Brahmas because they’re big.  They should be nine pounds full grown.  They’re also said to be calm and rarely broody and lay a big brown egg,  My existing chickens include one Rhode Island Red, two all black pudgy Australorps (they escaped on slaughtering day because Moosie opened the chicken coop door to see what I was doing), and five small, stringy, excitable black Australorp/Jungle Fowl hybrids. The eggs I’m getting from them are more ivory than brown and five out of the six being laid are small.  (Guess which birds are laying and why I slaughtered.)

Getting chicks in the mail is one of the most interesting things about being a farmer.  It’s hard to imagine boxing up these bits of fluff for a two day jaunt across the country, but that’s how they come.  It gives new meaning to running out to pick up a box of peeps.  The only reason this works is because chicks are born with a two day internal reserve.  This is because when a hen sits on eggs, each egg hatches in its own time (sort of like lambs being born–no lamb before its time). The first babies born will likely have to wait a day or two, or even three for peep number ten to make its entrance into the world.  But Mama won’t wait forever.  After day three she’ll take her living chicks and leave the rest of the eggs, even if babies are still hatching.  That’s when I really appreciate a broody girl.  Two years ago I used a broody bantam cochin hen to hatch out almost a dozen turkeys.  After each turkey hen left her nest, I’d check to each abandoned egg, listening for peeping.  If there were sounds, I’d slide that egg under the cochin and she’d hatch them out, one by one.  She didn’t seem to care about them after they hatched.  I think she was just sitting for the pure joy of sitting.  Unfortunately, a hawk took her.

Since I’m starting all new in the chicken department, I decide to try a new brooder setup.  A few weeks back I bought a used cast iron claw-footed tub from a local antique store with the intention of using for the next time I slaughter pigs, but when I got the tub home, I realized it was the perfect brooder.  There are no square corners where a chick can get caught behind the press of little bodies and suffocate, the sides are high enough to adjust the heat lights and the top is wide enough that it’s easy to change the food and water.  I filled the bottom with fresh dirt, added a few bugs for interest and put in the food and water, then made the most important piece of equipment–the cat-proof top: reclaimed hardware cloth in a square frame with a handle so I can lift it off.

So far, the brooder has worked great and I’ve only lost one chick due to an epidemic of pasty

butt.  This is a real thing and it’s really called pasty butt and I really have spent two nights checking every chick for dried poop stuck to its little rear end.  I added more Braggs Apple Cider Vinegar to their water and everything seems to be moving properly now.

Then I decided to build these new babies an outside pen and temporary coop.  They need fresh air and grass, and my barnside garden needs work. Note that I use the word “build” casually as I don’t really build anything.  I screw together pallets because they make a square and start stapling things to them.  This makeshift coop is definitely my masterwork, or will be when I finish it in a day or so.  Not only are the pallets screwed together well (Derek just stood on top of the cube and it didn’t collapse), I actually insulated the interior so the new babies will stay cozy.  They’re going to start with a chicken wire run that follows the barn wall, but as they get older I’m going to widen their horizons and let them explore the whole garden area.  Hopefully, they’ll make a dent in the cabbage loopers and sow bugs. Now onto the really important stuff.

THE PUMP HOUSE HAS BEEN REBUILT! 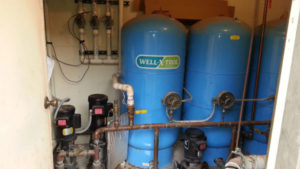 I can’t tell you how excited I am about this. (Who in their right mind gets excited about a pump house? Seriously!)

The pump house needed to be rebuilt when I first arrived here, but the ex wouldn’t hear of it.  Why?  Who knows?  So for the last six years I’ve been saddled with massive thirty-year-old sand filters that would use more than 200 gallons of water to backwash, two broken pressure tanks out of three (complete with packrats living under them), 1 rebuilt boost pump and 1 boost pump barely limping along and a spring pickup pump that was never intended to be a spring pickup pump.  It was costing me about $200 a month in electricity to get water into the house.  So much for “free” spring water.

And now?  Hoky Smokes, Bullwinkle!  Two energy efficient pumps took the place of the other four.  A tiny sand separator now does the job of the two old filters with help from a small water filter.  I still have the arsenic filters and a charcoal filter, and the UV lights (they take the place of chlorine in the system), which are finally working the way they should.  And all of this was achieved for less than a tenth of what someone long ago suggested it would cost to do the rebuild.