Firstly, I apologize for missing last week. Technology on the Farm got squirrely prior to the big weekend, and then got worse. By Sunday we had radio, tv, telephone, and internet silence. There we stayed until Wednesday. I thought I’d be able to write one after we were up again, but that was wishful thinking. My days are so full, there was no time for a catch-up blog post.

Now, onto my ‘scape artist rabbits. It’s not that these bunnies are particularly smart. No, it’s that cute little PVC coop I like so much. It just can’t hold my rabbits.

Yesterday evening, on my final round of the day when I double-check that everyone is settled for the night, I stopped at the baby bunny coop, lifted the corrugated top only to stare down in shock. An hour earlier there’d been four little bunnies. Now there were two. I swiftly scanned the coop, looking for evidence of how the two escapees had hopped the coop. There was no torn plastic chicken wire and its edges were still neatly tucked under the pvc frame. That nothing was out of place brought me down onto my knees for a closer look. Only then did I see it, a tiny mound of dirt. Under that was an equally tiny escape tunnel. I hadn’t noticed their efforts because these guys are still very little as is their tunnel. Moreover, the coop sat in deep grass that very nicely hid all signs of their evil plan.

Coming back to my feet, I swiftly scanned the grassy area between the garden and the brooder coop. I’d had a rabbit escape a few days earlier, one caused by a twist in that pliable chicken wire that had left a small gap. The little guy who managed to exit hadn’t fled for parts unknown. Instead, it traveled slowly around the area, moving from coop to coop as if to introduce itself to my other incarcerated animals. I caught up to it as it paused to study the day-old chicks in the brooder coop.

Twenty barred rocks chicks plus one “surprise” chick (which appears to be a feather-footed cochin of some kind) arrived on the farm on Friday. Like the Cornish Crosses that arrived a month ago (and already look like they’re four months old), these bits of fluff have proved incredibly healthy. None of them died during their journey and pasty butt has come and gone with no ill effects.

As I reached the brooder coop, the rabbit said goodbye to the chicks, then hopped slowly past the ducks, who watched both of us in suspicious silence. That’s when it realized I was behind it. Turning, it looked up at me as if to say, “Oh, there you are.” I picked it up and took it home to its siblings.

But this time there was no sign of the two bunnies anywhere in the yard. There was no flick of a white tail, no up and down movement of a gray butt through the sea of green. It was well into twilight now and I know two Great Horned Owls hunt the property at night. They sit on the house roof from time to time and talk to each other. I sighed, and chalked the loss of two rabbits up to a coop that was a monumental failure. With nowhere else to put the remaining two bunnies, all I could do was  cross my fingers and move the coop to prevent additional use of whatever escape method the first two had discovered.

This morning I still had two bunnies in that coop, which was a relief, but no bunnies outside the coop, wanting to come home. I was certain that meant they were gone, especially since Radha had managed to escape the pastures and her sheep last night to sleep on the porch. This is because Bear no longer spends his nights in the pasture. My big, beautiful boy is slowly approaching his end, and I’ve been keeping him on the porch. While Radha was on the porch, looking guilty I might mention, her chew toy was still down in the pasture. The wrong pasture.

That had me scratching my head as I rescued Rupert. He followed me until we passed the garden, then put his nose to the ground and started circling the coops. This is not unusual as he’ll eat anything closely related to chicken or rabbit food. But when he wasn’t at my side as I started up for the house where his doggie breakfast waited, I turned to look for him. There he was, standing in front of the barn. About three feet from him was a perfectly whole and safe baby bunny. The rabbit looked up at the terrier, then calmly hopped into the barn through the gap I leave to let the barn cats come and go. 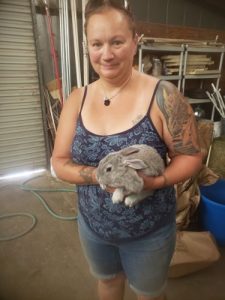 Gotcha! I raced down to the barn. With Rupert whining in complaint, I rushed inside and pulled the big barn door completely shut. The trapped rabbit was now calmly exploring the barn. Must have been the same miscreant who dug the tiny tunnel. I spread a handful of rabbit food on the floor near it. The bunny immediately started toward the food.

Sucker. An instant later, with the rabbit in my firm grasp, I turned for the smaller barn door. From the corner of my eye I caught a flash of white. Sure enough, it was bunny #2, aiming for the alfalfa.

Unlike the first, calm bunny, it took Christina and I, along with a flashlight and some serious moving of stakes, tiles, and leftover grout, to run that one to the ground. As of a half an hour ago, all four were cuddled in the coop, nibbling on broccoli flowers.

It’s definitely time for Plan B. I only hope I can come up with one.