It turns out Bitsy wasn’t pregnant. This confounded Christina, who was certain she’d felt little bunny babies in Bitsy’s belly. (Say that three times fast!) With an eye on the temperature, we put Bitsy in with Buddy three days ago. This is because Spring lasted a nanosecond here and we’re now in mid-Summer with temperatures daily reaching above 90. It seems that rabbit bucks go sterile at 95 degrees, Oddly, so do tomato flowers, whatever that means. But morning temperatures are still pleasantly chilly, reaching down to the high 40s.

I don’t know if that means anything. Does a buck simple snap back into virility when it gets a little cooler or does the weather have to stay cool for a week or two to restore fertility? Temperatures not withstanding, Buddy only managed to “fall off” Bitsy twice. That book of mine says you need three “fall offs” to guarantee impregnation. I guess I won’t know until the last day of May, which would be her due date if Buddy managed his end of the process. 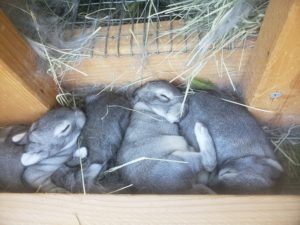 As for Babs, she seems to have taken a dislike to one of her little ones. While the other three are pudgy, little Number 4 is thin. When Number 4 tries to wriggle his/her way under Mama to nurse, Babs invariably moves away. Let me say that while 4 may be thin compared to her siblings, she’s definitely vigorous. They all are. Every day and with their eyes not yet open, these little guys wriggle their way from the back of Babs’ coop to pile together on the grass.

This may be the result of the heat. It could be just too hot in that rabbit fur-lined straw burrow of theirs, while the ground is cool and moist. Whatever the reason, they make out there every day, which gives me an excuse to pick them up. Lordy, but they’re cute!

Which brings me to the turkey poults. They are not cute, but then turkey babies are never really cute, not like chicks. Their beaks are too long and so are their legs. But in this case I don’t care about cute. I care about alive. 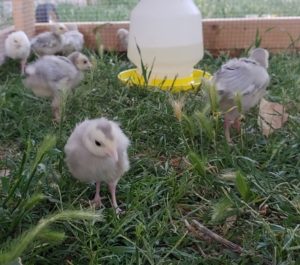 After consulting with my wise turkey-farming friend Lu, we came to the conclusion that the 8 dead poults all died of “starve off.” This is a condition that strikes some of the Heritage breeds, probably because of how they’re being bred as the breed is being restored. In the case of my little ones, their gizzards weren’t working properly and they ended up starving to death even while they were eating.

Although I’ve raised both Narragansetts and Royal Palms, and that mix of breeds that gave me Tom, who is some sort of hybrid of a Bourbon Red, I’ve never before seen this. Or maybe I have seen it, but didn’t recognize it because I had turkey hens to do all the caretaking. I’ve certainly seen poults weaken and die over the years, but never half of the hatch out.

I was down to eight healthy, happy poults when one managed to sniggle its way out of the turkey coop and ended up as a dog toy. With just seven left, I’m now thinking about keeping two to breed for next year, mostly to recoup the cost of these birds. That’s what I get for purchasing pretty rather than buying for purpose.

And achieving purpose brings me to my gardens. I’ve spent a huge amount of time with my hands in the dirt this past week. Those old seeds I planted have proved far more prolific than Buddy the Bunny. The beets are delicious! I’ve made my first batch of Beet Kvass with them and it’s ambrosia! Well, ambrosia if you like the dirt flavor of beets, which I do. We’ve had fava beans and peas with chard. I’ve used beet greens in omelets. Today it was black-eyed peas with fennel, carrots and kale from the garden, along with a bit of onion and Andouille sausage. 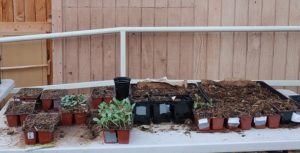 But it’s been the amazing number of old melon seeds that have sprouted that has me running in circles at the moment. All the Hopi watermelons and something called Allsweet watermelon sprouted. I think I got fifty plants from an old package of Italian Muskmelon seeds. There are easily thirty Gallia melon starts and an old package of pickling cucumbers has overfilled its tiny planter.

So much unexpected abundance has Christina and me tearing through my disused garden plots as we try to find space for them all. Thank heavens for the broad fork! When you absolutely, positively have to turn the earth, the broad fork is your friend. Weeds and bermuda grass has been removed. Garden steps have been relocated. I have muskmelons planted under the Pakistani mulberries. Both sets of watermelon sprouts went under the new English Chestnut tree that I put in the center of the old Hugel. Yes, I know I shouldn’t put them together, but I still have to find space for the cukes and the Gallias!

Argh! I’m driving myself crazy because I can’t stand to let a living plant die, especially one that is defying the odds. Then again, if even half of them live, imagine just how sweet my summer is going to be!

← Locked in ’til Lunch
Teen Rabbits →