The time has come the Walrus said to speak of many things,
Of ships and string and sealing wax, of cabbages and Chins…

Yes, I’m borrowing from Lewis Carroll’s Alice in Wonderland, but that snippet is the only piece of poetry (if that’s poetry) that I know, and I kept repeating it today, “Chins” being the way I was saying the shortened breed name for my new rabbits. 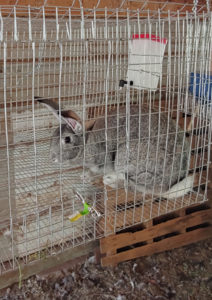 Three American Chinchillas, a largish, very pretty, lush-furred gray rabbit, arrived yesterday. This breed is on the “critically endangered” list according to Wikipedia. They came to me from Peoria (Arizona, not Illinois) via new friends, who have a rabbitry in the Rimrock/Camp Verde area.

I’ve been working toward this moment ever since the puppies arrived. With four dogs eating bones and raw meat I needed a new meat source that was even faster growing than sheep. It occurred to me that rabbits might fit this bill. I mean, they breed like…rabbits, right? So I did what I always do before taking on a new animal. I bought a book about raising rabbits, one used by millions (or so it claims) to set up their own rabbitries.

I keep using that word– rabbitry– because I’m in love with it. It has a very Medieval feel:  rabbitry, piggery, apiary. I wouldn’t be surprised if in one of my future mysteries a character shows up who’s raising rabbits in a rabbitry, only I’m pretty sure no one kept rabbits in 12th Century England.

Actually, the book was great and included every bit of information I needed to know. Like the fact that bucks (male rabbits) are sterile when the temperature rises above 90 degrees and that you always bring the does (female rabbits) into the buck’s cage for mating or you’ll have a dead buck. Yikes! And they look so sweet and innocent. There were also instructions on where to keep your rabbits, how to minimize care by making sure the manure drops where you want it instead of all over the place, that rabbit manure is the best garden amendment ever and can be used for a worm farm, as well as step-by-step instructions on how to build your own rabbit cages.

Which of course, I had to try. I recruited Christina to help. Our first cage didn’t quite have square corners and somehow the roof ended up a little too big. The second cage was a huge improvement on the first, but that third cage…wow! By then Christina had fallen in love with J-clips and the J-clip fastener. As I held the welded wire panels together. she went “snip, snip, snip” fastening it into a finished cage. 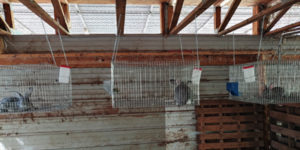 At first I thought I would put the rabbits into the open area in my back barn, where the cow stalls used to be. But as I tested that area over a few weeks (recommended by the book), I discovered it was surprisingly airless in that open area, even when there was a strong breeze blowing. So I walked around the corner and into the alcove beneath what used to be the hayloft. Hah, so that’s why the sheep always rest in this space!

For whatever reason the lower ceiling there creates an air draw. It can be over a 100 degrees 10 yards away and a pleasant, breezy 90 in that alcove. What was even better is that the trusses supporting the loft are exposed. The more I looked, the more possible hanging the cages from the trusses became. That, I was sure, would keep the rabbits Moosie- and puppy-proof, not to mention fox- and raccoon-proof.

So, knowing the rabbits were coming Sunday, by Saturday I had three empty rabbit cages hanging from the trusses, complete with feeders and waterers. I’d purchased some rabbit pellets but I didn’t buy hay, thinking that the rabbit pellets were enough. Jill was kind enough to bring me some alfalfa as I transition these three bunnies onto pellets. She also came armed with good ideas, among which included my next project–building artificial rabbit nests. That’s because once the does are pregnant, they need a facsimile of a burrow in which to kindle.

Yes, when mama bunnies have babies they are said to kindle. Is that not the perfect word for my life, as I make my living selling books for the Kindle? Did Amazon know this meaning of the word they used as a name for their digital reader? And if they did, I’d really like to meet the guy who suggested it as he’s got a really quirky sense of humor.

Jill suggested making a nest box that hangs beneath the rabbit cage, almost like a real burrow. She also warned me not to expect much from these young does with their first litter. Kind of like making pancakes, that first one is never quite right.

I was okay with that. I knew I’d be happy if I 1) managed to arrange it so the girls pregnant–exactly how do you know if a rabbit is in heat?–and 2) that the new moms come safely through kindling. If and when that happened, I’d have a month to build a rabbit tractor, so I can keep these new babies out on pasture until dog food day comes.

By Monday morning, I realized I’d been betting on the come. I didn’t make it through a full twenty-four hours without one full blown catastrophe in my foray into raising “mini-livestock.”

The first threat wasn’t unexpected. As we carried the three rabbits from the house down to their new homes in the back barn, Moosie walked right next to the cage, his nose going a mile a minute. He LOVES rabbits. They run, they’re soft and furry, and they taste good. Once we reached the alcove, Moosie sat and watched as we put each rabbit into its cage. Jill watched rabbits for a moment then reported that– despite the fact that their most serious predator was drooling as he watched them– they were quickly calming down, which was a very good sign. We chatted for a bit, then we all went on our way and Moosie came with me to the house. I thought it wise to keep him locked away from the new bunnies.

The next time I went down to check on them, I took the puppies and Bear (and Moosie, who would not be left behind). The puppies had seen the cages go in but had paid no attention. I was very curious and a little worried about how they might react.

As it turned out Radha was completely freaked out by the alien beings now occupying what had been empty cages yesterday. She stood about ten feet from the alcove and barked. When a rabbit would so much as shift, she’d race backward in an amazing display of complete cowardice, then inch forward again to bark. Quiet Kali stood behind Radha, watching as Moosie did his best to stand on his hind legs and reach those cages. Then, gathering her courage, she slunk closer, put her nose up toward the rabbits, only to retreat rapidly until she was once again behind Radha.

Bear discovered that the bottoms of the rabbit cages are just above the top of his head. He moved from cage to cage and sniffed each rabbit, then walked away. For some reason, watching Bear greet them changed everything with the pups. The next thing I knew they trying every which way to meet these weird creatures. That made the sheep curious and they came into alcove and crowded beneath the cages. Once they lost interest, the chickens did a meet-and-greet. Chicken after chicken flew up, perching next to the closest rabbit, staring at her through the chain link that separates their coop from her cage.

Of all the animals that stuck their noses in toward the rabbits, I think the chickens worried them the most.

The last time I looked at them Sunday night, they were quiet and calm. This morning I hurried down to check and my heart fell. While both girls were alert and watching me, the buck had died. I suspect he was done in by all the travel and changes. As awful as that is, I’m sort of grateful. This will give me a few more weeks to practice keeping rabbits before I have to get serious about breeding them.  I’ve already discovered that the girls have very different personalities. One is quiet and a little shy while the other thinks it’s hilarious to spill her water.