I can’t help myself.  I’m old enough to remember the Mr. Magoo version of “A Christmas Carol”.  So every time I go out to pick raspberries, out of the back of my mind comes the phrase “and razzleberry dressing!”  Which, when I think about it, doesn’t sound good at all.  Now, cranberry dressing…well, that’s a different story.

I have to say that this year’s raspberries are definitely razzle-dazzle, especially considering I’ve done nothing to them.  The plants doing the best are under the walnut bush.  I’m sure it started as a tree, but as time and neglect went on it either died or fell.  Then, when I started watering the hillside, it re-sprouted from what remained of the trunk.  Since then, I’ve been working on turning into something more like a tree than a bush.  The point of all that is NOTHING should be under the walnut tree.  It’s a walnut, and walnuts, as well as sunflowers, are allelopathic.  That’s a plant that adds a bit of a toxin to the soil to guarantee it has no competition for nutrients.  Life being life, certain other plants have found a way to build an immunity to that toxin.  Apparently, raspberries are among this group.  I know that the hackberry is, so maybe it’s a berry thing. 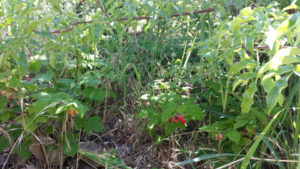 Right now the raspberry hillside looks like a wreck, but there’s something to be said for the sheer abundance of it all. The quack grass is coming on strong and the rains have caused some dirt slides, making it hard to walk on the edge to the wall.  (I used to be afraid of heights, then I came here and everything is on a hillside; I’ve gotten used to being a mountain goat.)  The peach trees are bending, there’s so much fruit on them, and I haven’t yet had time to thin them.  The Egyptian walking onions have spread themselves beneath the quack grass so that when I’m not careful about where I step the smell of crushed onion greens fills the air. Of the four Mexican Elderberry I planted two years ago, one had become a tree while the other three are moving rapidly in that direction. The only thing I don’t yet see are the Blue Lake Pole Beans that I seeded in about 3 years ago and have come back without fail.  Now that’s a tasty dried bean!

I’ve lost my tiny little olive trees because I didn’t winterize last winter, but that’s okay.  I think I’d rather have figs instead.  I planted two figs next to the cement wall that holds up the raspberry hillside, and they’ve done beautifully, albeit without producing a single fruit yet. Then again, I don’t know what variety they are and they seem very healthy, so I’m content to leave them be and see what happens.  However, my new figs will be Kadotas.  Now those are tasty!

As for the raspberri 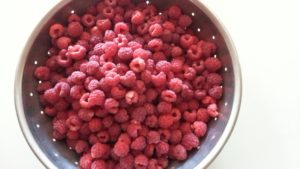 es, they’re an ever-bearing variety, so I’ll be harvesting all summer.  I got about a fourth of the hillside harvested yesterday morning, and this is what I came in with (about 2 pounds).  I see Raspberry Shrub/Vinegar in my future!  That, and I bought this great Rousanne from Page Springs Cellars as part of celebrating finishing the book.  I think around 7 PM tonight, after it’s cooled down a little, I’ll throw a handful of razzle into my wine glass and top it with some dazzle. Porch wine time!