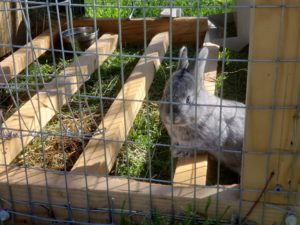 Before I bounce into talking about the home we’ve built for my soon-to-arrive turkey babies, we need to do a bunny update. Why? Because they’re unbearable cute and I can’t help myself. Perhaps it’s the breed. American Chinchilla rabbits have gorgeous plush gray fur and very round faces and ears with pink linings. Or maybe it’s that these little guys seem completely unafraid of the world around them, so much so that they’ve been going nose-to-nose with the dogs through the hutch wire.

Much to my surprise, Radha treats them as if she either doesn’t recognize them as potential prey or (and this is the one I’d like to vote for) she’s adding them to the species of farm animals that she’s supposed to guard. If that’s the case, then what she’s going to be guarding them against is the pair of Peregrine falcons. These two (beautiful) birds have been appearing in the Cottonwood trees that edge the orchard where the bunnies live. They sit in the lower branches and watch the rabbits and the half-grown chicks that live in the chicken tractor I built two years ago. 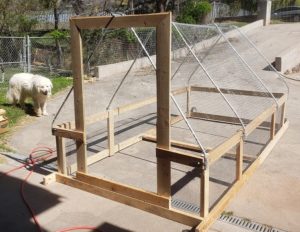 And that neatly brings me to today’s subject which a new and improved version of the Farm on Oak Creek’s mobile poultry housing.  But maybe it should about my new and improved building skills because (drum roll, please) ALL THE CORNERS ON THIS NEW COOP ARE SQUARE! Ta-da!

Oh yeah, and it cost almost nothing to build. The only thing I’ve had to buy was the chicken wire for the outside. All the lumber is recycled. My favorite kind of project!

With the turkey poults expected to arrive in two weeks, Christina and I started the new coop Saturday morning. We kicked bee-hind. Everything was finished this afternoon except for the door. That’s unbelievable. No, that’s miraculous, especially where square corners and I are concerned.

The only thing that slowed us down was making the lapped joints. In my first chicken tractor, I ended up using the sawsall and a chisel to make them, a very time-consuming task, not to mention tough on my shoulder with the sawsall shaking my bones loose. This time, I started with the sawsall, but after a few long moments Christina suggested we try the Dremel, hoping for quicker results. When that didn’t work, we tried the circular saw. No matter what we used, I still needed to chisel the cut surface and corner until it was smooth.

That’s when Christina said, “Forget this. I’m getting the chain saw.”

Yes, she’s that good with a chain saw. I outlined the area to be removed then put in the first cut to depth so she had a guide. Two minutes later, she had the wood shaped and the surface smoothed. Perfect!

What we lack in skill we make up for with ingenuity. This has made us both better– um, I can’t use the word “carpenters” because we’re not even close to that.  Let’s just say we’re twice as capable around tools as we were when we started working together.

The only reason the turkey tractor isn’t finished today is that I’m not happy with the door frame. I want to take a night to rethink it, and that has me grinning. It’s unbelievable that I think I know enough about building stuff to rethink anything. But here’s hoping I do and that we’ll double our capabilities again with the next project because we really need to master that pipe bender.

← New Home for the Bunnies
Mushrooms and Messengers →

2 Responses to Ready for Poults