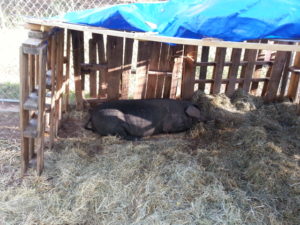 “Really?!” I said, my head tilted up to the gorgeous blue sky on Thursday morning. I was limping again, having tweaked a tendon even though I don’t recall stepping wrong. I was standing near the pig shelter. Stretched out in front of me was my favorite piggy girl, the one who showed belly every time I got close. She was on her side, looking miserable and making pitiful little grunts.

The previous day this big girl hadn’t joined the usual feeding frenzy and had instead waited before she got up. Rather than following her sisters into the pasture, she went to lay in the sun near the pond. When she hadn’t moved by noon I got worried. I tested for a temperature. She didn’t have one. Just in case, I shoved some elderberry goop down her throat, which she definitely didn’t appreciate. After that, I stood back and watched, not liking the fact that she hadn’t had anything to eat or drink during the day.

It was almost dark before she got up to return to the shelter. That’s when I saw the limp. I breathed in relief, now sure I knew what had happened. One of her sisters had swung a massive head (they’re at about 300 pounds now) and hit her in the shoulder.

Although that explained her limp, it didn’t explain her lack of appetite. If there’s one thing pigs do no matter what, it’s eat. Sure that all she needed was some encouragement and an easy meal, I stuck a bowl under her nose the next morning. She turned her head to the side. By 10:00 AM she hadn’t left the shelter or touched her food. That’s when I knew I had no choice. She was suffering and that’s something I don’t allow.

However, that didn’t stop me from addressing the Powers That Be with my not-so-rhetorical question. It hadn’t been enough to lose a cow and a calf on Tuesday? Now, ready it or not, I had to say good-bye to another of my animals.

Farming is always about managing death, not life. I’ve known that from very early on in my life here on the farm. And although the piggy girls were always intended to fill a freezer, albeit after a very nice life spent grazing grass under a warm Arizona sun, it was still a “straw” moment.

Come December I’ll be down to five sheep, Tom, one turkey hen to be his mate, and that hen’s sole surviving son. The New Year is always a good time to reassess. I’ll keep you posted.