I love that saying: Red sky at night, sailor’s delight; Red sky at morning, sailor’s warning.   I didn’t know know until my fabulous step-daughter Amberly Neese informed me that this saying has its roots in the bible, in Matthew 16, v 2-3: “When in evening, ye say, it will be fair weather: For the sky is red. And in the morning, it will be foul weather today; for the sky is red and lowering.”  Or, that Shakespeare had used it in his play Venus and Adonis. “Like a red morn that ever yet betokened, Wreck to the seaman, tempest to the field, Sorrow to the shepherds, woe unto the birds, Gusts and foul flaws to herdmen and to herds.” 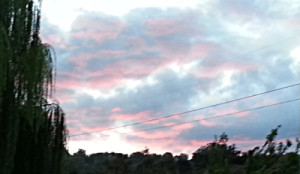 As a committed (committable?) sky watcher and novice weather soothsayer I want this adage to be true. This is because I don’t have a television and never get around to listening to the radio, therefore I never know what’s being predicted weather-wise.  If I could trust this little ditty, if it were a hard and fast rule, then foretelling the weather would be easy, or rather easier for me.

Then yesterday morning, after I thought the wonderful pluvial storm had moved on and we were in for a spate of dryer weather, there I am standing under a dawn sky that was tinted a beautiful red.  Or at least what I consider to be red as far as sky colors go.  As dawn progressed, the clouds got even rosier.

That totally shot my theory to pieces.  How could the sky be red when the storm had been and gone?  So I went to my go-to research source, Google.  I think I’ve said this before, but what did we do before Google?  Oh yeah!  We sat on the floor in the library stacks and pulled out book after book, scanning content for the ONE fact needed to move the story forward.

And of course there’s a page that explains the post-storm red sky. My long ago high school science classes had taught me that the colors we see in the sky are because of the dust and water vapor in the atmosphere.  If the sky is full of dust and moisture, we see red because the color red has the longest wavelength and are less likely to be broken up by the particles in the sky. At sunrise and sunset, the low sun is sending light through the thickest part of the atmosphere, so there’s more likely to be a colorful display.

Since weather usually moves from west to east for those of us in the mid-Latitudes, being driven by the prevailing westerlies (now, there’s a sailor’s term), our storms most often move in from the West.  A red sunset should then indicate the forefront of a high pressure system, or stable air coming our way.  Good weather should follow.  However, red in the sunrise, especially a fiery red–not the tepid rose color in my photo–could mean high water content in the air, or that the high pressure system has moved on.  So, rain could be on the way. Or not.

Well, darn.  It turns out that the color of the sky is pretty much the same guessing game that the weatherman plays.  I may have to repurpose this little ditty as something I just happen to sing to the turkeys as I’m opening their coops and appreciating a beautiful morning sky.

← Pluviophile
Something in the Turkey Coop →