I’m presently in glacier mode–moving very slow and feeling incredibly lazy. Post-book vacation, which thus far has consisted of reading other people’s books. This is something I haven’t done in a really long time. If I had known I’d lose my ability to read fiction upon becoming a fiction writer, I’m not sure I would have decided I wanted to write a book.

But downtime has given me the space to review where I am on the farm at the moment. The little ram lambs are all going strong and getting bigger every day, but I have three more months before I need to think about what comes next for them. (Not on the list yet.) I’m not certain I need to hire in a ram, given the break-ins I wrote about last week, but I probably will.  (On the list.)

This set of Cornish Cross chicks are doing exceedingly well considering we had three 18 degree nights over the past week. It’s now settled into a balmy 27 degrees at night. I rigged up some insulation panels and doubled up the lights, and went out several times in the middle of the night to see how they were faring. That they were up and walking around–not all huddled under the lamps–suggested they were warm enough. Whew.  Now I’m sorry I didn’t reorder the Red Rangers. They turned out to be a far bigger win for me than I expected. Although they took 2.5 months to reach their full weight rather than the Cornish’s 2 months, they gained far more weight in those last 2 weeks, doing it by eating mostly grass.  More importantly, they were completely feathered at 30 days. The Cornish never actually get all their feathers. So I’ve decided the Red Rangers are actually a better deal for me, not to mention I had a number of roosters who topped 10 pounds. (Order Red Rangers from now on–on the list.)

And that brings me to the rabbits. I’ve been having an existential crisis over my three rabbits. Oh, the bunnies are doing fine. They get more attention than they like, I think. The sheep are constantly putting their noses up to sniff them or, more likely, sniffing for any good hay they can steal from the bottom of the cages. A number of the laying hens get a kick out of flying up to sit on top of the rabbit cages. Radha dances around under their cages, giving that bark that says she very much wants to “play” with them. I’m sure that would go well and I’m pretty sure they’re not interested in having anything to do with her.

But I look at the three separated creatures in their lonely little prison cells and cringe. You see, everything on the farm free-ranges, albeit sometimes to their detriment. Perhaps you recall the eagle eating my laying hens earlier this year?  That doesn’t stop me from thinking keeping rabbits caged like that just isn’t right for me.

Three days ago, I decided I was going to sell them, or even give them away.  I just couldn’t bear it any more. Of course the next morning, SB (scaredy bunny–my male rabbit) greeted me by dashing around his cage and throwing his half-chewed toilet paper tube around as if in joy. Big girl, the larger of the two does, gave me the stink-eye, which is her usual greeting, then she put her toilet paper tube in her water. Little girl, the other doe, touched her nose to my finger in greeting. Well, dang it. They’re my rabbits now.

So the next step? 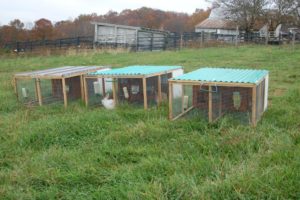 (Top of the list.) Build a three-rabbit tractor for breeding rabbits.  I found pictures and plans on-line. I have a bunch of ready-to-reuse wood in the barn. Vacation’s over. Time to get back to work.