Well, I did it. I got Radha her own puppy. This past week Bear hasn’t been able to play with her at all and she was clearly bored. Since a bored Radha is not a good thing, I gave in and told the Powers-That-Be that it was time for a new dog. And, as often happens with me, when I ask, things happen. In this case the thing that happened is that I went to Tractor Supply and noticed the sign for the Humane Society shelter on Mingus, the side road.

I figured that was a “sign”–in the omens and portents sense of the word. So after I picked up the wire mesh for my rabbit tractors, I went to visit the shelter. They were closed to the public just then, but I met a volunteer walking a dog outside. We chatted briefly about my situation, which was that I needed a companion and partner for a livestock guardian dog. She mentioned that they had a four-month-old German Shepherd puppy. That sounded interesting to me, so I made an appointment to come with Radha and meet the pup. 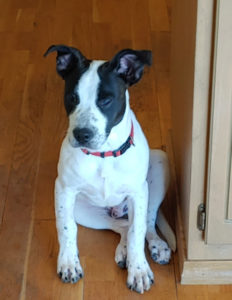 We were both disappointed. Not only was the puppy “shy” (that’s another way of saying “feral,” I think), but her unnatural crouch practically screamed hip dysplasia. Startled–because I was sure I was supposed to find “the dog” here today– I put Radha back in the truck, then wandered through the kennel area. None of the dogs felt right. Once back in the lobby, I glanced over at a glassed-in cubicle. In it sat a black-and-white puppy. Actually, I thought he looked like Nipper, the old RCA mascot, or maybe a Jack Russell Terrier. As I watched him, he met my gaze. There was brute intelligence in those eyes.

I asked why he was isolated. It turns out that the little guy had had a nearly fatal reaction to his first set of vaccines. This had left him temporarily paralyzed and with Hydrotropic Osteodystrophy, or spaces (inflammation) between his bones and joints. I was assured, however, that he was steadily improving.

I almost laughed as I understood why the Big Guy in the Sky had sent me here. Who better to take a vaccine-injured dog than me, whose children had both been vaccine-injured? I know the drill. Support the liver as you chelate out the adjuvant that caused the damage, keep the food clean and fresh. Nothing artificial, no pharmaceuticals. He’ll be right as rain soon enough.

I asked to see him with Radha, so off we went. The two dogs didn’t interact much, but they were calm together. By the end of that walk, I was certain enough to take Rupert home.

We were hardly down the ramp to the barn on our maiden walk when Rupert noticed my ewes. They’d all come rushing to the fence to check out the stranger. Just to see what he might do, I opened the gate. Rupert was off like a shot, nipping at their ankles, driving all six of them toward a corner. Aha! There’s Heeler or Border Collie in him somewhere!

Chasing the sheep set off Radha. She began bouncing around him, trying to convince him to play. I can’t blame the little guy for hesitating. She’s three times as big as he is. Although she understood he was saying “no,” she refused to accept that or to stop bouncing around him until he gave in. They tussled for just a moment then he came back to stand between my legs. Too wound up to quit, Radha raced for Bear. She hit him the way she always does, like a freight train. Then growling as if she meant to kill him, she buried her teeth in the big boy’s thick fur.

Rupert burst into motion. Barking like crazy, he raced toward Bear as fast as his little legs could carry him. I thought he meant to join in the play, but no. He put himself between the massive Kuvasz and the rambunctious eighty-pound Anatolian, then did his best to protect Bear from that nasty Radha. I almost fell over, I was laughing so hard. This was definitely THE dog. Small and fragile he might be right now, but man oh man, has he got heart! 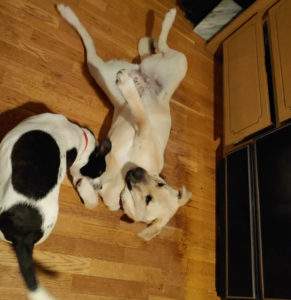 It took a little more than twenty-four hours of Radha taunting and tempting him before Rupert finally let down his guard. They were in the kitchen, he doing his best to hide from her between my legs . At last, she rolled onto her back and looked up at him. The little tart knew what she was doing. Rupert instantly threw himself on top of her and grabbed one of her ears. The bout lasted for at least half an hour. When it was done, it was clear that I had me a new dog.

Today, I watched as Radha led Rupert along the path on the wild hillside. She kept pace with him, only occasionally moving down a hillside as if to show him something, looking over her shoulder to invite him to follow. And follow he did.

Yeah, there’s no doubt. He is the perfect dog for her. It’s going to be good for both of them, and what’s good for them is good for me. All I’ve got to say is Thank You.