That’s right. It’s weaning time. Yesterday afternoon I locked the seven little lambikins into one of the alleyways, away from their mothers. No more sheep milk for them!

For the first few hours their mothers weren’t the least upset about this. After checking on their little guys from the other side of the handy panel, they acted like they were having a “girls’ day out.” When I opened the gate leading to the orchard, they shot through it and spent more than an hour grazing on thick green grass, nibbling on newly set on winter squash and, for some ungodly reason, eating my Serrano pepper plants. What animal (other than idiot humans) eats whole Serranos?  As they grazed, they’d occasionally respond to their crying babies, doing so without even lifting their heads from the grass. It’s as they were saying “Sorry, kids! Sink or swim!”  Even Mari, the best mom of the bunch, turned her back on her babies.

It wasn’t until time for the usual evening feeding rolled around that the ewes paused to consider that they no longer had access to their babies. They returned to the front pasture without having to be chased. I had the gate to the next pasture open for them, but– as I expected–they stopped in front of the alley in which I had imprisoned their babies.

Of course by now, even Tiny’s three little guys are crying at being separated from Mama. Tiny has already pretty much weaned her three. I wasn’t surprised by that, not with three and not with The Albino (that’s sort of become his name) now half her size. That makes The Albino the same size as Milly’s giganto-lamb, Blackleg.  Mari was the only ewe who was still consistently nursing her babies, Rosie having always been slapdash about her little girl. But then, Mari’s Mr. Headbutts and his sister are the smallest of the seven.

As you can see, even when I forbid myself from naming my critters, they end up with names. This includes the free replacement bunnie/buck that the breeder very nicely and unexpectedly sent to replace the rabbit who died from stress last week. His name explains it all: Scaredy Bunny.

Moving Scaredy Bunny from the cat carrier to his new cage resulted in my arm being seriously scratched. He then huddled at the back of his cage for the remainder of the day. That had me worried that, like his brother, he wouldn’t last the night. Instead, he was still alive the next morning. But when I opened his cage to feed and water him, he panicked and tore around the cage in frantic circles. I started to slam the cage door closed but he was through it before the latch clicked.  As he hit the ground I figured he was done for. I was back there with Moosie and there’s nothing that dog likes better than to chase rabbits–they’re fast and unpredictable. Luckily for Scaredy Bunny, he sat on the ground and looked around him in complete confusion. Perhaps because never seen the world except through rabbit wire? I was incredibly grateful that, this time, when I picked him up all he did was scream like he was being killed.

There hasn’t been another escape attempt since and, as of today, we seem to have achieved a rapprochement. He touched his nose to my finger this morning and stood quietly as I opened the door to add hay to his cage. 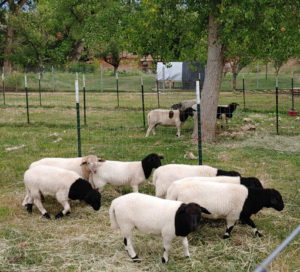 Back to my upset lambs. The mamas considered their trapped babies for a bit, then walked into the next pasture where they began to call. The babies called back. And so the evening went, mamas calling, babies answering. It’s always startling when I realize how unique each animal is. Each of these lambs has a distinctive voice. Blackleg is especially identifiable. If he were human, I’d say he’d grow into a man with a profundo basso voice.

As night fell, the calling become even more urgent. I moved the moms into the alley next to their babies, thinking they might snuggle up to the fence to be close to their babies. Only Mari spent any time near the fence line. Tiny, Rosie, and Milly went where the grass took them, still calling to their babies. It was as if they were saying, “I’m right here, darlings. You’ll be fine.”

Oh, yeah. It was definitely time to wean.

For the little ram lambs, this separation is permanent. Since I refuse to castrate due to the possibility of Tetanus, they won’t be going back in with their mothers. The two little girls will eventually rejoin my ewes, but only after I find a ram to borrow and am certain my four ewes are pregnant once again. That means at least a month apart. Here’s hoping that it doesn’t stay as noisy as it is now for the next thirty days, otherwise earplugs may be required.