Peanut is killing me.

Once upon a time, back say about fifteen years ago, I had no trouble working twenty hours a day, grabbing four hours of shut eye, then going at it again come 7 AM.  If that sounds stupid to you, I’ll admit that even farther back, say in 1994, I wrote Summer’s Storm on the same schedule while eating pretty much only peanut M&Ms. Needless to say, the crash came in the middle of the following book, Spring’s Fury.  Some time later, I ended up off all food, consuming nothing but Ultra Clear for two months, then went on the food rotation diet for almost three years. There’s always a price to pay.

However, even a health crisis wasn’t enough to stop my long days and night owl ways.  It’s how I write.  I need long blocks of time and quiet to turn the stories in my head into the written word.  Back when I was married and still a city dweller, it was far easier for me to write in the middle of the night.  Of course, that was when I owned only cats. There was no dog barking at every errant smell.  In the middle of the night no one interrupts your self-induced hypnotic state, startling you out of your intense concentration to ask foolish questions like “What’s for dinner?”   That was usually the moment I realized I’d missed both breakfast and lunch while the words flowed.

Given my past experiences, I do know that playing fast and loose with my bio-rhythms is not a good idea. Apparently, there’s some science to support this. A friend of mine who is an ace researcher and is presently battling cancer informs me that not getting enough sleep AT NIGHT–it’s not good enough to sleep late or take a catch-up nap in the middle of the day–is one of the conditions that helps invite in cancers.

Then I became a farmer and my sleep patterns had to shift.  I have no choice but to be up at dawn when the chickens, turkeys and sheep want to get out and start consuming grass.  Just now, Miss Piggy couldn’t care less if she stays in her comfy, presently composting hay bed or wanders down to the former sheep pen/turkey brooder coop where she sleeps in the other comfy, presently composting hay bed she created there.  She is playing the pregnancy card with all her might.  “I’m pregnant.  Can you just scoot my food a little closer?”

Of course, as my sleep patterns shifted, so did my writing hours.  Unfortunately, there are fewer hours available for my use during the sunlit portion of the day than there are at night.  And, getting up before dawn then doing some seriously physical work during the day means I’m tired by sundown, making it more difficult to write in the evenings.  (I refuse to admit that age anything to do with this.)

Then came the sheep.  First, it was walking out all those nights to check on Tiny before her delivery, which, as you may all recall, happened in the middle of the brightly lit day.  Pfft!  Now, it’s Peanut and bottle-feeding.  For a while I clung to the false hope that he might go through the night outside with his siblings.  That’s definitely not on his agenda. It seems he’s scared of the dark.  As dusk falls he makes his way up to the house and calls to me from the base of the porch stairs.  He hasn’t figured out how to climb stairs yet although he has mastered the art of tumbling down them to follow the dogs.  This resulted in a quick plunge into the ditch one day. Thankfully, sheep swim instinctively and he was on the bank before I reached the ditch to rescue him. 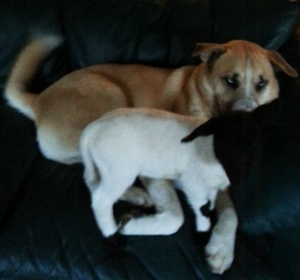 Having a lamb in the house at night has turned out to be less intrusive than I expected.  Other than the piddling, Peanut is pretty low maintenance. All he asks is a nice towel, a bucket full of alfalfa flowers and Moosie on the couch for him to sleep with. Well, that and a bottle at 11:30 PM and another one at around 5:00 AM.

He doesn’t need to make a noise to get those bottles.  I am not only a night owl, I’m a terrible sleeper.  One of my ex-husbands once said that ants walking across the windowsill could wake me.  In this case it’s the tippy-tapping of Peanut’s hooves as he leaves his dog for my bedroom and his bottle.

After managing to tread water on so little sleep over the last few months, it’s finally caught up to me.  I’m addled these days and it hasn’t been pretty. Last week, I missed two appointments because I marked them incorrectly in my calendar.  Writing has been impossible.  I’ve begun to forget little things, like closing the extra door on the turkey coop or leaving out one of the waterers.  It’s not hot so there was no harm done, but that’s just unacceptable.

Given that, I’ve decided to try returning to bed after all my critters are out and doing their thing.  Not only does that cut two good hours from my already foreshortened day, it’s a hopeless endeavor.  The sun’s up and so am I.

That leaves me only one choice.  Now that Peanut is over a month old, I keep repeating “I can wean in three weeks.”  Yes, three months on the bottle would be better than two, but I’m not sure I can take much more.

That’s not true.  I have two choices.  I could sell the bunch of them and really be sheep deprived.

Not happening.  Dang that little guy.  I really like him.