Oh no!  I can’t believe it’s happened.  Hundreds of turkey eggs and only 8 hatchlings to date.  Oh, Tom!  Five years old and no longer the virile young man that he was four years ago. Well, more like three and half years ago.  It took him a year and a half to figure out how to effectively fertilize eggs.

If you’ve never seen turkeys mating, it’s a complicated dance, and I do mean dance.  The tom inflates his breast (there’s a membrane between his muscles and his skin that he fills with air), then stomps his feet, tapping his toes twice on the ground on each side, shifting from side to side as his wide-spread tail moves back and forth.  I’ve been to Powwows in the past.  Well, the first time I saw Tom dancing, I recognized the connection right away.

As for the actual act, if the hen’s receptive, she’ll walk around and around the tom, brushing herself against his breast, then crouch so he can climb on her back.  After that, it’s all a balancing act.  Yep, the tom has to keep his balance on that slippery slope as he shifts his tail to the side and makes a 3 second dip that should guarantee new turkeys.  Let me say that the first time a young tom tries it is pretty hilarious.  Tom’s first attempt had him slipping, sliding and finally toppling over the front of his poor girl.  She was definitely wondering if she’d made a big mistake choosing him.

My replacement tom, Tommy II, isn’t quite old enough to do the job, although I’ve seen him trying.  He’s still in the slip-n-slide mode.  Worse, the girls aren’t really interested in him, not when Tom is such a suave and handsome devil.  But Tommy II will be ready to take over once Tom is no longer in charge.

The two Toms are good together, which is pretty unusual since toms are supposed to fight for dominance.  But these two act like father and son, or at least partners.  They’re rarely more than a few yards apart. And they’ve become “The Protectors of the Flock”.  This is akin to being “Guardians of the Galaxy”.  That’s because there is no creature more alien looking on earth than a tom turkey.

Last week, a pair of ravens swooped in, looking to steal eggs and/or poults.  I watched as the two toms arranged themselves in battle mode, breasts inflated and tails spread.  The ravens were using a “divert and conquer” strategy, which had one bird swooping down in the hopes of distracting both toms giving the second bird a chance to go for the kill.  Tom and Tommy II were onto them.  They shifted until they stood tail-to-tail in front of the coop, each one watching his area.  Again and again, the ravens tried to get past them, only to be charged by one or the other of the two larger, albeit ground-bound, birds.  The ravens finally gave up and beat a retreat.  They haven’t come back to try it again…yet.

So now what do I do?  Separating Tom from his flock just isn’t an option, not when it’s clear he serves other purposes than just making new turkeys. Even Tommy II still wants him as part of the family.  I wonder if it’s feasible to separate the hens, giving each tom his own harem?

Dang it, there’s always something. I just didn’t consider the problem of infertility.  Death by mountain lion, coyote, dog, old age, yes, but not E.D.

I suppose there’s really nothing else for me to do but wait for Tom to pass away from old age.  I love that bird.  And the rotting eggs don’t go to waste.  Once the hens recognize they’ve got a “stinker” under them, they roll it out of the nest, sharing that stink with the rest of the world.  This attracts dogs and my dogs LOVE them, eating them like candy.  Yuck.  But there will never be another Tom. That means when Tommy II reaches this point, I’ll have no trouble turning him into a meal. 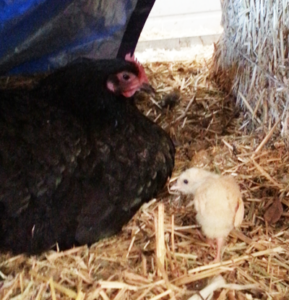 And now a post script from the nesting coop.  Last year, one of my Australorpe hens decided to sit on turkey eggs along with two turkey hens.  The three were steadfast brooders, one of the three going off at a time to eat and drink.  It was funny to watch that chicken hen–a bird half the size of the turkeys–do her best to spread her smaller body over the thirty eggs in that batch.  When the eggs hatched, the chicken treated the turkey poults as if they were hers.  Never mind that she was black and those babies were a bright gold.

Well, she’s done it again this year, this time kicking the turkey hen off the eight turkey eggs she claimed for herself.  One egg hatched, and as far as this chicken is concerned, she got her baby.  I’m not sure what she’s going to think when it outgrows her in a few weeks!

← One Crone Amilking
Always something new →