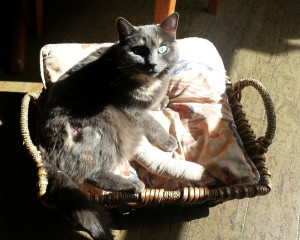 Over the last few weeks, I was growing increasingly worried about my favorite non-pet cat, Shy Girl. All my non-pets have epithets rather than “real” names.  Shy Girl was born under my bathroom sink three years ago along with Funny Face, Little Girl and Little Boy.  Shy Girl and Funny Face are both gray Tortoiseshells; the other two were gray tabbys.  Their mother must have had some Russian Blue in her, because Shy Girl’s fur is a beautiful plush blue-gray color.  I got their mama from the same place I got my first livestock guardian dog Tango, a goat farm out near Seligman.  When I saw all their pregnant cats, all of those cats doing their jobs as mousers, I begged for one.  They gave me two, bless them. However, Shy Girl’s mama was a clever kitty who made her stealthy way into the house when her time came.  Six weeks later, she disappeared, leaving me with four orphaned kittens.

At the time the only cat living in the house was my piss-and-vinegar calico, Waku Oni.  That’s her real name, not an epithet.  It’s really bad Japanese which may or may not mean Crazy Devil.  She’s named in the same vein as my first calico, Wazuka Oni. That’s slightly better Japanese for Little Devil.  Oni #1 was the only souvenir I brought home after living in Japan for six months.  Before you ask, it was easy getting the first Oni into the country.  The USA and Japan have very accommodating treaty in regard to cats. I’m not sure what our shared policy regarding devils is.

Waku is the last of my cats to have received a real name.  Such names suggest longevity.  That’s not something in great supply for farm cats, not with the mountain lions, bobcats, coyotes, javelina, raccoons, skunks, otters, hawks, eagles and owls around here.  Waku was also supposed to be my final house cat.  I was tired of losing animals into which I’d invested not only emotion but significant veterinary charges.  Once I lost Waku’s brother, I promised myself I’d only have outdoor, working cats from then on.  A few years ago, before the animal rescue policy changed, it was nearly impossible to get barn cats.  I begged for feral cats, but the groups I contacted refused when they learned I expected my cats to work for their livings.  It didn’t matter that I was willing to have these cats and their kittens spayed or neutered, that I would provide specially made boxes to sleep in and offer a steady supply of “just-in-case” dry food.  If these feral cats (cats they were intending to put down because they couldn’t adapt to being pets, I should mention) were going to step one claw outdoors, I couldn’t have them.

For the record, barn cats have a long and storied history that stretches back to the very first human agricultural settlements.  Where there’s cultivated grain, there’s mice and there’s no better way to get rid of mice than a barn full of cats.  More importantly, as a woman I relate to cats.  Dogs form patriarchal packs while cats organize into matriarchal families called, of all things, clowders. I’m certain that name came from that same alcohol-infused meeting where a group of well-born Englishmen decided that a flock of Crows should be called a “Murder” and a flock of ravens was an “Unkindness”, not that ravens flock.  Then again, there’s something lyrical about a “Exaltation” of larks. By the way, an unspayed female cat is called a “queen”.  That’s certainly better than the name given to female dogs.  Why queen?  Because when her children approach her, they bow their heads.  Now you know.

Back to Shy Girl and her siblings.  Shy Girl got her name because she was the most feral of the four orphans.  From her first moment, Funny Face–whose face looked like it was sprayed with gray, cream and white–was sure she owned everyone, including the cows.  The other two were normal kittens, but Shy Girl hid whenever she heard footsteps.  We lost Little Girl first, not to a predator but to a dislocated hip, which happened spontaneously and inside while she was playing with her siblings.  The vet who saw her said the only thing she could do was amputate.  Since a three-legged cat here is a dead cat, we paid for the amputation but let one of the vet techs adopt her.  Little Boy went next, the way most of the male cats here have done.  This place is especially hard on Tom cats, since they tend to wander and the farther they go, the more dangerous it is.

Time passed, and my barn cat population stabilized at eight.  I got the “rescue” discount when I had all of them spayed and neutered at once.  Then two of the boys were adopted.  That left six not exactly feral cats.  Four of them definitely preferred the barn to the house, but Shy Girl and Funny Face gravitated to their birthplace and became instead indoor-outdoor hunters.  I had to catch the rabbit one of them brought in, and let me say that wasn’t easy.

Then, long after I’d gotten far too attached, Shy Girl appeared, dragging her back leg.  It was the same leg that her sister had lost after dislocating her hip.  This time, I saw a different vet who simply (!) ground down her hip socket and the head of her femur, then let her muscles compensate for the missing bone.  Eight days after the surgery, Shy Girl caught a mouse in the basement.  Wow!  That was two years ago now and she doesn’t even limp.

Then a month ago, she showed up with a bite on her jaw.  Just like her hip, she healed beautiful.  But over that period of time, I began to sense as I had with others of my cats that she was saying goodbye.  Sure enough, last week, she didn’t come home and neither did one of my female barn dwellers.  Days passed and I was certain they were both gone.  Then, much to my surprise, the barn cat showed up (she’s either Spots or Dots, I could never decide).  An hour later, Shy Girl dragged herself home with a broken leg and a pair of deep bite marks in either hip.

Off to the vet we went.  She’s still dragging that leg but now it’s because it’s in a splint.  The bite marks have a sort skunk/raccoon/fox size to them.  The vet suggested that she’d escaped whatever had her, then broke her foot after that. And, just as always she’s healing up swiftly and nicely.  The only problem is that she doesn’t use a litter box.  That means I’m having to carry her out to my closest garden (dang it!).

For the record, the only other cat I’ve spent any vet money on over these past two years is Waku.  I guess that makes it official.  Shy Girl is going to need a real name.

One Response to Shy Girl